You are here: Home / BookOfTheDay / Danny Chung Does Not Do Maths by Maisie Chan 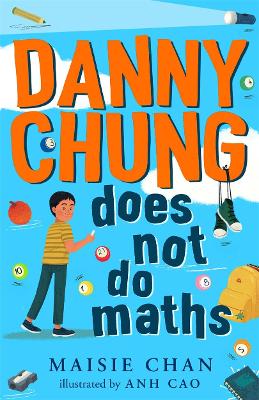 “A hilarious, heartwarming read that is timely and timeless and will surely become a beloved book of middle grade readers. It is also one of the rare – and brilliant – representations of British Chinese families in children’s literature today.” SUNNY SINGH, PRIZE DIRECTOR
* First awarded in March 2017, the Jhalak Prize and its new sister award Jhalak Children’s & YA Prize founded in 2020, seek to celebrate books by British/British resident BAME writers.

Published in 2021 and just announced as the 2022 winner of the Jhalak Children’s & Young Adult Prize.

Eleven-year-old Danny Chung loves drawing more than anything – certainly more than maths, which, according to his dad and everyone else, is what he is ‘supposed’ to be good at. He also loves having his own room where he can draw in peace, so his life is turned upside down when a surprise that he’s been promised turns out to be his little, wrinkly, ex-maths-champion grandmother from China. What’s worse, Nai Nai has to share his room, AND she takes the top bunk! Nai Nai can’t speak a word of English, which doesn’t make things easy for Danny when he is charged with looking after her during his school holidays. Babysitting Nai Nai is NOT what he wants to be doing! Before long though it becomes clear to Danny that there is more to Nai Nai than meets the eye, and that they have more in common that he thought possible.