You are here: Home / Blog / Worth A Look: Winger by Andrew Smith 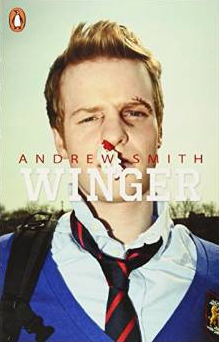 This big (400+page), chunky Penguin was on my To Read list when it came out back in the summer, but every time it rose near the top it was supplanted by something more inviting. Definitely one to consider if you’re looking for a male-voiced coming of age story.

The book was first published in the US in 2013. Here’s an extract from the New York Times Review by A J Jacobs:

Smith is best when writing about the exhilarating torture of a first crush. He captures the excitement even of chaste moments, as when Ryan Dean’s fingers interlock with Annie’s in the back of a car, “our hands resting on the soft fabric of her skirt where it draped over her thigh.” The tension was such that I had to skip to the end to see if they hooked up.

This is Andrew Smith’s sixth young adult novel — he is perhaps best known for “Marbury Lens,” a dark, strange tale about a teenager who is given magic glasses that allow him to peer into a parallel world of giant insects and clawed demons. But it’s a bit of a departure. For one thing, it’s Smith’s funniest book by far. With “Winger,” Smith has adopted a convincingly adolescent writing style. Our narrator has a weakness for one-word sentences like “Ugh” and “Crap.” He’ll use absurdly long hyphenated modifiers, as with this description of how the football players spoke to him: “in a very creepy Greek-chorus-in-a-tragedy-that-you-know-is-not-going-to-end-well-for-our-hero kind of way.”

There’s also plenty of meta-­commentary. “That was a really long sentence, wasn’t it?” he writes at one point. Not to mention a bunch of gross-out humor, including several bathroom scenes and a “catastrophic penis injury.” And cartoons! Ryan Dean is a nascent artist, so we get drawings, Venn diagrams and charts, many of which deal with his libido.