You are here: Home / BookOfTheDay / The Original Bambi: The Story of a Life in the Forest by Felix Salten tr. and introduced by Jack Zipes ill. by Alenka Sottler 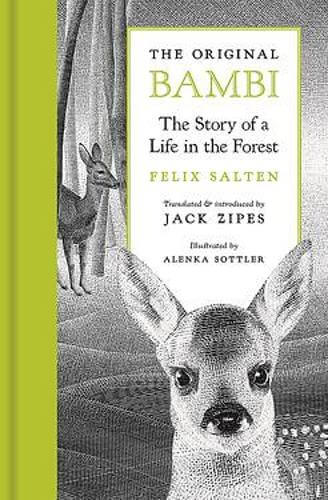 “We hope this translation will lead a new generation of readers to discover Salten’s book. It’s certainly accessible to children, but adults are more likely to fully appreciate the book’s moving and carefully observed depictions of the natural world, the cycle of life and death, and the threat humans pose to animals.” Anne Savarese, publisher
“It is… firmly lodged in the boomer brain as a child’s tale, which is precisely why this new translation from Princeton University Press is so welcome. Because it turns out that “Bambi” is quite remarkable: a meditation on powerlessness and survival told with great economy and sophistication.” New York Times
“Zipes, a professor emeritus of German and comparative literature at the University of Minnesota, who has also translated the fairy tales of the Brothers Grimm, maintains in his introduction that Chambers [original translator]  got “Bambi” almost as wrong as Disney did. Which raises two questions: How exactly did a tale about the life of a fawn become so contentious, and what is it really about?” New Yorker

Most of us think we know the story of Bambi—but do we?

Listen to an interview with the translator, Jack Zipes:

This new, illustrated translation of a literary classic  presents the story as it was meant to be told. For decades, readers’ images of Bambi have been shaped by the 1942 Walt Disney film—an idealised look at a fawn who represents nature’s innocence—which was based on a 1928 English translation of a novel by the Austrian Jewish write,r Felix Salten. This  new translation gives contemporary readers a fresh perspective on a moving allegorical tale and provides important details about its creator.

Originally published in 1923, Salten’s story is more sombre than the adaptations that followed it. Life in the forest is dangerous and precarious, and Bambi learns important lessons about survival as he grows to become a strong, heroic stag. Jack Zipes’ introduction traces the history of the book’s reception and explores the tensions that Salten experienced in his own life as a hunter who also loved animals, and as an Austrian Jew who sought acceptance in Viennese society even as he faced persecution.