You are here: Home / Blog / The Many Lives Of Ruby Iyer by Laxmi Hariharan – ACHUKAreview 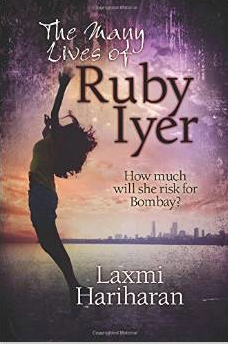 Despite being poorly copy-edited and overlong – at just under 300 pages it is not a very long novel but could usefully have lost at least 50 of those pages and been all the better for it – I did enjoy this book, especially its first half, during which the emphasis is on Ruby and her apparently gay flatmate Pankaj. The repartee between these two is very well done. Later, when Ruby does her female Robocop turn of saving Bombay from a gang of teenage terrorists (with echoes of the 26/11 Mumbai massacres), the novel runs into action overdrive and the focus shifts to Ruby’s relationship with two older testosterone rich men.
Early on in the book Ruby is molested on a railway station by a Hand, and pushed off the platform onto the live wire in the path of an approaching train. She is dramatically saved but carries the physical and emotional scars of this experience throughout the novel. Emblematic of the strength she draws from having survived such an experience is the tree-branch-like scar on her back, tattooed into her by the electrical charge from the live rail, which stirs into life whenever she is in danger and gives her computer-game-like powers.
Hariharan writes vividly and evokes the metro-city life of modern Bombay extremely well. Although I read the book in print form, the author (who has had a career in marketing) has been active in promoting its Kindle ebook format, which is currently available for just 99p. The print edition is £6.95.
It’s a YA rather than adult action novel but not at all ‘teeny’. A sequel is in preparation.

via The Many Lives Of Ruby Iyer.