You are here: Home / Blog / The Lost Child of Chernobyl by Helen Bate 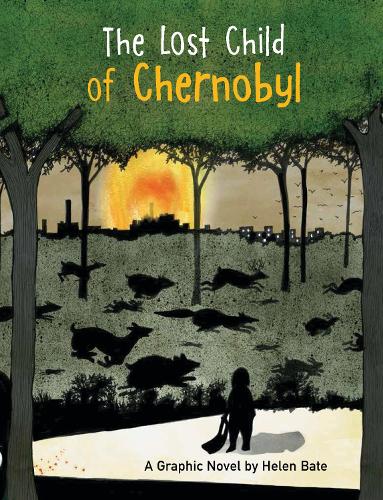 “As a children’s writer and illustrator, I try to provide children with an understanding of important events from modern history, and difficult social issues that have relevance to their life today. I believe it allows them to see their world in more context. Seeing that many people have overcome terrible adversity, that life continues and is OK again is important, especially in a world where children face a future of increasing global problems.” Helen Bate, writing in BfK

One April night, people living near Chernobyl see a bright light in the sky…Everyone is told to move out of the forbidden zone around the destroyed nuclear reactor, but two stubborn old ladies, Anna and Klara, refuse to leave.

Nine years later, the forest wolves bring a ragged child to their door – a child who has been living with wolves in the forbidden zone. Who is the lost child of Chernobyl and will Anna and Klara be able to find the child’s family after all this time?

Inspired by the real events of the global environmental disaster at Chernobyl in April 1986, this haunting and deeply relevant graphic novel is about the place of humans in the natural world, about healing, survival and the meaning of home.

From the award-wining author of Peter in Peril, USBBY Outstanding International Book, and Me and Mrs Moon.

“Since watching a wonderful documentary The Babushkas of Chernobyl by Holly Morris and Anne Bogart I’ve been fascinated by the stories of the older women who continued to live (and die) in the forbidden zone. Basing my story around the experiences of Klara and Anna, two fictional sisters who stay behind, allowed me to portray the actual events that took place from their perspective. The book Voices from Chernobyl written in 1997 by the 2015 Nobel Prize winner Svetlana Alexievich, was another fantastic resource with many first-hand stories of what took place after the explosion and crucially, how people felt about their situation.” writing in BfK