You are here: Home / Archives for Waterstones 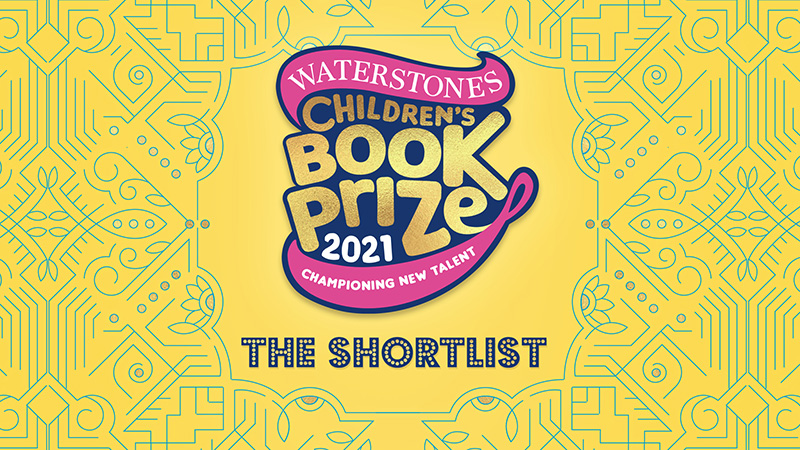 When Life Gives You Mangoes by Kereen Getten (Pushkin)

A Clock of Stars: The Shadow Moth by Francesca Gibbons, illustrated by Chris Riddell (HarperCollins)

A Kind of Spark by Elle McNicoll (Knights of)

Found You by Devon Holswarth

The Grumpy Fairies by Bethan Stevens

The Blue Giant by Katie Cottle

Where Happiness Begins by Eva Eland

The shortlists for the Waterstones Children’s Book Prize 2019 (announced today) are as follows:

Congratulations to all involved with the shortlisted titles.

The winners will be announced at an evening reception at Waterstones Piccadilly (London), Europe’s largest bookshop, on Thursday 21st March, 2019. The winner of each category will receive £2000, with the overall winner receiving an extra £3000. In the event that the prize is awarded to a partnership, then the prize money will be split equally between the joint winners.

First awarded in 2005, the Prize has evolved into one of the most prestigious accolades for children’s books in the UK.  Now in its fifteenth year and with its shortlists exploring some highly topical subjects, the Prize shows its enduring relevance as a formidable platform for emerging talent.

Last year’s winner, The Hate U Give by Angie Thomas, shot to the top of the bestseller charts after the announcement and saw an increase in sales of over 900% across the Waterstones estate.

Florentyna Martin, Waterstones Children’s Buyer says: “This year’s list showcases an exploration of wide topics including world-folklore, black history, mental health, refugees and the world around us, through dynamic forms of poetry, fables and sweeping fantasies. It is a truly enthralling time for children’s writing, and our booksellers have keenly chosen shortlists that they are inspired to share with readers and, in doing so, recognise the creators who will shape the future of children’s stories.”

James Daunt, Waterstones Managing Director says: “We are immensely proud of our Children’s Book Prize. It has chosen unfailingly wonderful books and in so doing propelled the careers of a succession of exceptional authors. Who knows how many might otherwise not have achieved such success? The Prize is the work of our booksellers and represents Waterstones at its very best.”

All the shortlisted titles will have “Shortlisted for the Waterstones Children’s Book Prize 2019” added to their listings entry over the next few days and we will be highlighting several of the titles during the six weeks leading up to the category and overall winners announcement on 21st March.

Previous Winners of the Prize are:

It was fantastic to see the hashtag for this prize (#WCBP) trending on Twitter yesterday – testimony both to the level of interest the general public now gives to children’s books and the push and publicity that Waterstones has brought to this signficant award.

Rob Biddulph was announced as the overall winner of the Waterstones Children’s Book Prize at the booksellers’ Piccadilly HQ with his picture book, Blown Away! 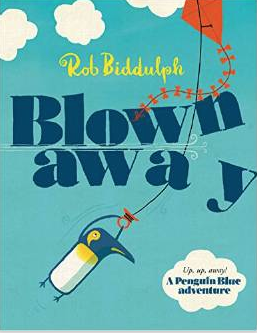 The Waterstones Children’s Book Prize is now one of the biggest children’s book awards in the country. There are three shortlists for the Best Illustrated Books, Best Fiction for Teenagers and Best Younger Fiction, with category winners as well as an overall winner.

Melissa Cox (Head of Children’s Buying) had this to say of the winner: “The test of a good picture book is not how good it is on first reading, but how enjoyable it is on its fiftieth. Blown Away more than delivers – its whimsical, madcap plot engages immediately and its rhythmic text drives the story along while the illustrations charm and thrill on every page. It is truly wonderful, and a very worthy winner.”

James Daunt, Waterstones MD, said: “This year we have another wonderfully inspiring Prize that is testament to the extraordinary vibrancy and creativity in children’s publishing.”

Every one of the winning books’ Amazon reviews is a 5-star recommendation. Rob Biddulph is art director for the Observer Magazine and a winner of the PPA Designer of the Year Award. Blown Away is published by HarperCollins.  The Waterstones Children’s Book Prize Prize champions new and emerging talent in children’s books. It has been running for 11 years and this is only the second time a picture book has been selected as the winner.

The winner of best young fiction category was Robin Stevens with Murder Most Unladylike, the first in the author’s series of boarding school mysteries, featuring schoolgirls Daisy Wells and Holly Wong of Deepdean School for Girls. The second Wells & Wong Mystery, Aresenic For Tea, was published in January and the third, First Class Murder, is due in July. The books are published by Corgi. 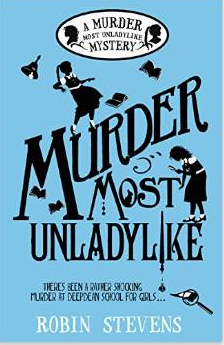 Stevens has a very serviceable responsive website, with some interesting author facts on the About Me page.

The winner of the teenage category was Half Bad by Sally Green, the first title in a series that Penguin have high hopes of becoming a franchise in the style of The Hunger Games. The momentum is building well and the second title in the sequence, Half Wild, has just been published. 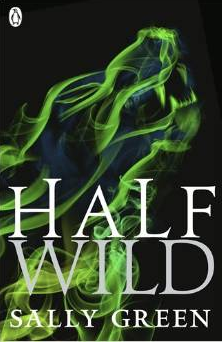 The other titles on the shortlists, which included recent YA Book Prize winner Only Ever Yours by Louise O’Neill, were well-chosen and superbly presented and publicised by Waterstones. The one book that I feel has been strangely overlooked by this award, and by the other prize that focuses on emerging talent, the Branford Boase Award, is Close To The Wind by Jon Walter (published in hardback by David Fickling Books last summer and now available in paperback), a novel that I continue to enthusiastically recommend whenever the opportunity arises. 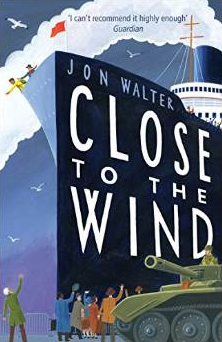 Waterstones’ flagship Piccadilly store is expanding its children’s section after a sales increase of 20%.

The children’s area will take up two-thirds of the second floor and will include a bigger picture book and board book range, a new YA space with crossover titles like Harper Lee’s To Kill A Mockingbird, and an area for related products such as party packs and toys.

At long last Waterstones has a website worthy of a big bookselling retailer.

The new look/design is a huge improvement on the ‘pathetic’ [Daunt’s own description] previous offering.

The site is beautifully ‘responsive’, making it user-friendly on whatever device you’re using.

The landing page is crisp and clear. 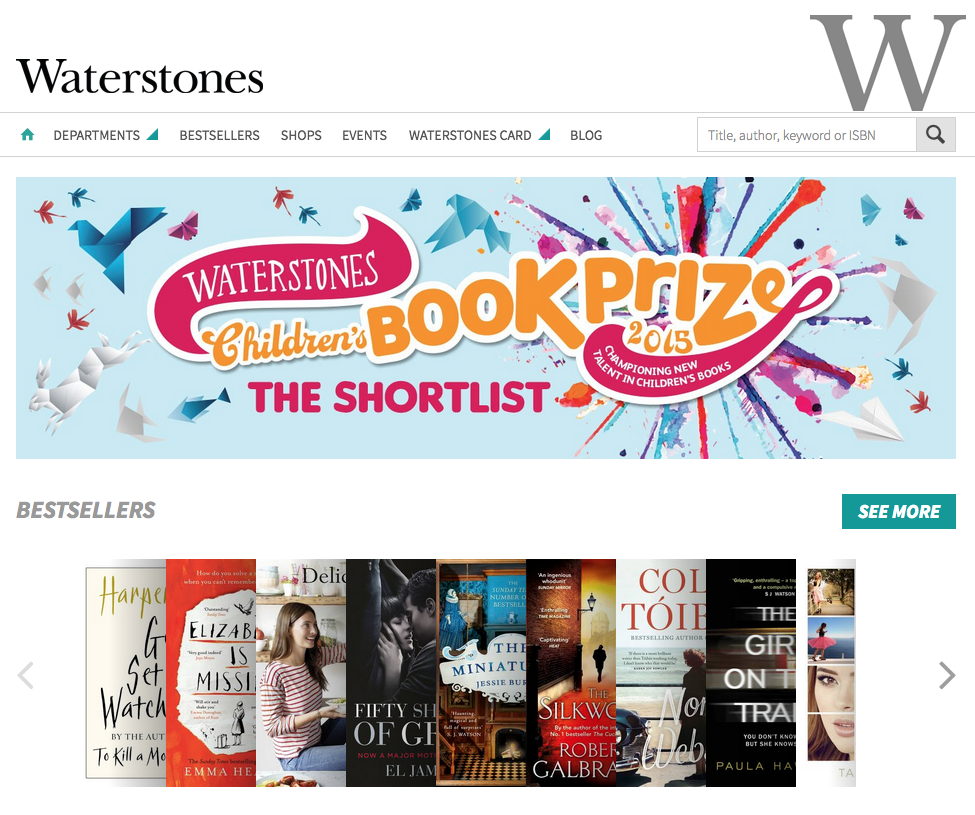 And the navigation tab opens up to show a full listing of the online shop’s different ‘departments’.

I would like to see more detail on the individual title listings. The Publisher and ISBN should be included in the box that shows the price, rather than underneath the synopsis. 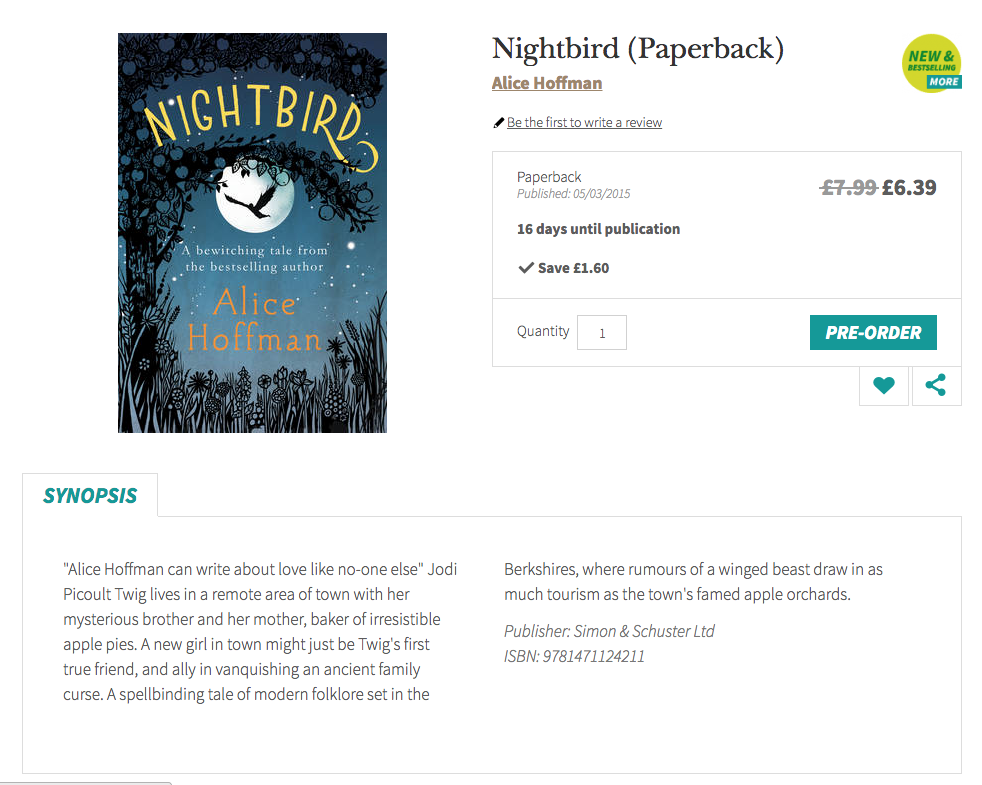 Amazon is more successful in summarising basic descriptive information. For the same title:

And also in linking to other editions.

But all good websites are works in progress and I’m sure Waterstones will want to make improvements in its listings design in the weeks and months ahead.

What the site does really well is promoting its John Lewis style Click-and-Collect service. A good deal of thought has clearly been given to making the website a user-friendly experience for this type of buying. In most cases, the online price will be lower than the store price.

How well this works out in practice will be a determining factor on customer satisfaction. It does mean that individual stores will need to be very on top of their stock audits and that this information will need to be updated to a central database. I assume that this will be done through the till, at point of sale. It is not altogether clear whether the click-and-collect service will apply to same day purchases.

It’s been a time a-coming, but on the whole then, an extremely promising relaunch.

The UK’s leading high street bookseller said that sales of the Kindle ebook reader had plummeted this Christmas as a physical books market battered by ecommerce showed signs of improvement.
Waterstones said that sales of Amazon’s ebook reader had “disappeared to all intents and purposes”. The lossmaking chain of 290 bookshops had previously touted Kindle as the way to “solve the digital question” in 2012 when it launched a partnership with Amazon to sell the devices.

However, physical book sales at Waterstones rose 5 per cent in December as the company reaped the benefits of its store refurbishment programme and a relinquishing of control to local store managers who could respond to the tastes of local communities, said James Daunt, chief executive.

Foyles, the London chain of bookstores, said like-for-like sales of physical books had risen 11 per cent this Christmas. Sam Husain, chief executive, said sales of Barnes & Noble’s ebook reader the Nook were “not as impressive as one would expect them to be” and that physical book sales had outperformed ebooks.

We have a lot of different markets.’ In what way? ‘Much as Asda sells different things to Waitrose. If you pile up the latest celebrity thing in Hampstead for 1p, it ain’t going to sell. And if you pile up an esoteric history in Gateshead, it isn’t going to shift. We have different books on display in Harrogate than we do in Kensington, for blindingly obvious reasons. There’s a different economy outside London. In Middlesbrough half the high street is vacant and there isn’t a lot of money. It’s a town that’s in big trouble, but our shop has reinvented itself there; it’s got rocking horses and pretty much all day long pre-school kids are sploshing about with paint. It’s not the most profitable shop, but it’s got spirit.’

In the Kensington branch they sell a lot of Scrabble and Monopoly. In St Pancras it’s novellas that you might finish on your journey: ‘Those sell in huge quantities.’ In Trafalgar Square it’s Union Jacks; in Walthamstow, they shift ‘a ton’ of camera-lens mugs (left). Huh? ‘It’s a mug with a lens on it. We sell billions.’

So bookshops are surviving on mugs, wrapping paper, cards… ‘There isn’t a bookseller in the world that doesn’t sell stuff that isn’t books.’ He leans in. ‘Booksellers have it really tough in this country. I think we’re in the worst position in the world. We have Amazon, Kindle and fierce price competition with supermarkets and we don’t have any of the protection that booksellers have in the US and Europe. And we pay huge taxes through business rates. I’m in the tax brigade. We have responsibilities to the society in which we live and one is paying tax.’ Unlike Amazon… ‘And many other multinationals who do everything they can to avoid it.’ Amazon’s controversial Luxembourg registration, which entails five per cent tax or less, is coming to an end next year. ‘It’s already achieved its purpose, which was for them to achieve market dominance,’ Daunt shrugs. He’s too busy to lobby. He’s hoping to get Waterstones back into airports when BAA’s contract is up for tender.