You are here: Home / Archives for Waterstone 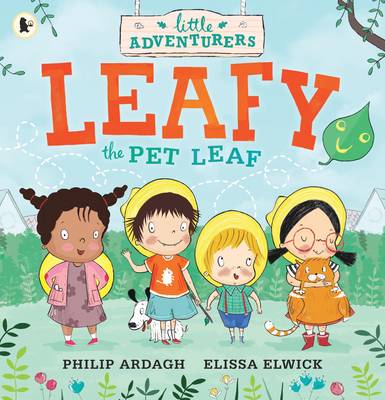 As the photos show [see gallery below], Elwick’s longtime studio mate Sarah McIntyre was (as always) suitably attired for the occasion.

Published by Walker Books, the series stars Finnegan, Sprat, Floss and Peanut who meet weekly in a top-secret shed HQ. In the first title Sprat can’t seem to find his cat, Shadow, anywhere. And he absolutely has to have a pet – it’s bring in a pet day! Instead, he finds a leaf, draws a little face on it and…Ta-Da! Sprat has a pet: Leafy! But can you really have a leaf as a pet? There will be an activity idea and information page with every story in the series, aimed at encouraging immersive play.

As part of the book’s promotion, Ardagh & Elwick have been on the road giving highly interactive presentations to groups of participating young children.

From an event in Birmingham [photograph from a public posting on Philip Ardagh’s Facebook page]: 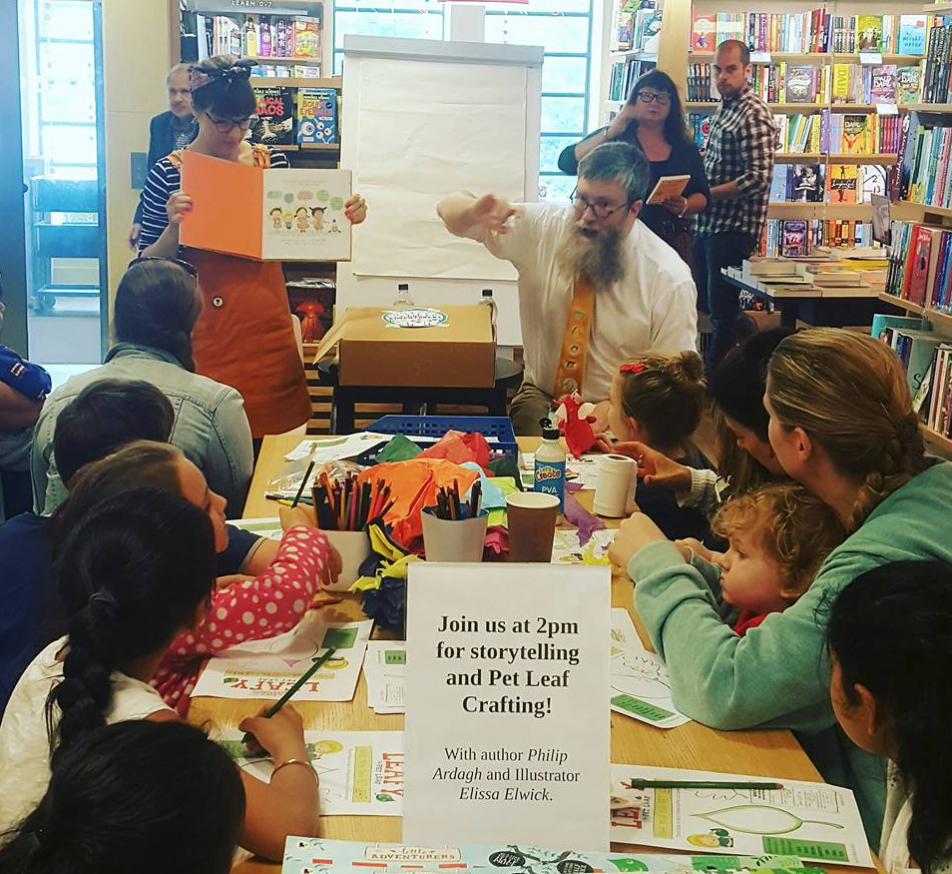 as reported by John Harris in The Guardian (worth reading in full):

[Tim Waterstone] is also about to return to bookselling as non-executive chairman of a new venture called Read Petite. This will be launched to the trade at next week’s London Book Fair, and to the public in the autumn. An online outlet for short-form ebooks (fiction and non-fiction), its users will pay a monthly subscription – “a few pounds” – and have unlimited access to texts of around 9,000 words or under.

But this is no literary Spotify, offering hundreds of thousands of items with little quality control: Waterstone is insistent the service will be “curated” to ensure a high standard. Authors will have appeared in traditional print, and have been brought to Read Petite by a publisher. “The individual short story, or whatever it is, may not have been published, but the author will be an established, published writer,” he says, drumming his fingers on the table to emphasis those last three words. “The whole point is to avoid a slush-pile of material. What we’ll guarantee is quality writing.”

Read Petite’s name was inspired by Reet Petite, Jackie Wilson’s 1957 rhythm and blues classic. One of its key players, former Bookseller editor Neill Denny, has come along to further explain what it is all about. The pair are particularly excited about the chance to serialise new fiction à la Charles Dickens, reintroducing readers to the long-forgotten art of the cliffhanger. They enthuse about how e-readers seem to have increased people’s appetite for short-form writing. In the US, the New York Times has reported on a resurgence of the short story, benefiting new and established writers. We talk about such short-story masters as Somerset Maugham, Stephen King and Annie Proulx, and why the publishing industry has never quite managed to market the form.

“A lot of the best short fiction has never been properly exposed, because publishers don’t find it commercially comfortable,” says Waterstone. His bookselling business did have success with Graham Greene’s short stories, but such successes were rare. “Even with a collection, how do you package it? It’s difficult in print: traditionally, money was used up on production and distribution, and not enough was left for promotion. In the digital world, production costs are virtually nil, and distribution costs don’t exist, so you’re left with a much cleaner sheet.”