You are here: Home / Archives for translation

Papadopoulos Publishing is to set up an imprint in the UK to publish children’s books.

Faros Books will launch in February and plans to publish 10 titles in the first year, building to 15-20 books in 2024.

“The decision to become English language publishers in the first place came after we realised that many of our Greek language picture books were being translated (and published successfully) in other languages, but too few among them in English,” the publisher’s MD told The Bookseller. “English language books output is so huge that very seldom do publishers there seek to translate books (especially children’s’) from other languages. Thus we took the task upon ourselves!” Recommended in The Guardian roundup 27 October 2018

Translated from the German by Sally-Ann Spencer. “Pitzorno, one of Italy’s most garlanded children’s authors, is also known as ‘the Italian Roald Dahl’.” Nicolette Jones Originally published as Kleine wise wolf in 2017, we should be grateful to Book Island and their chosen translator for bringing the book so quickly to an English language audience.

It is a story about a little wolf, who slowly realises he may not be as wise as he thinks he is, and that the world is much bigger than that contained within his books.

Little Wise Wolf has time for only one thing: reading books. All right, two things: at night he studies the stars. When the other animals come to him to get answers to their difficult questions, Little Wise Wolf has no time for that. Until one day, a raven appears. The king turns out to be seriously ill, and Little Wise Wolf is called on to use his knowledge to make him better again. On the way to the palace it turns out that, although Little Wise Wolf may know a lot about the things he has read in his books, and seen in the stars, he has a lot to learn about the outside world. First published 2017 as Emmett et Cambouy, this is a delightful low-key illustrated story about the sharing of small pleasures and routines in everyday life throughout they year. The kind of book that will have unpredictable appeal. Originally published (France 1998) for young adults, Piero traces the lives of two boys through awkward schoolyard encounters, burgeoning sexuality and a lot of drawing.  It’s a bittersweet tale ranking amongst the very best in Baudoin’s powerful oeuvre. Translated into English for the first time. This beautiful bedtime tale is perfect for encouraging sweet dreams and banishing nightmares. The luminous illustrations by much-loved artist Daniela Drescher will make this a new night-time favourite. Eight titles have been selected from nearly 200 submissions from around the world.

The shortlist showcases outstanding books for children age 6-12 picked for their literary merit as well as commercial potential. All shortlisted titles have been partially translated (available to read by viewing the titles below) and World English Language Rights are available to buy. A marketing bursary of £1500 is available from BookTrust to support the UK publication of each of the shortlisted titles.
Three Honour Titles – books that are highly recommended for English translation and publication – will be revealed on 11th April at London Book Fair with Children’s Laureate Lauren Child and former Children’s Laureate Chris Riddell. 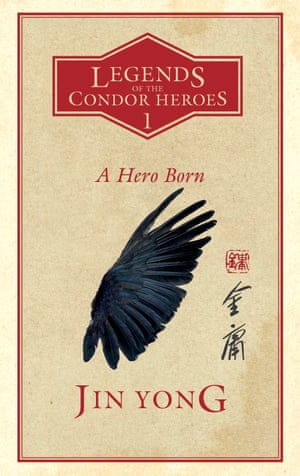 The world’s biggest kung fu fantasy writer, Jin Yong enjoys huge popularity in the Chinese-speaking world. In the west, however, his name is barely known, largely due to the complexity of the world he has created and the puzzle that has posed for translators.

Now, for the first time, the beginning of his extraordinarily popular series, Legends of the Condor Heroes, has been translated into English for a mainstream readership. It is a task that has already defeated several translators, yet Anna Holmwood, 32, from Edinburgh has managed it – or at least the first volume. Her British publisher, MacLehose Press, plans a 12-volume series, with Holmwood’s first volume, A Hero Born, due out in February.

via The Guardian A hero reborn: ‘China’s Tolkien’ aims to conquer western readers | Books | The Guardian. It was a pleasure once again to be invited to Books In Translation at Europe House, the culminating event of The Children’s Bookshow, now in its 15th year.

In the second discussion, which I attended, Sara Dugdale, poet & translator, was in conversation with

This was a delightfully “baggy talk” (Dugdale’s own description) with each of the participants given space to contribute. Ostashevsky, who has lived in America since the age of 10, told us his experience of Soviet literature was as a Soviet child, and that when he was growing up the offerings were old-fashioned and traditional. He remembered versions of Don Quixote and (this surprised the audience) Rabelais. These he conceded were recreations and abridgements rather than true translations.

Alexis Deacon, unsurprisingly, said his taste as a child had already been visual. He particularly enjoyed the French comics Lucky Luke, despite not having a clue what the words said.

Ostashevsky said that in Russia children’s literature has historically provided a source of income for poets and artists unable to sustain themselves by their adult-related endeavours.

Timo Parvela, who painted a gloomy picture of children’s literature in Finland (plummeting sales, an audience more interested in games than books) said that he has been writing for 30 years but that it was only two years ago that his work was first translated into English, for a New Zealand publisher (Bicycling to the Moon Gecko Press).

The Children’s Bookshow, headed up by Sian Williams, is an organisation that arranges an annual tour of children’s authors and illustrators. The tour takes place in the autumn and coincides with Children’s Book Week. It is funded by Arts Council England and private trusts, including the Unwin Charitable Trust.

Niolette Jones, speaking after the talk sessions, told those assembled the good news that the Bookshow has received Arts Council funding for a further four years.

The aim of The Children’s Bookshow is to foster a lifelong love of literature in children by bringing them the best writers and illustrators to inspire and guide them. The first Children’s Bookshow came about as a way of celebrating some of the books and authors that were featured in a book entitled Simply the Best Books for Children, published in 2003 by the Centre for Literacy in Primary Education. The event was such a success that, the following year, a second tour was organised. And now the fifteenth.