You are here: Home / Archives for tie-in 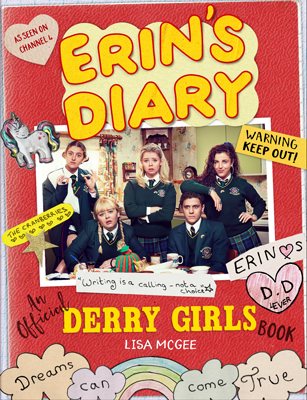 The first official tie-in for the TV comedy series.

In the manner of the very best TV comedy books, Erin’s Diary is a hilarious ‘in world’ publication that extends the laugh-out-loud humour of Derry Girls onto the page. With Erin’s inner take on everything that has happened so far, this book will both dive deeper into the events we have seen unfold on the screen and unveil brand-new stories and never-before-revealed details about characters. Complete with newspaper clippings, doodles, poetry, school reports, handwritten notes from her friends, and much much more, Erin’s Diary is as warm, funny and brilliantly observed as the TV shows – a must-have for fans this Christmas.

Need proof that media tie-ins drive children’s fiction sales full-throttle? New data to be released at the Nielsen Children’s Book Summit next week will offer ample supporting evidence of this at one of numerous sessions during the daylong conference at the McGraw-Hill Auditorium in Manhattan. A co-production of global consumer information provider Nielsen and Miami-based publishing specialists Bookigee, the summit aims to provide a comprehensive overview of the children’s book landscape for publishers, marketers and content developers looking to understand consumer behavior.

The event, to be held on December 12, will feature presentations from Nielsen researchers and child development specialists, as well as live focus groups with families and teens. Presenters will share insights on how to create compelling content, how to use technology to reach consumers, and how to leverage other forms of entertainment to extend book brands and deepen children’s engagement.

PW received an early glimpse of some of the statistics that Nielsen presenters will disclose during the summit session, focusing on the power of film adaptations to catapult YA novels onto bestseller lists – and keep them there for quite some time. Here are some highlights:

● Every YA novel on a Bookscan-sourced list of the 20 top children’s bestsellers from the fourth quarter of 2011 through the third quarter of 2014 (topped by Veronica Roth’s Divergent and John Green’s The Fault in Our Stars) was backed by a media tie-in.

● Film adaptation of YA novels boost sales of the entire series they fall under: sales figures for Suzanne Collins’s The Hunger Games, Stephenie Meyer’s Twilight, and Roth’s Divergent books all skyrocketed by triple-digit percentages after the release of the movie based on the series’ inaugural installment. In the most dramatic example, sales of the debut novel in Meyers’s series increased by 649% from 2007 to 2008, the year the Twilight film was released.

● Among moviegoers ages 18–35, YA novel adaptations tie (at 43%) with fantasy and action-thriller films as their favorite genre, trailing comedy (at 55%) and action adventure (at 47%), but beating out science fiction (at 40%) and romantic comedy (at 39%).

43% of moviegoers surveyed chose YA adaptations as their favorite genre.

● Even backlist titles can benefit from a movie spinoff, as witnessed by Stephen Chbosky’s The Perks of Being a Wallflower, first published in 1999, which got a monumental sales bump courtesy of its movie spinoff. Released in October 2012, the film boosted annual sales from 88,847 copies in 2011 to 425,933 in 2012, and the book has performed consistently well since then.

The YA Adaptation Fanship study was conducted by Nielsen Content, which provides customized research solutions for film, television and digital clients. It involved two focus groups of YA adaptation fans, whose insights helped build the quantitative phase of the research, a 20-minute online survey of 2,000 YA adaptation moviegoers (70% female and 30% male) between the ages of 12–35. One of the research team’s endeavors was identifying four “fanship” segments within YA adaptation fandom, ranging from casual to ardent followers of the genre, to better target the interests of each group.

Further details and various infograms available via the link: