You are here: Home / Archives for sequel 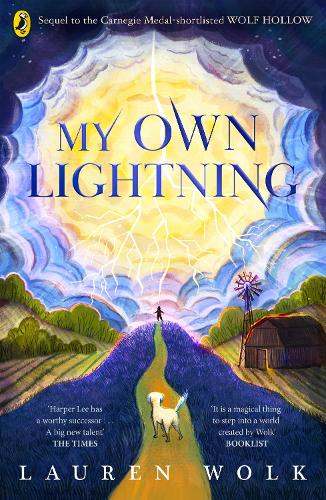 “Deep, dark and indelible.” The Times
“Steeped in themes of growth and acceptance, a solid continuation of an impactful first installment.” KIRKUS
“An exceptional sequel.” Publishers Weekly
“I write without a map. I never know what’s going to happen. I come up with the first line when I’m in the shower, almost always. When I notice patterns, I think, huh, I’ve done this before. There must be a reason why I’m doing it again. Let’s see where it goes. And if it goes somewhere interesting and different enough, I keep on, and if it feels like old hat, I stop and start again somewhere else. I once tried to write a book with a plan, and it was a bore to write. I’m sure it would have been a bore to read if anyone had ever read it. I’m intimidated by some of my writer friends who have a very good idea of where a book is going to end up.” Lauren Walk Talks With Roger

Annabelle, still trying to make sense of her own part in them, is caught in a wild and sudden summer storm – and struck by lightning. She wakes with a memory: a fist, pounding on her heart, bringing her back to life. But there is no sign of whoever saved her, and Annabelle cannot understand who would do such a thing and then flee. To her surprise, Annabelle’s brush with lightning leaves her with a strange and beautiful gift: an uncanny connection with the animals around her, and an ability to understand their deepest fears and feelings. And when several newcomers arrive in her life – as well as a figure from the past – Annabelle must use her heightened senses to discover the truth about them all.

A stunning coming of age novel about forgiveness, friendship and our powerful connection with the natural world. 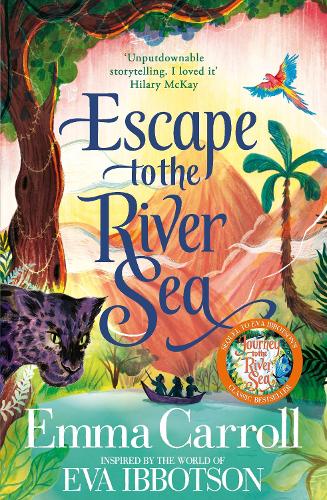 Inspired by Eva Ibbotson’s masterpiece, Journey to the River Sea.

In 1946, Rosa Sweetman, a young Kindertransport girl, is longing for her family to claim her. The war in Europe is over and she is the only child left at Westwood, a rambling country estate in the north of England, where she’d taken refuge seven years earlier. The arrival of a friend of the family, Yara Fielding, starts an adventure that will take Rosa deep into the lush beauty of the Amazon rainforest in search of jaguars, ancient giant sloths and somewhere to belong. What she finds is Yara’s lively, welcoming family on the banks of the river and, together, they face a danger greater than she could ever have imagined.

Featuring places and characters known and loved by fans of Journey to the River Sea (including, among others, Maia, Finn, Miss Minton and Clovis) this  new chapter in the story tells of the next generation and the growing threats to the Amazon rainforest that continue to this day. 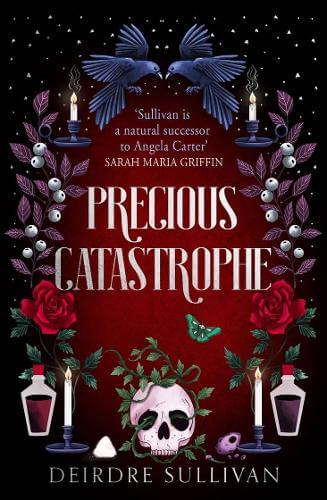 “The writing is atmospheric and creepy, and I was constantly on edge. You just know there’s something sinister happening, even if you don’t know what. It’s the feeling of knowing someone is watching you, they’re behind you, and they’re creeping up to you, but you can’t turn around, so you’re just waiting and waiting for them to reach you. You’re constantly on the precipice of terror; it’s all encompassing and inescapable, and bloody brilliant!” Once Upon A Bookcase
“Precious Catastrophe is a story I had been longing to tell, and I had been gathering inspiration for it for the seven years I’d been writing Perfectly Preventable Deaths, knowing what I wanted to happen, and just waiting for the right time to explore it. I relished the opportunity to return to Madeline and Catlin and explore their world a little more.” Deirdre Sullivan

A compelling and darkly magical sequel to Perfectly Preventable Deaths.

Madeline. You’ve lost your soul. You’ve lost your freedom. You’ve lost a bit of your sister. What else could go wrong? Catlin and Madeline are extraordinary sisters, living extraordinary lives – in a place that seems entirely ordinary, but which in fact seethes with secrets, both sacred and sinister. Ballyfran is a village where, for centuries, people who are not quite human have gathered. Catlin has already fallen foul of one such creature – a dark, vicious predator who almost killed her – and only Madeline giving up a part of her own soul was able to bring Catlin back from the brink of death. Now, the girls are making their strange new lives: Catlin, haunted by what happened to her, is isolated and bereft; Madeline is learning ancient magics under the tutelage of local wise woman Mamo. Learning that magic isn’t mindfulness and hats. It’s work – hard work. And Madeline knows she has to keep watch. On her sister. On the things that happen. Notice things before they start to happen. And before long, they do …

Read an interview with the author on ReadingZone. 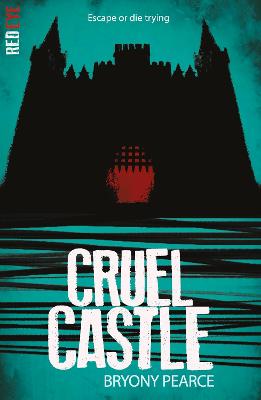 A RED EYE horror novel for teens, this gripping sequel to SAVAGE ISLAND is full of fast-paced action and gruesome twists and turns.

Having survived the horrors of Savage Island, Grady is now stuck working for Gold, the psychopath who masterminded the gruesome competition. Sent on a “team-building exercise” in a remote castle, he starts to plot his escape.
Ben and Lizzie are in hiding, presumed dead after escaping the island. If they’re ever to return to their families, they need to bring Gold down. So they secretly join Grady in the castle. But as the doors slam shut and the series of deadly challenges between them and freedom are revealed, it looks like history is going to repeat itself… 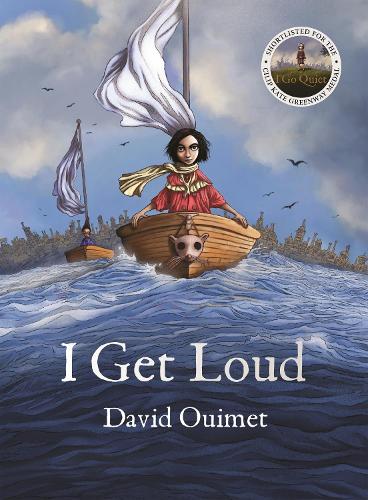 “The language is poetic while the illustrations are darkly gorgeous, with muted hues and lifework as blocky as a woodcut… Like its predecessor, [the book] offers balm to the introverted and anyone unsure of their place in the world.” FT
“Illustrations range from a dramatic fish-eye effect to sharp, diagonal lines and dramatic weather changes that fill the page. Joining earth tones with deep jeweled hues of purple and blue, the artwork recalls aspects of Chris Van Allsburg and Shaun Tan; in fact, Tan’s The Arrival (2007) seems an apt pairing. Two spreads of small, black-and-white panels offer a graphic-novel approach to the telling of the grimmer moments in this unusual story. Visually compelling.” KIRKUS

I Get Loud, the follow-up to  I Go Quiet, sees the introverted heroine go out into the world as she gains confidence in her voice and makes a friend for the first time.

It is a tale of the emboldening nature of the imagination, the redemptive power of friendship and why we should all embrace our own beautiful, singular weirdness.

In the studio, working on I Go Quiet: 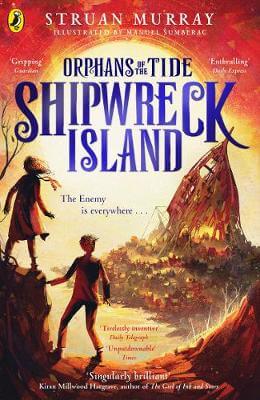 Sequel to the Branford Boase Award winning Orphans of the Tide.

Orphans Ellie and Seth have crossed an endless ocean in search of freedom and peace. Arriving on the shores of a colourful tropical island ruled by a mysterious queen, it seems they might just have found the perfect new home.  But there is trouble brewing in paradise and soon Ellie and Seth find themselves caught up in a dangerous struggle for power – and forced to confront terrible truths from their past . . . 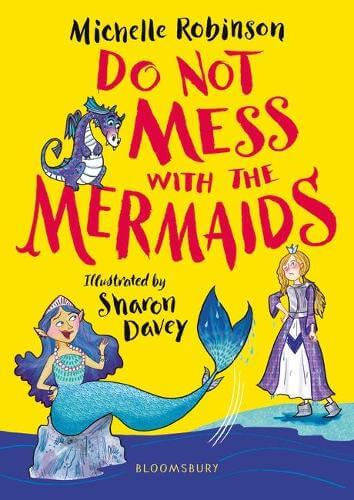 Sequel to Michelle Robinson’s debut young fiction novel, Do Not Disturb the Dragons.

Grace has proved to the kingdom of Wondermere that when it comes to courage, determination, playing TROLL-O on unicorn-back and being a BRAVE KNIGHT, she’s just as good as any boy! But now Wondermere is expecting a VERY IMPORTANT visitor: the MERMAID QUEEN of the Outer Ocean. That means frilly dresses and best behaviour – and absolutely NO RULE BREAKING. But when a purple DRAGON EGG falls into the moat of Wondermere castle, Grace and her sister Princess Portia find themselves babysitting a BIG SECRET. One teeny tiny little dragon called Dennis couldn’t possibly disturb the royal visit … could he? 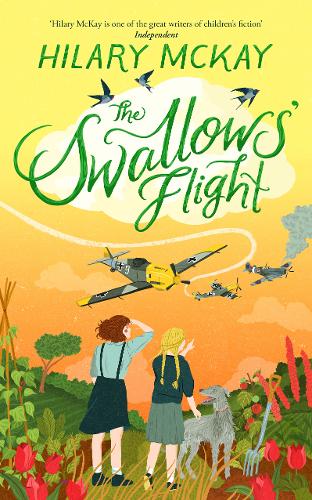 Macmillan Children’s Books has just announced The Swallows’ Flight – the eagerly anticipated companion to Hilary McKay’s bestselling WWI novel, The Skylarks’ War. The Swallow’s Flight will publish in hardback on 27th May 2021. UK and Commonwealth rights were acquired from Molly Ker Hawn at the Bent Agency.

The Swallows’ Flight is a moving WWII story of family and friendship set on opposite sides of a devastating conflict.

Four ordinary lives connected by extraordinary circumstances, Hilary McKay’s stunning companion novel to the Costa Award-winning The Skylarks’ War features the next generation of characters as they move from childhood to the threshold of adulthood amid the chaos and conflict of the Second World War.

Erik and Hans admire swallows over the rooftops of Berlin, little thinking that one day they will be flying above England, risking their lives in a war they both detest. Ruby and Kate, great friends despite their differences, find themselves racing towards a danger that neither of them could possibly have imagined. Meanwhile Rupert and Clarry work secretly for peace – and a brighter future for them all . . .

Samantha Smith, Publisher, Publisher, Fiction, Non-Fiction and Picture Books, comments, ‘I couldn’t be more delighted to introduce Hilary’s new novel, which reunites us with many of the characters we fell in love with in The Skylarks’ War. This is a story of such hope, just the story we all need as we head towards summer 2021.’

The author talking about The Skylarks’ War


will be ‘You Have To Fucking Eat’

Looking to the future, Mansbach remarked on his forthcoming sequel: "There’s been plenty of enthusiasm for a sequel over the years (and plenty of suggestions!) but I always said I’d only do one if it rang true to me—if I felt like I could imbue it with the same kind of honesty, love, and frustration as the first book. And eating is the other universal source of parental anxiety, a battle of wills just as pitched as sleep can be. From my own experiences and plenty of conversations with other parents, it seemed like a topic folks could use a laugh and a bit of catharsis about."
Related Articles
How to draw Rattus by Martin Brown 19 Sep 2014
The 30 best YA books of 2014 24 Sep 2014
James Patterson gives £130,000 to 73 bookshops 25 Sep 2014
How to relieve stress: keep calm and carry on HSBC
You Have to F—— Eat will be published in November in the UK, US and Australia, with illustrations by Owen Brozman.