You are here: Home / Archives for rights

The Bookseller reports that the 10 yr-old independent TV company Komixx, with headquarters in UK and offices in LA and Perth, has once again seen potential in a Wattpad-grown title:

Komixx has secured worldwide rights to Wattpad “sensation” Ali Novak’s My Life with the Walter Boys.

Novak is described as one of online platform Wattpad’s most successful authors and boasts more than 66 million reads worldwide, according to Komixx. The optioning agreement with Komixx was brokered by Alexander Slater of Trident Media Group.

The news follows a number of Wattpad titles optioned by the independent production company, based in the UK, Los Angeles and Australia, including YA thriller Captured by Kelly Anne Blount, revealed last month, and Beth Reekles’ The Kissing Booth, both commissioned by Netflix. Fellow Wattpad hit Taran Matharu signed a six-figure deal for four books with Hodder in 2016 after initially launching his novel on Wattpad.

Originally posted on social publishing platform Wattpad when Novak was 15, the novel was published in print by Sourcebooks in 2014. The blurb describes “prim, proper and always perfect” Jackie Howard as having her world “turned upside down” by a freak accident, after which she starts a new life on a ranch in Colorado with a family of 11 “handsome boys”. My Life with the Walter Boys is billed as a true coming-of-age story about family, loss, acceptance and young love.

A Komixx spokesperson said the optioning “cements [its] reputation as a leading producer of exciting YA TV and film adaptations…as the company adds to its growing portfolio of content optioned from Wattpad”.

Andrew Cole-Bulgin, group chief creative officer and head of film and TV at Komix, told The Bookseller that sourcing titles from Wattpad is a “very attractive element” for the company. 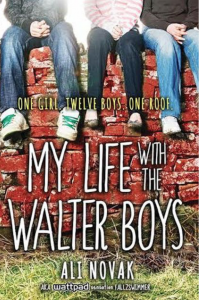 Staggering numbers and unusual circumstances are converging to create a bubbling segment: 370 million children under the age of 18, a two-child policy predicted to add at least three million babies annually, and around 580 publishing companies jumping onto the children’s book bandwagon. Additionally, China’s fast-growing middle class—covering 70% of its urban population or roughly 200 million people based on a McKinsey survey—is exerting its market influence by becoming more demanding, discerning, sophisticated, and vocal.Less statistical but nonetheless critical is the growing awareness—and impetus—among Chinese parents, teachers and policymakers to get children to read more, and to read for leisure as opposed to reading in order to pass their examinations. In fact, China’s 2020 education reform policy is pressurizing schools, teachers and parents to seek more reading, learning, and teaching materials to meet reform objectives, which are to reduce homework and standardized exams and move towards an employment-oriented education system. This has created new opportunities for direct imports, co-publishing deals, bilingual editions, and translations.

via The Booming Rights Scene for Children's Books in China.

Film rights for Caleb Krisp’s children’s debut Anyone But Ivy Pocket (Bloomsbury) have been acquired by Paramount.

Allison Shearmur (producer for “The Hunger Games” and “Cinderella”) will be producing the film, with Michele Mulroney and Kieran Mulroney (Sherlock Holmes: A Game of Shadows), the script writers.

via Six-figure film rights sold for children’s debut | The Bookseller.

Dolphin Films has optioned the rights to the Mary E. Pearson’s dystopian young adult book, The Adoration of Jenna Fox. The production company has also snapped up the rights to the screenplay adaptation, which was inked by screenwriter Garry Williams (Larger Than Life), as well as to the other two novels in the Fox Chronicles trilogy, Fox Inheritance and Fox Forever.

via Dolphin Films brings YA bestseller to the silver screen » Kidscreen.

I had something of a preview of Pam Smy’s Thornhill when I visited David Fickling earlier in the summer… it’s going to be rather special I think..

David Fickling Books (DFB) has secured rights deals with US publishers for Thornhill by Pam Smy and for The Call by Peadar O’Guilin.

Macmillan US offered a “substantial pre-empt” for the North American rights to Thornhill, a story about two girls told using illustration and text.

Simon Boughton, publisher at Roaring Book Press (an imprint of the Macmillan Children’s Publishing Group) said that Thornhill is “a remarkable book – the bewitching story of two girls’ lives told in two very different and thoroughly compelling storytelling languages. Pam Smy is a wonderful talent, and we’re thrilled to have the opportunity to publish her in North America”.

The UK publication date has not yet been announced.

DFB also sold the North American rights to The Call to Scholastic US in a two-book deal. The novel is described as a “hard-hitting YA offering set in an alternate, desolate vision of the world” and will be published in the UK in 2016.

Both deals were brokered by DFB rights director Bronwen Bennie.

via DFB signs US deals for Smy and O’Guilin | The Bookseller.

David Fickling Books (DFB) is set to publish the paperback edition of Simon Mason’s highly acclaimed Running Girl. Shortlisted for the 2014 Costa Children’s Book Award, Mason’s debut foray into YA crime writing was described by the judges as ‘unputdownable’.A former imprint of Random House Children’s Books, newly independent DFB – of which Mason is MD – have acquired the rights to the paperback edition of Running Girl from Penguin Random House, with publication scheduled for June 2015.DFB Publisher David Fickling said: “Our focus at DFB is on all of our authors – past, present and future – and, having had the privilege of working with Simon as his editor over many years, it seemed only natural that we might take on the paperback edition of Running Girl.”There is a huge gap in the market for excellent teen crime fiction, making Running Girl, and its sassy teen detective Garvie Smith, a particularly exciting proposition for us. We’ve been thrilled to see the success the book has – quite rightly – already enjoyed, and can’t wait to bring it home to the DFB stable. We’re also eager to find out what’s in store for our teen sleuth as Simon develops the series.”

Simon and Schuster Children’s Books has acquired a new title – The Potion Diaries – from Amy Alward, who is also editorial director at Puffin.

Elv Moody, fiction editorial director, and Jane Griffiths, commissioning editor at S&S, acquired the rights from Juliet Mushens at The Agency Group in what The Bookseller describes as “a six figure pre-emptive deal”.

“It’s been a long time since we’ve seen anything that feels as fresh as this,” said Moody [as quoted in The Bookseller]. “With pulse-pounding thrills, a contest to save a princess (who is much more Kate Middleton than Rapunzel) takes place in a whirlwind of paparazzi and social media – with just a touch of perfect romantic chemistry.”

The book, described as “a clean teen title for readers aged 11 plus”, will be published in paperback in summer 2015.

Sarah Pakenham is expanding her role at children’s publisher Andersen Press after being appointed director of rights, digital and international sales.

Pakenham has held the role of rights director for more than 15 years at the company but from now on will also oversee the development of Andersen’s digital content.

via Pakenham expands role at Andersen | The Bookseller.

Pullman, very clearly and succinctly, describes the basis of copyright, from an author’s point of view…

If I write a book, the right to make money from it belongs to me, and I make an agreement with a publisher who will print it and distribute it, collect the money it sells for, and pass on a small proportion to me. Anyone who wants to read it either has to buy it, in which case I get that small proportion of the money it sells for, or borrow it from a library, in which case the librarian counts the number of times that title is borrowed, passes on the details to the Public Lending Right administrators, and I’m paid a small sum for each borrowing.

Quite a number of people make money in the course of these processes. The editor, the jacket designer, the publicist, the printer, the library assistant, the bookshop manager, the PLR administrator, and others, all earn a living on the back of the fact that I and my fellow authors have written books that people want to read. And so do I, and that’s as it should be: we all contribute to the process of bringing my book to the public. Our rewards vary, of course: if my book sells a lot of copies I might make more money in a year than the bookshop manager, whereas if it sells very few I’ll make a great deal less. But that’s the risk I take, and on the whole this system is fair, and most authors see the justice of it.