You are here: Home / Archives for review

While some sea stories are mainly good for a pirate-y thrill, others take young readers a bit deeper. The vast scope and power of the high seas makes the world’s oceans a dramatic setting for stories for those just getting their sea-legs as thoughtful, feeling, capable humans. Four new picture books leave dry land behind to reflect on the rewards and perils of friendship, empathy, courage and more…

The 4 titles reviewed by Marcus are

from ghoulish goodies to clear-sighted feminine analysis, in Imogen Russell Willaims’ latest roundup for The Guardian:

…more clear-sighted feminist analysis (and many more belly laughs) in Holly Bourne’s latest young adult novel, It Only Happens in the Movies (Usborne). Audrey, weathering the aftermath of a big break-up, declares war on the cliches of romantic comedy while simultaneously trying to hold notorious charmer Harry at arm’s length. It doesn’t help, however, that they are co-workers at an indie cinema, or that film-mad Harry is attempting to shoot his first zombie feature. Boasting emotional depth and believable heartbreak alongside such memorable lines as “frostbite of the bumhole”, this is Bourne at her outrageous, courageous, necessary best.

Pullman himself is a woodworker, artist and calligrapher; his tradecraft aligns him with another important strand in the sensibility of Victorian Oxford and American transcendentalism: the independent-minded, visionary Henry David Thoreaubuilding his cabin, William Morris with his ideals of beautiful handmade things, and John Ruskin, who shared those dreams. Pullman has come to resemble the Ancient Mariner, shaking hoary locks, demanding we pay attention to the calamities gathering on all sides. The radiant devices and other wishful dreams of alternative futures have rather faded from view in this new book, and the child heroes are beleaguered and alone in their valiant struggle against huge, massed forces of harm.

The tension in Pullman between deep attraction to magic and fierce atheistic pragmatism resolves itself into a commitment to art – especially shipshapeliness; this is a properly Romantic attitude. Just as his concept of daemons owes a lot to Coleridge’s ideas about inspiration, and his absolute trust in imagination rings with the hopes and beliefs of Keats and Shelley, so the commitment to the making of things as well as possible in the here and now expresses his faith that a well-made story, like the small, well-trimmed boat that carries the children on their long, dangerous journey, will offer shelter in any storm.

Pullman’s imagination is so enticing that any new window into it is welcome; and to connect once more with a fictional universe of such great power is a delight. Though La Belle Sauvage does not quite attain the fiery, magnificent heights of its predecessors, I’m certainly eager for the next two parts of this new trilogy; there are, after all, many more worlds to conquer. 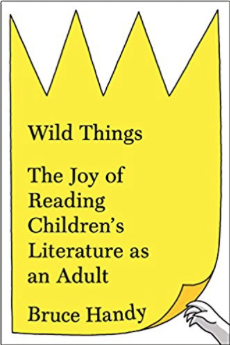 In “Wild Things: The Joy of Reading Children’s Literature as an Adult,” Bruce Handy does as his title promises, proceeding through children’s literature like someone determined to cook every Julia Child recipe. But since, of course, the number of children’s books out there far exceeds the number of Child’s soufflé and marbled steak dishes, Handy selects a few titles to represent each age, from babydom on up to whatever it is children become before they become us. Some of these are from his own childhood, some are books he read to his (still growing) children, and some seem chosen to answer a curiosity about what so-called girl books really are. This not-quite-method leaves the book occasionally feeling dutiful — but mostly not. “Wild Things” doesn’t have much of an argument to make other than its premise that we should take children’s literature seriously, which I think many people already do, and yet the book succeeds wonderfully, not so much as an argument but as an eccentric essay, and an emanation of spirit.

The trivia alone offers quite a bit of joy. Maurice Sendak altered his original plan for “Where the Wild Horses Are” because he lacked proficiency in equine anatomy. Also: L. Frank Baum’s first publication was a guide to breeding Hamburg chickens. Margaret Wise Brown of “Goodnight Moon” fame gave just one piece of visual instruction to her illustrator, Clement Hurd — a photograph of Goya’s “Red Boy.” And Theodor Geisel (a.k.a. Dr. Seuss) not only worked on the screenplay for “Rebel Without a Cause,” but also tried, early on, to make his fortune with an invention called the Infantograph — a machine that used images of prospective parents to predict what their offspring would look like.

full review via A Grown-Up’s Travels Down the Rabbit Hole of Children’s Literature – The New York Times.

For readers who like a frisson of fear, Pam Smy’s ominous, hefty hardback, Thornhill (David Fickling), is a rule-breaker in the vein of Brian Selznick’s The Invention of Hugo Cabret – a skin-crawling story of a derelict house haunted by past cruelties, told almost entirely via illustration, with some help from found texts and tattered ancient diaries. Smy’s intense chiaroscuro, delicately drawn handmade dolls and spare, evocative detail, with pure black pages marking the division of days, combine to create an unsettling, deeply memorable read.

Imogen Russell Williams had some recommendations in Saturdsy’s Guardian review…

For 12+, there’s The State of Grace (Macmillan), another debut, from Rachael Lucas. Diagnosed as autistic herself, Lucas has created a wry, engaging autistic protagonist in her titular heroine. Overstimulation and mockery make school challenging for Grace, and her parents’ relationship has hit a rocky patch; but with the help of her best friend, her beloved horse and her own determination, she might just get through The Big Party (and talk to gorgeous Gabe Kowalski into the bargain). This honest, romantic, hilarious novel feels long overdue.

Everything Beautiful Is Not Ruined (Scholastic), meanwhile, is an elegant, humorous tearjerker from Canada’s Danielle Younge-Ullman. Ingrid has been inveigled on to a hardcore wilderness exploration programme by her mother; blighted by the end of her opera career, Margot-Sophia is determined to instil resilience in her daughter. In letters full of sarcasm, affection and self-revelation, Ingrid tracks her progress through the past and present, learning to face and shape her own future in the process.

Jenny McLachlan, author of the amusing Ladybirds series, is on stellar form with Stargazing for Beginners (Bloomsbury), a standalone novel about super-intelligent, shy, space-mad Meg. Working desperately to win a trip to mission control at Houston, Meg doesn’t expect her free-spirited mother to jet off to Myanmar, leaving her in charge of Elsa, her determined, none-too-fragrant baby sister, with only Grandad, with his cavalier attitudes and ever-growing hamster farm, as back-up. Funny and moving, this book is a treat.

This breakneck palaeontological western is perhaps best not judged by its cover. A jigsaw dinosaur skeleton seems to welcome younger readers, despite the tagline’s warning that “Love lies buried”; this makes the appearance of sexual attraction (“I felt myself stiffening between my legs”)on page nine slightly disconcerting. But for a reader mature enough to handle the pungent, realistic detail of 19th-century life, it’s a fascinating, fast-paced, rich and provocative novel.

via Every Hidden Thing by Kenneth Oppel review – heat, dust and dinosaur bones | Books | The Guardian.

CILIP, the library and information association, has announced plans to include an independently chaired review of the CILIP Carnegie and Kate Greenaway Medals as part of the organisation’s wider Equality and Diversity Action Plan.

CILIP is due to publish its Equality and Diversity Action Plan, led by the CILIP Ethics Committee and the Board of Trustees, in the summer of 2017. The Plan is as a result of on-going work, following previously published research commissioned in 2015 by CILIP and the Archives and Records Association, which outlined diversity issues in the library, archives, records, information management and knowledge management sector, including a gender split in the workforce of 78.1% female to 21.9% male (UK workforce 50.1% female and 49.9% male) and that 96.7% of the workforce identify as ‘white’ (UK workforce 87.5% identify as ‘white’).

CILIP’s Action Plan will identify steps in both the short and long-term to improve and champion equality and diversity within CILIP, its governance, membership and the wider library and information sector. It will now include details of the review process for the Medals.

Nick Poole, CILIP Chief Executive, says, “We are committed to championing diversity, equality and inclusion through all of CILIP’s activities, from the Carnegie and Kate Greenaway Medals to the wider library and information sector, while also confronting and challenging structures of inequality. We know there are long-standing and embedded challenges and we see this as a tremendous opportunity to promote positive change for ourselves and the sector. For this reason, we are announcing the publication of our Equality and Diversity Action Plan and an independently chaired review into the CILIP Carnegie and Kate Greenaway Medals.”

The decision to hold an independently chaired review of the CILIP Carnegie and Kate Greenaway Medals was taken by CILIP and the Working Party who plan and develop the Medals, following concerns raised about the lack of BAME representation on the 2017 Carnegie Medal longlist announced in February. The review will inform the annual evaluation process and long-term planning around the Medals and accompanying shadowing scheme. The review process – which will provide recommendations about how diversity, equality and inclusion can best be championed and embedded into its work – will be open, transparent and accountable and will proactively seek views and contributions from the widest possible range of stakeholders. The review will begin following the announcement of the 2017 winners in June and follow the 2018 prize cycle.

Tricia Adams, Chair of the Youth Libraries Group National Committee and Chair of the CILIP Carnegie and Kate Greenaway Awards judging panel, commented: “We are completely committed, as Medals judges and librarians, to championing diversity, equality and inclusion and challenging issues of structural inequality in a positive and constructive way.”