You are here: Home / Archives for popular

from an interview in

Do you count yourself a history buff?

Absolutely not. I have to read history books now to research my novels and new Horrible Histories but I’m not a historian and some of the things historians write, I find hard to swallow. These people are out to sell books and I’m starting to spot the distortions and the way they twist facts and make assumptions so I don’t really like historians at all and if anybody called me one, I’d probably set fire to their house!

via Terry Deary: ‘I don’t really like historians’ – WhatsOnStage.com.

Horowitz, who is also the principal writer on the ITV period detective drama Foyle’s War, singled out Gangsta Granny, with its breaking-wind jokes and a character who perpetuates the myth that children ‘automatically dislike reading’.
Writing in the Times Educational Supplement, he said he was troubled that children’s books ‘seem to have come full circle’… …

‘To some extent, narrative fiction was reinvented by JK Rowling – it’s hard to believe that children weren’t challenged by books that stretched to 760 pages – and a phalanx of writers crested on her success: Michael Morpurgo, Philip Pullman, Jacqueline Wilson, Malorie Blackman, Eoin Colfer, Darren Shan… and me. ‘Today it is Jeff Kinney and David Walliams who top the bestseller lists, with books that are witty and entertaining but nowhere near as ambitious.’He added: ‘Speaking personally, I was a little sad when, in Walliams’ Gangsta Granny, we were told that among the old woman’s vices, which included dribbling and farting: “Her house was stuffed full of books and she was always trying to get Ben to read them, even though he loathed reading”.’ Horowitz said ‘the idea that children automatically dislike reading or that books belong to a more fusty, ancient generation is patently absurd’.His Alex Rider books, the first of which was published in 2000, have been ‘brightly re-jacketed’, and are ‘as popular as ever’. Of the hundreds of millions of photographs you’ll find on Flickr, these 25 photographs were found to be the “top” images based on a number of “engagement and community” factors, including how many times they’ve been viewed and added as a favorite image. #24: “And when it all comes crashing down, who will you be?” by Chris Hieronimus #23: “The Backyard Falcon” by Vesa Lehtimäki #18: “on the neighbour’s grounds” by Rosie Anne #17: “I will learn to love the skies I’m under.” by David Uzochukwu #16: “Such is the price of leaving” by Whitney Justesen #9: “Besides my dad, she was the only one in my family who was like this…” by Brandon Stanton #4: “Wherever you lay your head” by Rosie Hardy Most read authors for all children between years 1 and 11

While sales for Suzanne Collins’s Hunger Games trilogy (Scholastic) and John Green’s The Fault in Our Stars (Dutton) may have dropped off at many stores from last summer’s highs, Rachel Renée Russell’s Dork Diaries series is still going strong, with number six, Tales from a Not-So-Happy Heartbreaker (S&S/Aladdin), topping many bookstores’ kids list.

Other children’s books and series with staying power include R.J. Palacio’s Wonder (Knopf), published a year and a half ago, and Pete the Cat (HarperCollins). “Anything with beach scenes on the front is doing well for us,” says Robin Allen, owner of Forever Books in St. Joseph, Mich., whose customers are grabbing Pete the Cat: Pete at the Beach and Pete the Cat: Play Ball!, both created by James Dean. Sarah Dessen’s name also popped up on bestseller lists at a number of stores, like Hooray for Books!, which has been doing particularly well with her new novel, The Moon and More (Viking).

via Children’s Booksellers Dork Out and Catch the Wave This Summer: A PW Survey. 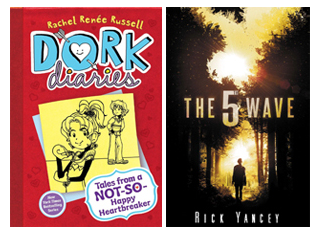