You are here: Home / Archives for Penguin 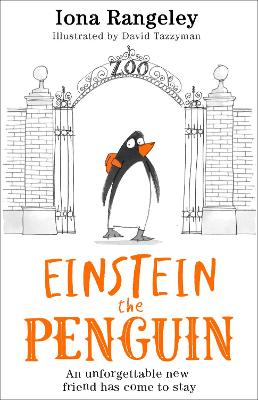 When the Stewarts spend a sunny, frosty December day at London Zoo, they’re enchanted by one small penguin. At the delight of young Imogen and Arthur, Mrs Stewart insists the penguin “must come and stay with them whenever he likes.” But not one Stewart expects the penguin to turn up at their door that evening, rucksack labelled “Einstein” on his back…

The family’s new feathered friend helps Arthur to come out of his shell and makes massive demands on Imogen’s amateur sleuthing. But together they must find out why Einstein came to them and they must keep away from the mysterious white-coat man. And Einstein can’t stay forever, can he…? 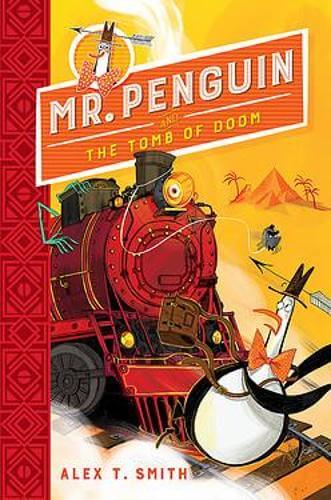 Follow Mr Penguin and his trusty sidekick Colin (the spider) as they head into the desert! When their good friend Edith is kidnapped, they’re on their most important mission yet. Can they survive a perilous train journey to the great pyramids? Will Mr Penguin complete the three impossible tasks – and get home in time for a fish finger sandwich …?

Find out in the fourth Mr Penguin book with plenty of slapstick humour, mystery and adventure.

A new cover design for the 50th anniversary of Charlie and the Chocolate Factory has had a rough reception.
The cover photograph, which many of those quoted in this Daily Mail piece take exception to, was taken from a French magazine fashion shoot by the photographers Sofia Sanchez and Mauro Mongiello, entitled Mommie Dearest. Penguin said the girl in the cover photograph was not intended to be either Violet Beauregarde or Veruca Salt, the spoilt young girls who feature in Dahl’s tale, but a representation of the ‘twisted’ parent-child relationships depicted throughout the book.

Today, as part of its new “brand system,” the international mega-publisher revealed its new corporate wordmark, which is a much more elegant and understated design than those floating around the Internet. The logo, designed in a Courier-style font called Shift, will most often be paired with logos for the publisher’s various 250 brands and imprints.

Hall-Craggs departs today (13th May) after 15 years at Random House, where she led a team of seven publicists. During her time at the company she has worked with authors including Jacqueline Wilson, Terry Pratchett, Shirley Hughes, Simon Mayo and Beth Reekles.

Apparently last month staff at Random House Children’s Publishers were told that up to 18 roles were at risk of redundancy.

via Hall-Craggs leaves RHCP | The Bookseller.

Expect a flood of media attention to the publication of Half Bad by Sally Green. Here’s just a sample, from yesterday’s Times:

The buzz around first novelist Sally Green is drawing comparisons with Harry Potter, the Hunger Games and Twilight
Sally Green spent years in safe professions dreaming of writing a bestselling novel. Not a particularly original plotline. But unlike most paper-pushing fantasists, the mining geologist turned accountant, from Warrington, Cheshire, has achieved her ambition, aged 52. And this is no ordinary book deal.
“Look at me, I’m 52 — I’m 52! I’ll say it positively. And I’m just starting a career in writing,” she says, when we meet.
What a career start. Last year she landed a six-figure, worldwide deal for her trilogy, a young-adult series about witches living in the present day. It promises to make them the new vampires (clearly, it’s all come full circle) — with lashings of dystopia. Publishing rights have been sold in 45 countries. Film rights have been bought by Twenty-First Century Fox — with Karen Rosenfelt, the producer of the Twilight films, attached to the project. Green is now set to earn more than £1 million from her books. Which, all in all, is pretty good for an author who had written little more than a Post-it note before writing her debut. The first book, Half Bad, is out this week and Penguin are rolling out a book a year for the next two years in the sort of trilogy “dumps” that meet the demands of hungry fans.

via Sally Green’s hero is the new witch on the block | The Times. 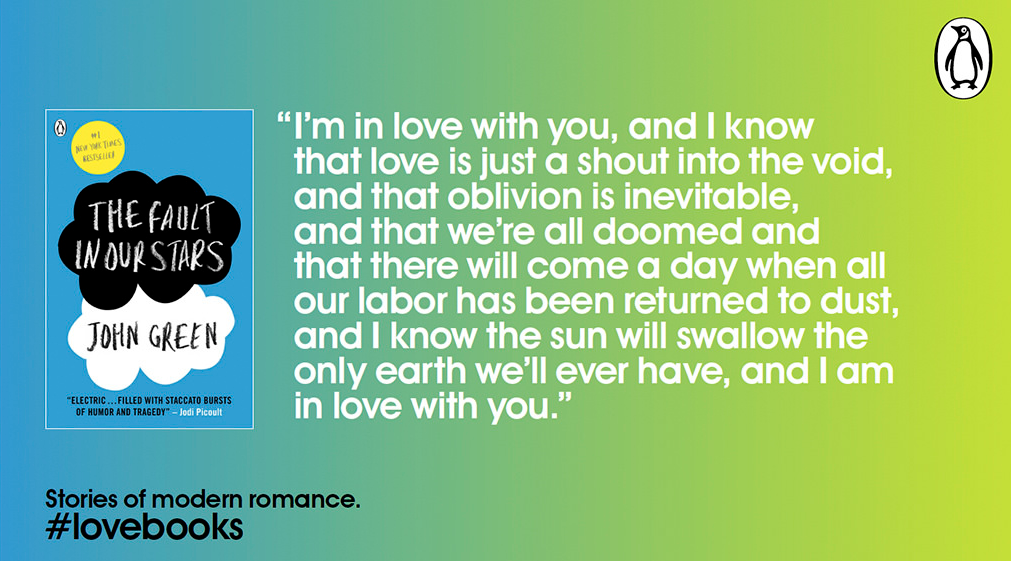 Penguin’s digital Valentine campaign consists of a set of imagery in a variety of formats displaying quotations from assorted Penguin books, and all made available to ‘social media’ to distribute on the publisher’s behalf, which I am obligingly doing.
Rather clever of their marketing team, what?

No flowers. No hearts. No clichés. Cupid’s not invited. These are contemporary tales of modern romance from some of our finest authors – hilarious, troubling, poignant, real, and raw, these books make ideal purchases whether you’re happily betrothed or recently dumped. Look out for some of our favourite quotes from these titles

Penguin Children’s has acquired the UK and Commonwealth rights for a YA contemporary romance about two teenage boys falling in love, entitled Simon Vs the Homo Sapiens Agenda by debut author Becky Albertalli.

via Penguin Children’s buys YA gay love story | The Bookseller.

I attended a lunchtime Penguin Showcase yesterday. There are many good things coming, and several anniversaries to celebrate. The presentation made me wonder about certain things, so here’s a quick summary. Words only I’m afraid. Something about the event made me uneasy about getting out the camera.

Francesca Dow made passing reference to her new role at the helm of an amalgamated Penguin/Random House children’s book publishing conglomerate but moved on quickly, saying there would be another occasion to say more about that. In setting the scene, she emphasised the ongoing role that ‘stories’ have in generating the new world of apps and franchises.

A number of authors and illustrators had been invited to choose the book that had made ‘all the difference’ to them when they were growing up. Julia Donaldson kicked off (on screen, not in person) with The Book of a Thousand Poems, given to her, if I remember correctly, by her dad.

Peppa Pig is 10 years old and has sold 22 million pounds worth of titles. The Hungry Caterpillar is 45 years old. We were shown a video clip of Eric Carle explaining that the caterpillar began life as a worm, and his first draft of the picture book was titled A Week With Willi Worm. He still has the original drawings.

Jacqueline Wilson had selected Ballet Shoes as the book that made all the difference for her.

The big anniversary and celebration this year is the 50th anniversary of Charlie and the Chocolate Factory. Everything is scheduled to kick off officially on 1st February, the date on which Willy Wonka opened the factory gates. But before that, on Jan 30th, various Dahl audiobooks will become available as an iTunes app. [I will try and get more information about this, as it was only touched on yesterday.] And then in September journalist Lucy Mangan publishes a book aimed at adults on The Making of Charlie and the Chocolate Factory, for which she has been given access to the Dahl archive.

There are big things happening merchandise-wise with Topsy & Tim. The creator Jean Adamson surprised Puffin with her choice of book that made the difference. She selected Aesop’s fables, explaining that their smug moral endings prompted her to “rewrite them with immoral endings”, and thus began her career as a writer.

The new Peter Rabbit merchandise looked horrible to me so let’s pass over that without further comment.

An iOS game based on Charlie Higson’s The Enemy will be released in March, developed by Daredevil http://www.daredevil-development.com/games.php

We have to wait till September for the second novel in Rick Yancey’s The 5th Wave series.

In the same month there will be a new book from Lauren Child, who was there to tell us all about it. Called A New Small Person it is about sibling rivalry (notably resentment at the arrival of a new brother or sister). It was interesting, and a surprise to me, that all her picture books start out as a storyline written in plain text. She held up the first draft manuscript of this new book.

The star entertainer of the Showcase was Irish comedian, David O’Doherty, a truly very funny man who, with illustrator and silent double-act stooge, Chris Judge, has written a joke manual, Danger Is Everywhwere: The Notebooks of Docter [sic] Noel Zone, Dangerologist, which is published in August.

O’Doherty’s book that ‘made all the difference’ was the Panini Football Sticker Album 1984.

There are other good things to look forward to. Arguably the biggest YA debut of 2014 in March, when Half Bad by Sally Green is finally out. Read my ACHUKAreview.

Before that, in February, comes book two in Michelle Paver’s Gods and Warriors sequence, (and then Book Three in August). The same month, February, sees the release of The Chocolate Box Girls by Cathy Cassidy, Vampire Academy by Richelle Mead and a World Book Day title from Jill Murphy, Fun With The Worst Witch.

Kicking A Ball is a new rhyming picture book by Allan Ahlberg. It’s out in May, as is the new novel from Phil Earle, The Bubble Wrap Boy and a movie tie-in edition of The Fault In Our Stars by John Green.

Cathy Cassidy fans will be happy in both February and June, when new installments of The Chocolate Box Girls are published.

Where Bear by Sophy Henn is a picture book I’ll look out for in August.

In drawing the showcase to a close, Francesca Dow promised that Penguin/Puffin would “never lose sight of our consumers”. It was a carefully-chosen phrase, and very apt for the presentation, which emphasised throughout the popular appeal and entertainment value of Penguin’s book and merchandising programme.

In the scheme of things there seem to be fewer middlingly popular authors alongside the mega-sellers than there were in the past. I wonder how, for example, an author such as Kevin Brooks, whose The Bunker Diary has just won the Southern Schools Book Award, fits into the scheme of things. His books feel to me to be under-promoted. Even Foyles only had two separate titles by him on their YA shelves when I visited later that afternoon.

Also, for a publisher who is so justifiably proud of its Dahl legacy, (with the exception of Jeremy Strong – although no doubt someone will be able to give me other examples to counter this point) Puffin seems to publish remarkably little home-grown comic fiction for the 7-10 audience of the kind written by Philip Ardagh, for example.

For my review of Half Bad, click the ACHUKAreviews link below…

The YA book you will want to have an opinion about this spring.