You are here: Home / Archives for Non Pratt

Well, Non Pratt, commissioning editor of Catnip Books kept very quiet about her forthcoming novel from Walker when we met earlier this week.

Here Wondrous Reads does a cover-reveal on her blog, showing both the US and the UK cover designs.

And she quotes the synopsis:

When fifteen-year-old Hannah Sheppard discovers she’s pregnant, her life begins to crumble, and the people she thought she could rely on leave her floundering. She finds an unlikely friend in new boy Aaron Tyler, who up until now has avoided getting too close to anyone in case they discover the reason he left his previous school. An intense friendship develops between Hannah and Aaron – but will they ever trust the other enough to reveal the secrets they’re both so desperate to keep hidden? 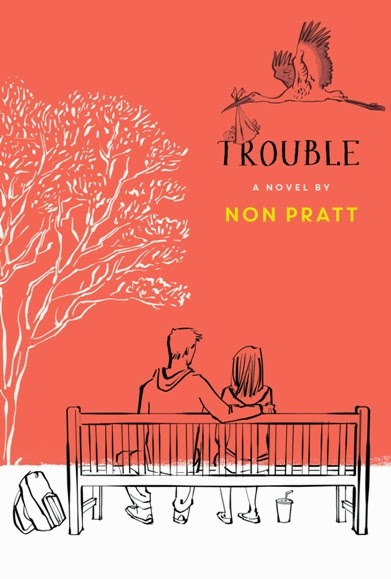 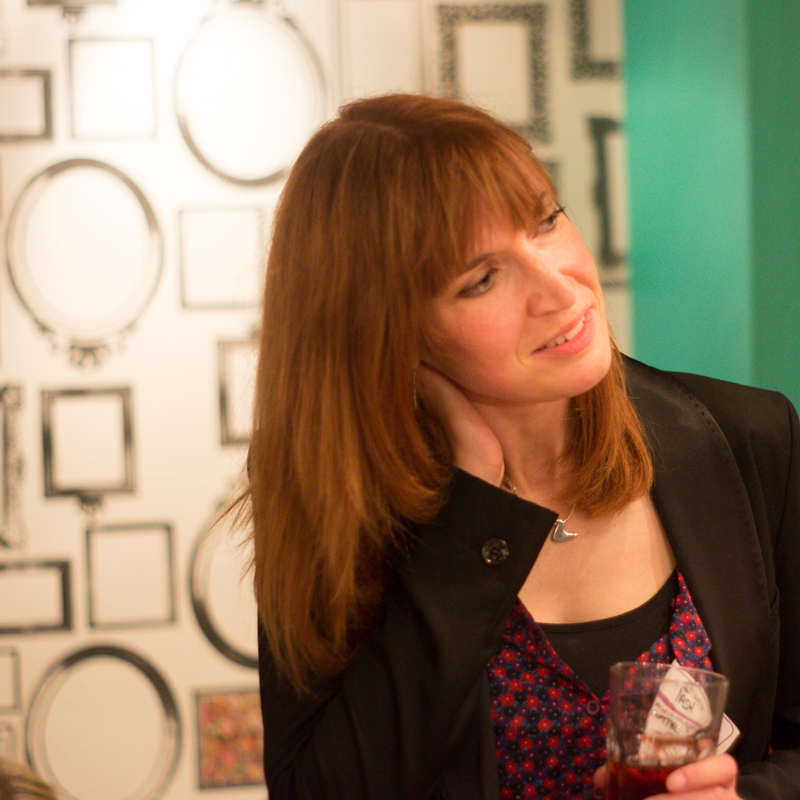 Catnip Publishing is one of the smaller names in the world of UK children’s books (it has no entry in Wikipedia). Nevertheless, they have some notable titles on their list: Victor Watson’s recent, well-regarded wartime novels Paradise Barn and The Deeping Secrets, Dominic Barker’s popular ‘Mickey Sharp’ crime series, as well as books by authors with long-standing reputations such as Lesley (now L. P.) Howarth, Joan Lingard, Berlie Doherty and Robert Westall.

They also have a strong list of Early Readers and Chapter Books, including the new series Roodica Rude by Margaret Ryan.

It’s a small team. Their website names Non Pratt as Editorial (it was a pleasure to meet her for the first time last night) and that’s about it. (She has recently been joined by Liz Bankes.) Sales, marketing and publicity are all handled by Bounce! 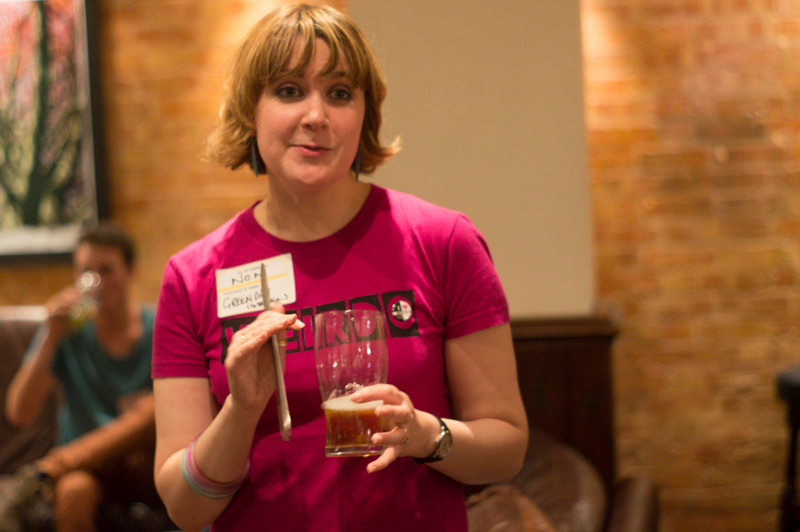 They have a great name and a great curly-tailed logo. 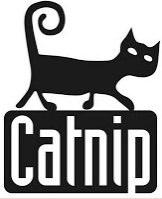 But in my view they underplay these two assets in their window to the world. Inexcusably, their website catnippublishing.co.uk is not properly responsive. The home page, for example on an iPad in portrait mode, overspills the right-hand margin, and other pages simply condense into the same multi-columned format seen on a large screen. 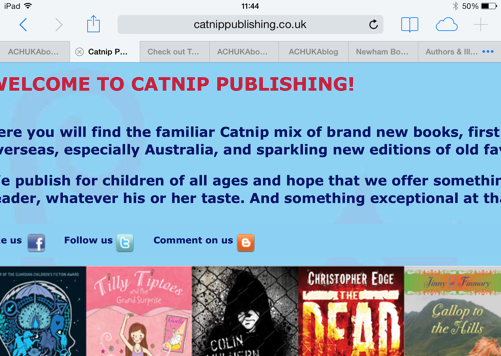 I hope someone is at work to improve things in this department. What’s needed is a complete make-over, because the current mix of muted red with sky-blue does not do it for me. Introducing white space would breathe fresh air into the design. 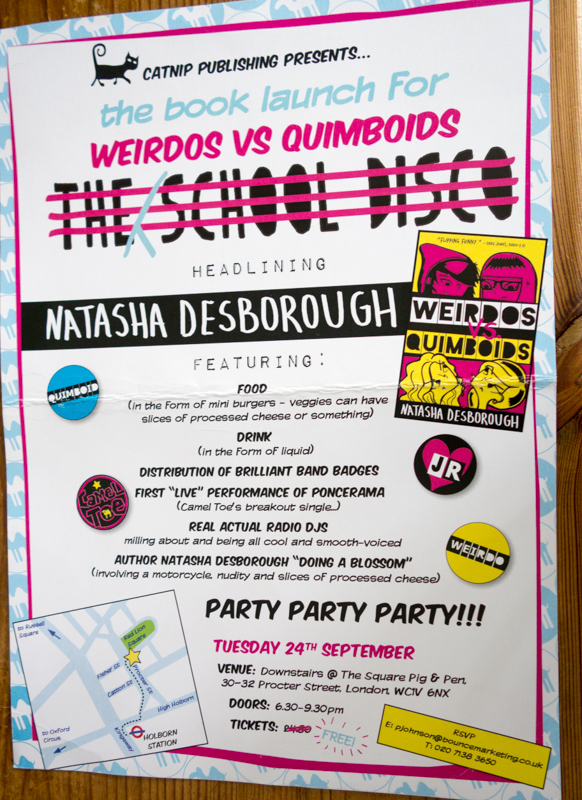 The A4 sized invitation to the launch of Weirdos vs Quimboids by Natasha Desborough was much more lively. Conceived as a spoof poster for a school disco, it shouted excitement. It helped that the venue was almost next-door to where my sister lives. So I put it in the diary, and I’m very pleased I did. 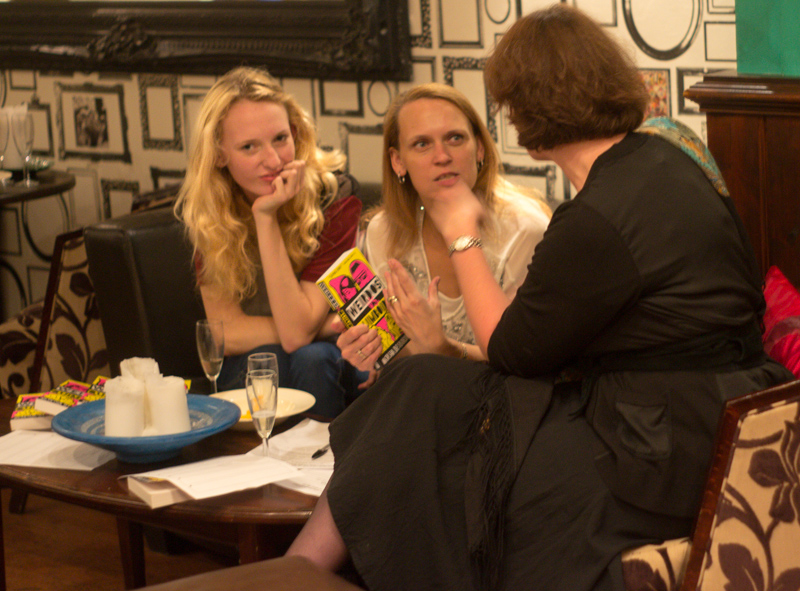 The weather was almost as warm as it had been on my previous London trip (the visit to Newham Bookshop) and before the actual launch party I was able to spend the afternoon browsing in Waterstones, Piccadilly, paying my first visit to Daunt Books (the Marylebone High Street branch), and dropping in on my sister for a cup of tea and a chat.

The Daunt idea of organising books by country certainly makes for interesting browsing. The atmosphere reminded me of what you get inside a French bookshop. A sense of quiet and retreat from the world outside. What struck me for the first time was the importance of a shop’s pay desk or counter when it comes to establishing this bookshop atmosphere. 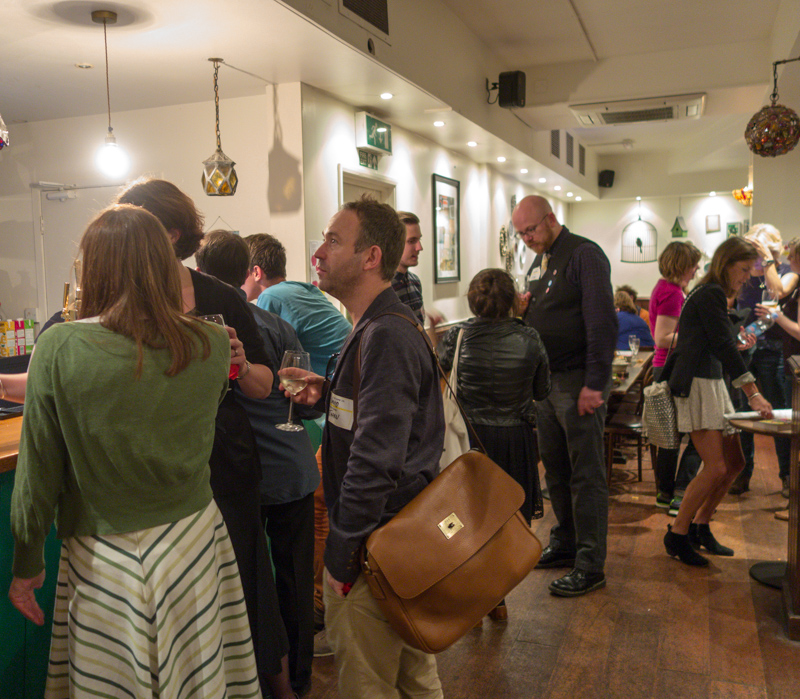 It is too late now, most of the Waterstones refits having already been completed, but what I would have done had I been Daunt is remove those high pay-at-the-till counters that make book-buying an experience not unlike queuing up to buy clothes at Primark, and replace them with a lower-level, more open table/desktop surface.

I don’t know how many people received the party invitation. Those who did but couldn’t manage (or chose not) to attend missed an event that had a distinctive, noteworthy feel to it. 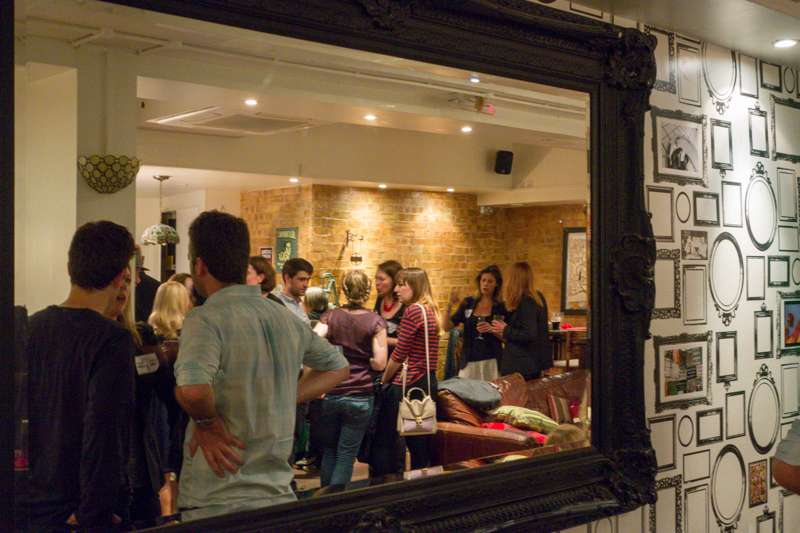 It was held downstairs at The Square Pig & Pen in Holborn, one of those bars that swarm every evening Monday through to Friday with twenty and thirty-somethings enjoying afterwork drinks. Usually at such a launch there will be half a dozen people I recognise, but not this time.

‘Non’ was quick to make me feel welcome, however. She may be Catnip’s commissioning editor (find out more about her job here: http://talltalesandshortstories.blogspot.co.uk/2011/06/interview-with-non-pratt-commissioning.html) but she also has to perform the schmoozing tasks that larger publishers can assign to their PR people. Non is very switched on. Catnip are really fortunate to have her at the helm. 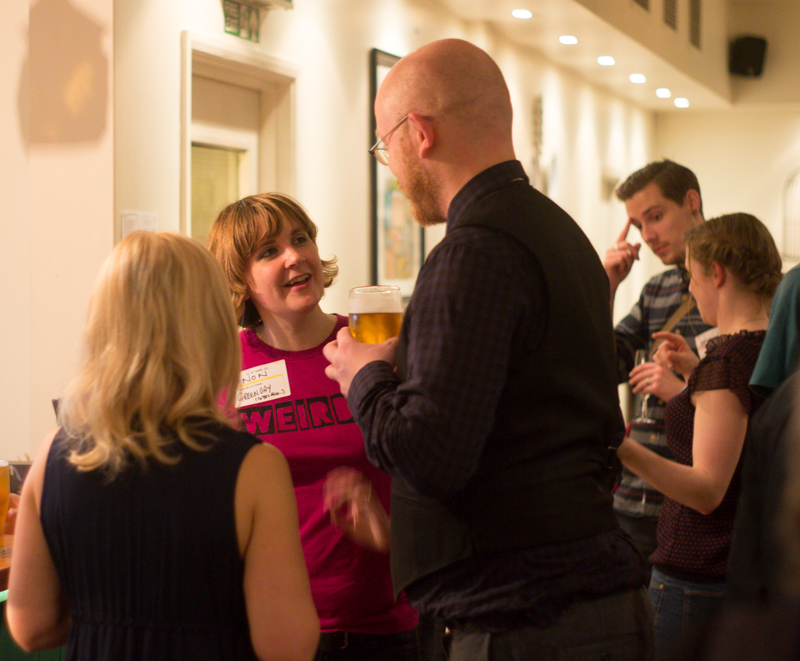 She introduced me to two young bloggers – Bella @CheezyfeetBooks http://www.cheezyfeetbooks.blogspot.co.uk and Rhys @fictionthirst http://www.thirstforfiction.com (both still at school). I was already aware of Bella from her Twitter feed, but Rhys’s site is new to me. He’s a perceptive reviewer, writes really well, and is not afraid to be critical. Definitely worth bookmarking.

I also had a good chat with Latvian Leva from the Bounce team, who left before I could take her photo. She was so enthusiastic and is a big fan of Barry Cunningham (who came up in our conversation by way of Kevin Brooks). Many of the guests were friends and contacts of the author, so that the occasion had the mellow vibe of a private party. 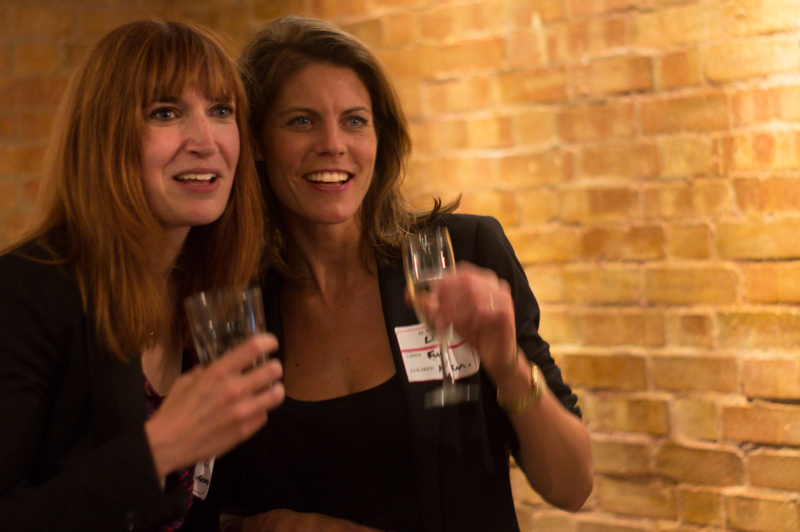 From a promotional point of view I presume both publisher and author would ideally have liked more librarians and booksellers present. However, Matt Imrie of Teen Librarian fame, was there, and managed to write his blog report of the event on the train home. 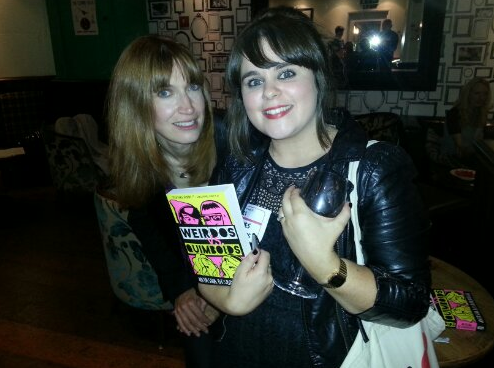 I have taken the liberty of nicking his photo of the author and illustrator. (Hope you don’t mind, Matt.)

So, what of the book?

It’s a YA confessional in the Louise Rennison mould. I liked it. It’s lively and well-paced. Each section ends with an END OF WEEK ACHIEVEMENT TABLE, giving scores for Shame Level, Guitar Practice, School Work, Party Invitations and Snogs. Devices such as these are often used in too arbitrary a way in books of this nature, but here the technique is properly wedded to the narrative structure in a way that helps underline the humour. 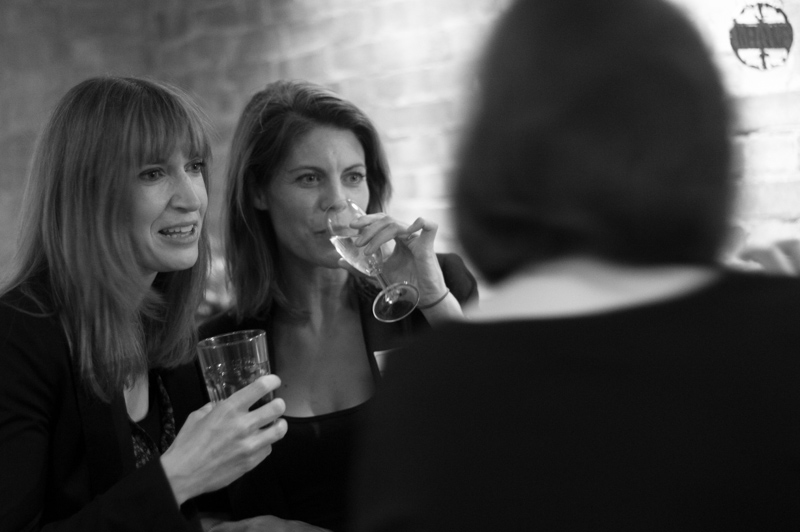 And the book is genuinely funny. When I heard that there is to be a sequel (some time in 2014) I immediately asked if the parents (a pair of hilarious hippie extremists into things like naked moon dancing) will also be in the next book. The answer, pleasingly, was yes.

The book’s jacket – a vibrant mix of black, pink and yellow – designed by Vicky Barker will help it stand out when it arrives in Teen/YA sections. I guess it’s down to teen bloggers like Bella and Rhys to let us know what the intended audience actually think of it. 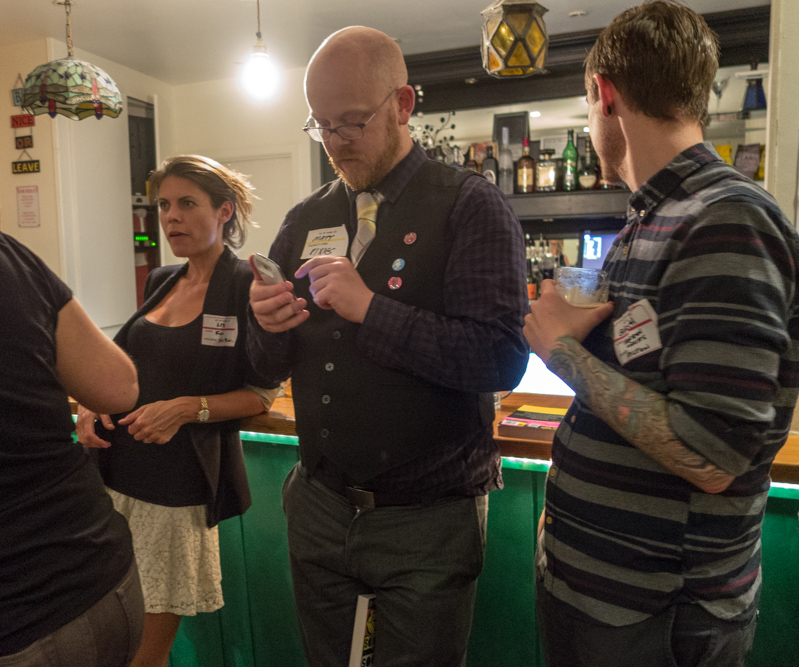 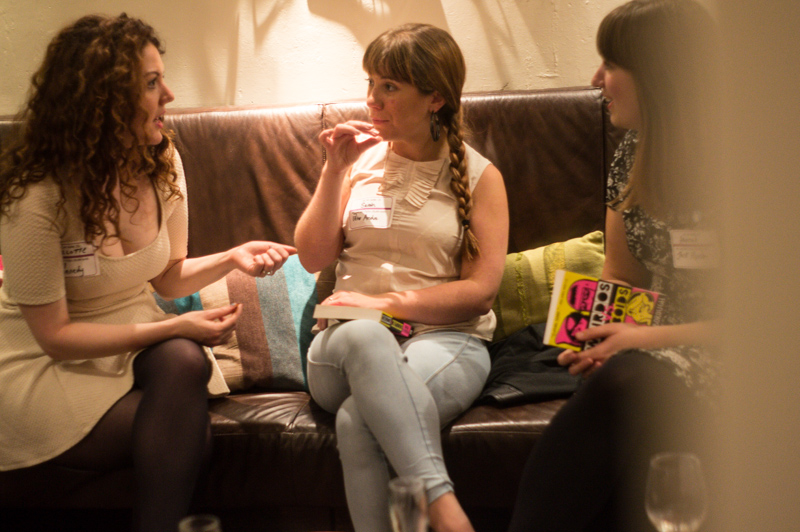 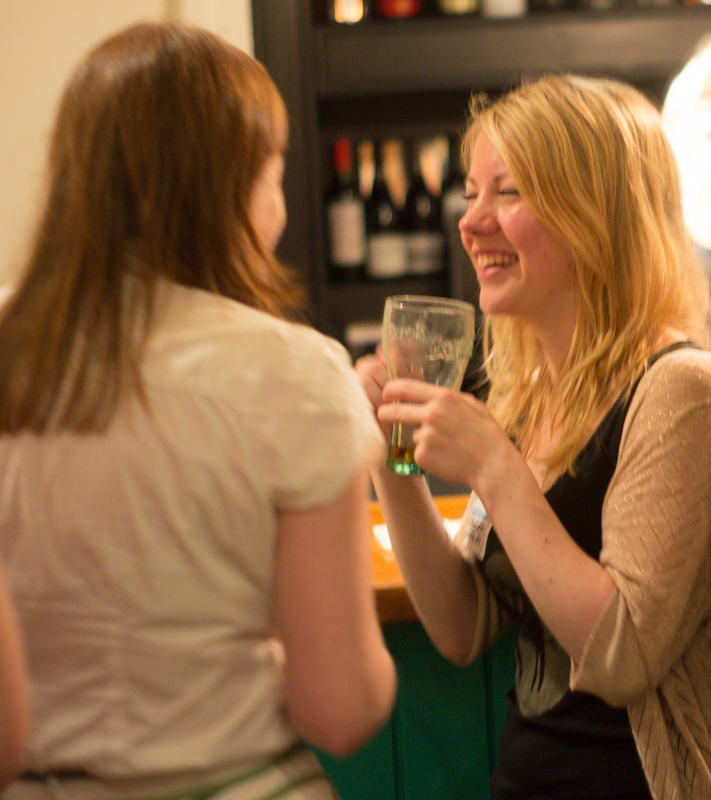