You are here: Home / Archives for magazine 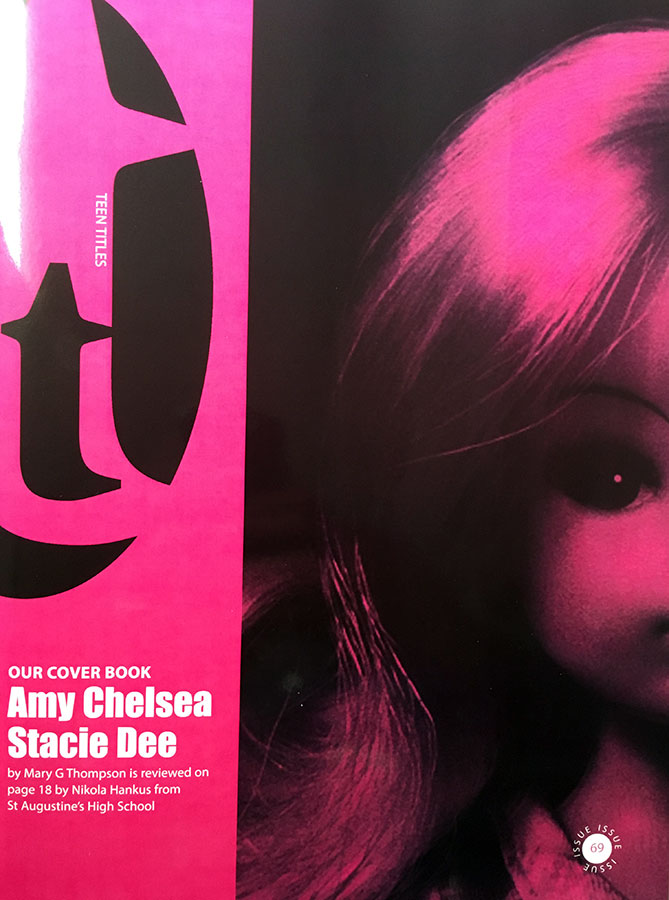 Always a pleasure to receive the latest issue of Teen Titles.
Included in Issue 69, alongside the usual reviews:

This piece by Robert McCrum in Sunday’s Observer, built on a preamble about the boom in the print sales of children’s books, was mainly about Scoop, a magazine for children launched about a year ago.

According to the magazine’s Twitter feed, the effect of the piece has been immediate and marked:

Sixteen fold increase on subs thanks to fantastic press this weekend. Thank you Observer @guardiannews 📈📈📈

Not quite sure what “sixteen-fold” means in this context – surely not that the subscriber base has multiplied 16 times – more likely that requests for new subscriptions following the Observer article were 16 times up on the normal daily average. How significant that is depends on how many new subscribers are added on a normal day.

The Scoop story illustrates the resilience of print and paper in the face of the digital revolution. Inspired by an Edwardian model, Arthur Mee’s Children’s Newspaper, Scoop is a mix of crusade and creativity. Establishment heavyweights such as the playwright Tom Stoppard, plus children’s writers such as Raymond Briggs, author of Fungus The Bogeyman, have adopted its cause. The magazine has also given space to 10-year-old writers and pays all contributors, high and low, the same rate – 10p a word.

Sounds like an enterprise very dear to ACHUKA’s heart.
We wish it every success. 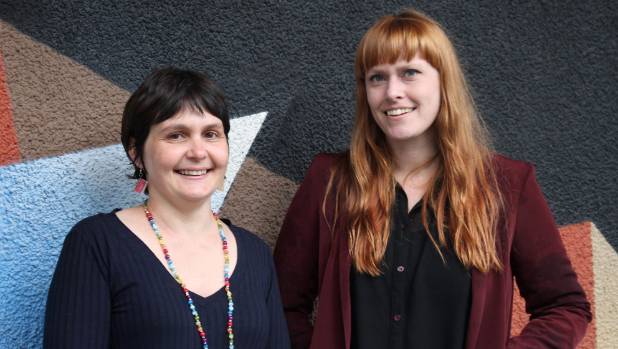 A pair of Wellington women with a combined 25 years experience in the children’s book world are getting ready to share their passion with a wider audience.

Sarah Forster and Jane Arthur are the editors of The Sapling, a soon-to-be-launched online magazine, dedicated to discussing children’s books.

“It’s for adults that think children’s literature deserves a wider understanding. The people that believe that those types of books are serious literature,” Forster said.

While the new website will focus on children’s books, its creators say it’s targeted at adults that think children’s literature deserves a wider understanding and believe those types of books are serious literature.”

We want it to be a place for people who already care about kids books but also a place to convert others into caring too. Once it is launched in early March, the free website will feature reviews, opinion pieces and interviews. New content will be posted almost every day.

“It’ll be fun but also serious, because we know that books are formative for kids’ brains, personalities and futures, and should be taken seriously,” Forster said.

While it will be free for anyone to visit the site, the pair will pay contributors for their content. Creative New Zealand have chipped in with the money needed to pay the first round of contributors.The two women have also created a crowdfunding project in the hope of raising an extra $10,000 to guarantee the online magazine’s first year in operation.With three weeks left of the campaign, the pair had already surpassed their goal and said they were overwhelmed with the positive reception they have received from the public.Ad Feedback”

We always knew there would be a healthy level of support for the website, but we had no idea just how passionate or how numerous our supporters would be.”

Arthur said the experience had been a real confidence booster, with people seeing it as a cool idea and putting their money where their mouth was.

Despite the website not having launched, she said word had got out about what they have been doing, with several people expressing their interest in being involved.”Already we’ve had really cool, award-winning, writers come to us and pitch ideas for the magazine.”

The website is set to launch on March 6 with an estimated 60 per cent of the content ready to go. 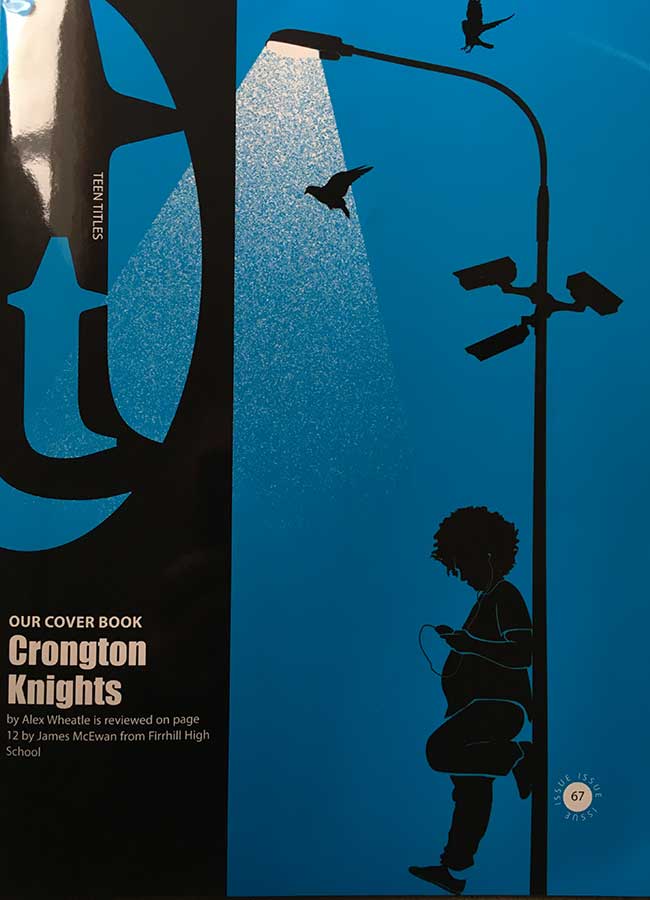 Issue #67 chooses Guardian Fiction Prize winner Crongton Knights as its cover book and carries a feature interview with the author, Brian Conaghan, on p7.
Also interviewed in this edition, Sally Christie author of The Icarus Show, and Tom Becker, author of Dark Room.

Good to read strong reader recommendations fro two teen novels from last year that I enjoyed myself: Radio Silence by Alice Oseman and Thanks for the Trouble by Tommy Wallach.

Remember that the splendid Books for Keeps is no longer published in print form but each issue (and indeed all the back issues) is available in free pdf format.
Quality content.

Children’s publishers Sarah Odedina and Kate Manning will launch The Read Quarterly next January, taking a “critical look at the culture of children’s literature”. Each issue of the quarterly magazine will include articles about children’s literature from around the world, with the first featuring an article on Tara Books (an artisan publisher based in Chennai, India), a discussion on the use of nonsense in children’s literature by American academic Michael Heyman, and a look at the work of Portuguese illustrator Catarina Sobral.

Odedina, publisher of OneWorld’s Rock the Boat imprint, and Manning, sales and marketing director at The Phoenix Comic, said they wanted to “create an environment in which new ideas can be introduced and old ones challenged”.

Odedina said: “The idea for The Read Quarterly is to create a beautifully designed magazine with high quality content, written by a roster of fantastic contributors, that will allow a forum for discussion and celebration of children’s literature and its amazingly talented creators.  The response from people that we have talked to so far from writers, illustrators, booksellers and readers, has been amazing and hugely supportive.”

They are now looking to secure funding for the magazine, which will cost £40 for an annual subscription.Odedina and Manning are both former employees of Bonnier-owned children’s and YA publisher Hot Key Books. Odedina stepped down from the position of m.d. in November 2014, whilst Manning left in March.

via Odedina and Manning launch children’s magazine | The Bookseller.

The Spring edition of Carousel has just been received by subscribers.
Contents include 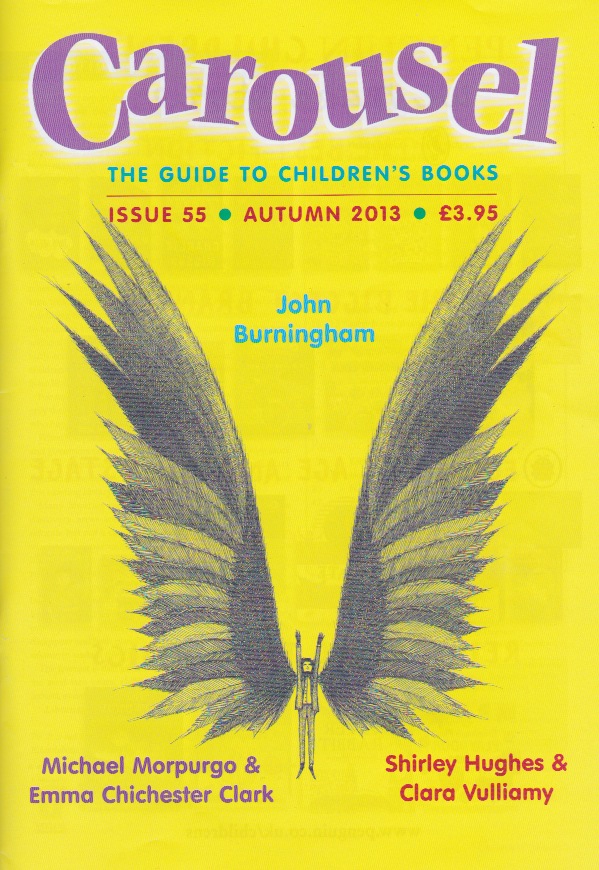 The current issue of Carousel Magazine has, amongst much else and in addition to the usual reviews and the seasonal Christmas supplement, features on:

The Summer edition of Carousel is a great issue. Particularly noteworthy is the 5-page account, by Martin and Sinead Kromer, of a visit to New Zealand. They were there in April for the Margaret Mahy Day celebrations, which included presentation of the Margaret Mahy Medal to Bill Nagelkerke, who called his acceptance lecture ‘The Sorcerer’s Apprentice’, “because that’s what I consider myself, and because that ancient tale offers an excellent metaphor for the magic of story – something that comes to life from the inert materials around us.”
The Kromers’ account also includes a visit to Gecko Press and a meeting with Joy Cowley and Julia Marshall.

Elsewhere in the issue I was pleased to find a profile of the talented illustrator and designer, Petr Horacek. Mike and Theresa Simkin visited Petr at his home in Worcester, where he lives with his wife Clare, an English painter he met when she was studying at the Academy of Fine Art in Prague. “We were privileged to see and hear Petr animating his story boards and demonstrating just how active and energetic his involvement is with storytelling through the thoughtfully prepared and accurately constructed novelty deivces in his booksd, whether it is a hole in the page or a shaped finish to a leaf.”

Apart from all the reviews you will also find interviews with Elen Caldecott, Cressida Cowell and Sally Prue plus much else besides. The cover price is £3.95. Postal subscriptions are available for £11.85 (UK) and £20 (overseas). 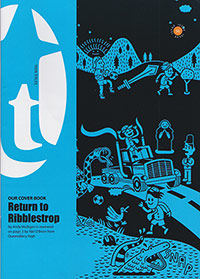 The new edition of Teen Titles (Issue #56) was posted out to subscribers this week.

There are interviews with Damian Dibben (author of The History Keeprs), Philip Caveney (author of Crow Boy), Clare McFall (author of Ferryman), Moira Young (author of Blood Red Road) as well as all the usual reviews and additions to the Author Factfiles.