You are here: Home / Archives for Kickstarter

Island began life as a play. My first ever. A special commission for young people by London’s National Theatre, 2012.

This is what the Independent said about the play:

‘The National Theatre’s terrific new play for over-eights is set on what we call Herschel Island in Northern Canada (the Inuit have another, much older name for it). The one-hour play explores the impact of global warming – think Frozen Planet brought to life for children with characters the audience identify with and care about. Island explores the conflict between scientific and metaphysical truth, colonialism, the exploitation of other people’s environment, the role of religion and the power of storytelling. So it isn’t short of issues for children to think about afterwards, but at the same time it avoids any sense of worthiness and stands up well as a piece of compelling, moving drama.’

I totally loved making the play and working with the incredible creative team – director, actors, designers. But after the show in the Cottesloe Theatre and the 40 London schools tour, it was – all over! Chip-paper! I was amazed. My day job is as a novelist. I’m used to leaving a trace. Quite a fat 300 page trace. A real thing that still floats about when I’m not there. But Island was gone.

The play slipping away much as the island might do one day.

About a year passed. And then there was a sudden flurry of newspaper articles about the melting ice-caps. Five people rang me up in the same week.

What happened to Island? They asked.

Well, nothing. It’s gone. Slipped away.

Then write it as a novel, they said. Our young people need that story more than ever. Don’t you understand? They have to have the chance to engage with what’s going on in the arctic. Do it. Do it now!

And I’ve loved Cameron and Inuluk and the Ice-bear all over again. I hope you might too.

Nicky Singer, who launched a Kickstarter campaign to fund publication of a novelisation of her stage-play Island just over a week ago, writes compellingly about her reasons for doing so. 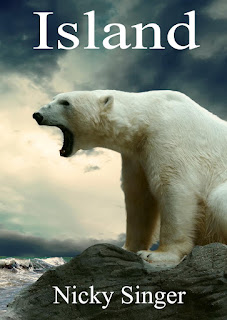 Like Slow Food, and even Slow TV now, Slow Books will be about those quiet, deep things beneath the current market shout of the world. And I have this quiet dream that, one day, Slow Books will gather together writers from all over the world with such stories to tell. And then, maybe, there will be whole shelves of Slow Books. And people who care about such things will walk past the glittery branded covers knowing that, on the Slow Books shelf, they will find something worth dreaming about.

via Notes from the Slushpile: Slow Books.

Jonathan Heilig is hoping to fund publication of his picture book The Day The Sun Went Away via a Kickstarter campaign.

Halfway through the campaign he is more or less halfway to his target.

Check it out and see if you would like to support the endeavour.