You are here: Home / Archives for junior 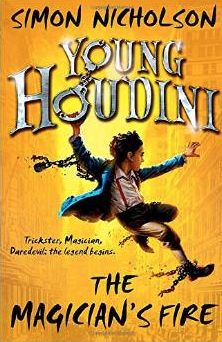 Delivered by the postman just now, a proof copy of next month’s Young Houdini, The Magician’s Fire by Simon Nicholson, described as the “first in a high-concept series packed with daredevil stunts and magic tricks that will leave readers entranced” – and the proof copy comes with three endorsements from readers aged 8, 9 and 11.

“What if the few facts we know of Houdini’s childhood – that he grew up fairly peacefully with his family in Appleton, Wisconsin – turned out to have been a cover-up, devised later in order to conceal a far more thrilling and dangerous truth?”

Looks a promising series for the 7-11 audience.