You are here: Home / Archives for illustrations

A new hardback edition of Roald Dahl’s final children’s book will be released this autumn.

It has a new title to reflect Roald Dahl’s original name for the book, Billy and the Minpins, and is the first time Quentin Blake has illustrated a new Roald Dahl hero in nearly 20 years.

Billy and the Minpins is the story of Billy who saves the Minpins, tiny tree-dwelling people whose children are the size of matchsticks, from the Gruncher. It will be published by Penguin Random House’s imprint Puffin in autumn but no specific date has been confirmed.

The Minpins was first published in 1991 by PRH’s divison Jonathan Cape, illustrated by Patrick Benson in a beautiful colour picture- book format. This edition is still in print today and will sit alongside the new black-and-white edition, Billy and the Minpins.

Blake said: “I was delighted to be asked to illustrate Roald’s Billy and the Minpins; it feels like the cornerstone in our long collaboration together. As Roald’s parting gift, Patrick Benson’s illustrations in the original edition were perfectly suited to the lyrical feel of The Minpins. I have always greatly admired Patrick’s artwork and am so pleased both books will sit alongside each other, reaching fans of all ages. This new edition has nearly fifty pages of black-and-white drawings, which means I can enjoy myself tremendously going into all the details of Billy’s exploits and adventures with the Minpins in the mysterious forest.”

via Roald Dahl’s final children’s book to be reissued with new illustrations | The Bookseller.

The best way to tackle serious issues, said Klassen, is with a solid visual premise. Words aren’t within the jurisdiction of very young children. Their territory lies with the pictures. The trick is to allow kids to suss out the reality of a given situation via the illustrations.

“It’s not just more information,” said Klassen of moments like one in “We Found a Hat” when one turtle says he is thinking of nothing while his eyes are fixed covetously on the hat he wants to steal. “It’s actually the true story.”

So why the hat? Because hats aren’t necessary, said Klassen. If a character wanted his money back or his food back or something consequential along those lines, then the thievery would be justified. A hat is superfluous but sentimental. In these books the hats don’t even really fit the animals who want them.

“That doesn’t matter, it’s beside the point,” said Klassen. “Kids’ books should have a visual premise to solve. At the end of these books somebody better be wearing a hat.”

via Jon Klassen discusses ‘We Found a Hat’ and his other books for children | Newsday.

A broad cross-section of writers, ilustrators and publishers address the issue of equal recognition for illustrators of picture books.

Should illustrators for picturebooks be recognised alongside authors? The fact that this is even still being debated is nonsensical to me. Of course they should. Or rather I should I say, WE should. Some authoritative bodies are better at recognising this oversight (for that is all it is) than others, and really, I do not see any viable defence for the contrary. I am in the fortunate position of having both authored and illustrated books, but also being a gun for hire – brought in to visually co-create a book. I know full well the importance of the role of art in this realm that is equally made up by words and pictures. No one can seriously argue that illustrators do not play just as an important (or dare I say, possibly, occasionally, even MORE important) role than authors of picturebooks. It is as ridiculous as saying that no one judges a book by their cover, when in reality, we all do it. All the time. The cover is the first thing that any parent or child gravitates to when they see a book from across the library or bookshop. They immediately have a relationship with how the art makes them feel. The illustrations in picturebooks are essentially a child’s first interaction with art. A human beings first interaction with their cultural world. To not properly recognise the importance of this is to condemn the art in picturebooks to merely packaging. I’m sure even authors will agree that this should not be the case. Illustrator Mara Cerri talks about her illustrations, and the author’s playful balance of dark and light.

On the 10th anniversary of the publication of Emily Gravett’s thrilling first book Wolves, the author and illustrator shares her sketches and tells the story of how she created her groundbreaking instant classic

via Jackie Morris: love for libraries – in pictures | Children’s books | The Guardian.

Egmont Publishing has signed award-winning illustrator, Alex T Smith, to illustrate a sumptuous new edition of the classic tale of The Hundred and One Dalmatians.

Publishing in hardback with an RRP of £10.99 this September, in time for Christmas, this edition will feature a beautiful cover jacket, and illustrations throughout.

Alex T Smith commented: “I’m delighted to be working with Egmont on such an exciting and special project. The Hundred and One Dalmatians is one of my very favourite books, so to be asked to reimagine it for a new generation of readers is an incredible honour. I can’t wait for everyone to meet Cruella again – and hopefully go dotty over all those puppies!”

Melissa Fairley, Publishing Director, Egmont Publishing, said of the project: “Alex T Smith is the perfect choice for this new edition of Dodie Smith’s endearing classic. We knew how much he loved the book from his tweets, and with his amazing ability and love of drawing dogs he comes to this project with a real passion, successfully elevating this timeless tale to new heights. Children and adults alike will adore his extremely opulent, yet sinister portrayal of Cruella de Vil; contrasted beautifully with his loveable and mischievous Dalmatian puppies.”

Alex T Smith created the hugely successful Claude series which has been published in 16 languages, sold 65,000 copies in the UK alone and is being developed into a TV series. 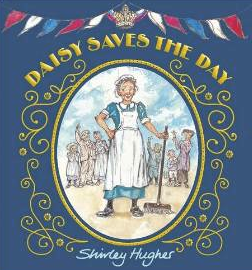 How lucky we are that Shirley Hughes is still producing such wonderfully written and illustrated picture books. Set at the time of the coronation of King George V, when the actual day of the procession comes round Daisy, working as a scullery maid in a big house, is left Cinderella-like alone. She ingeniously fabricates some bunting from red, white and blue laundry, including a pair of red bloomers belonging to one of the two old ladies Daisy is employed by. They are much annoyed about this, but fortunately an American niece, staying in the house at the time, helps to prevent Daisy from being dismissed. She stays on, but in disgrace, and is hardly spoken to by the other servants. Then, when a fire breaks out, it is Daisy who ‘saves the day’.

Here is Shirley Hughes herself, talking about the book: 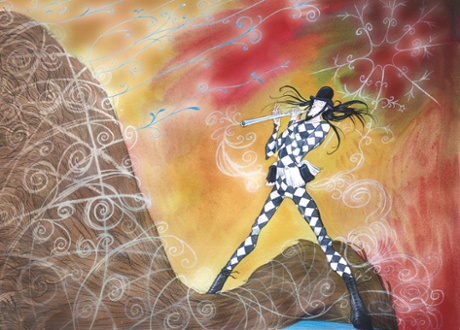 How much do you love Chris Ridell’s illustrations?

They are wicked, really good. I’m so glad he did the book! When I first saw them, I was astonished by his pictures. It’s not like it’s exactly how I envisaged it because I’m not an artist, but I can’t even see it how I imagined it any more. Everything is pure Chris, With the exception of the Piper, who Chris first drew with a black pointy hat and beard, doing a jig. I was like no, he’s got to look like an interdimensional, manga droog. He’s got to look like someone who doesn’t belong anywhere, so I did ask for changes. I asked for pointed shoes, long straight hair, chequered eyes, but other than that it’s entirely Chris.

via Russell Brand: why I wrote the Pied Piper of Hamelin | Children's books | theguardian.com.

Trained illustrator Dave Shelton, who was born and raised in Narborough, is preparing to release the follow-up to A Boy and a Bear and a Boat.

The novel earned him the 2013 Branford Boase Award for children’s literature and sold tens of thousands of copies around the world.

His new book, Thirteen Chairs, which also features illustrations by Dave, is aimed at young readers aged 10 and upwards and he is hoping for an even bigger success.

Thirteen Chairs tells the story of a boy called Jack.

Dave said: “Jack goes to a mysterious house and finds 12 people at a table in the candlelight and each of them tells a ghost story. I tried to use a variety of character voices and make the book darker than A Boy and a Bear and a Boat.”

Dave, 46, who lives in Cambridge with his partner, her daughter and a dog and a cat, said he was now much more confident about his writing.

He said: “The only characters in the first book were the boy and the bear, who spent the whole of the story in the boat, so it was much easier to write and keep track of the characters.

“With the new book there were the 13 characters in the house and all the people in the 12 ghost stories so it took a bit longer to write than the publisher expected!”