You are here: Home / Archives for Goosebumps

PS: I was watching an interview where you said you used to write a book a month. That’s impressive! What was your process for that?

R.L.: Back in the height of Goosebumps in the ’90s, I did twelve Goosebumps books a year and twelve Fear Street books. I don’t know how I did it. Honestly, I don’t know how! I didn’t get out much, but I wrote a novel every two weeks. The way I could do it was to outline them all first, and I still do. Nobody wants to hear that — everybody hates to outline. Kids especially, they hate that advice. But I do a complete chapter-by-chapter outline of every book before I write it. Everything that’s going to happen in the book is in the outline. So when I sit down to write the book, I’ve done the hard part. I’ve done all the thinking, and then I can write really fast and just enjoy the writing because I’ve done all the work.

Did you feel any pressure at all thinking you’ve got to sound or look like a person who is still alive?I didn’t really because even though I’m playing a real person, this is obviously a fictionalized version of his life and nothing that happens in this movie actually happened to him, other than him writing all the books. So I felt like, I was just going to approach it as a character, doing what I thought was most dramatically interesting and right for what was needed. I also got to meet R.L. and he’s a really great guy. Really smart and funny and sweet. But I made [the character] more of a sort of curmudgeonly dark, brooding beast master. So from the very beginning, I was taking liberties. I think he’s cool with it though. [Laughs] He’s been on set and he actually did a little cameo. He saw what I was doing and he was digging it. Or at least he pretended like he was digging it.

Goosebumps, the movie, is based on the popular children’s book series by R.L. Stine. Variety sums up the plot thus: “Story is loosely based on R.L. Stine’s book series and follows Minnette’s character, who moves from New York City to the small town of Greendale, Maryland, where his secretive new neighbor turns out to be veteran young adult horror author R.L. Stine (Black). When all the many demons of Stine’s mind are set free by Slappy, a demonic ventriloquist’s dummy, it’s up to Minnette’s character and Stine’s niece Hannah to put all the evil genies back in the bottle.” 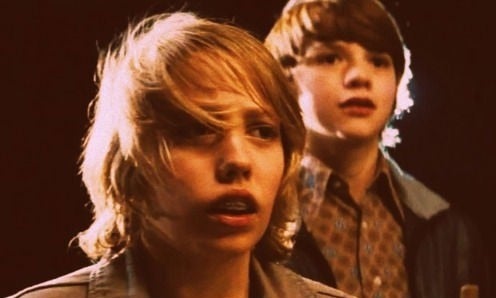 Filming has begun on the Goosebumps movie, starring Jack Black and directed by his Gulliver’s Travels collaborator Rob Letterman.

Variety reports that Super 8’s Ryan Lee has now joined the cast, alongside Black, Dylan Minnette (Let Me In) and Odeya Rush (The Odd Life of Timothy Green).

The film comes from a screenplay by Darren Lemke (Jack The Giant Slayer) and Mike White (School of Rock), and a story by 1408’s Scott Alexander & Larry Karaszewski and Lemke.

A gallery of ten Goosebump covers:

R.L. Stine’s Goosebumps books have long been a staple for horror-loving children. Like Scary Stories to Tell in the Dark, the series introduced a lot of us to the macabre with (mostly) age appropriate tales of terror. As many as 46 books from the franchise have been ranked among the best selling children’s books of all time, and the stories have been adapted for television, with a Goosebumps feature film in the works.

For some fans, the covers of these beloved books are the best part: Tim Jacobus, illustrator of the original series, is a talented artist who brought Stine’s stories to life with menacing zeal. So in celebration of one of the most enjoyable children’s series of all time, we’ve collected ten of the most ridiculously awesome book covers from the original Goosebumps book series.