You are here: Home / Archives for Google

Louisa May Alcott based her characters in Little Woman on her own family and Google is commemorating her 184th birthday with a Doodle displaying the main cast.

via Who was Louisa May Alcott? Little Women author celebrated with Google Doodle.

Joan Aiken, the British author who wrote the timeless Wolves of Willoughby Chase, has been honoured with a Google Doodle on what would have been her 91st birthday.
Aiken, who died in 2004, wrote her first novel aged 16, and produced over 100 books during her lengthy career, although her most-recognised work was the 1962 novel that spawned the series of children’s books known as the Wolves Chronicles.
Doodle artist Kevin Laughlin marked the series, which chronicles the lives of children in an alternate 19th Century history of England in which King James II was never deposed.

ogle today launched a new free tool called Classroom as part of its Google Apps for Education suite. In short, Classroom helps teachers create and organize assignments, provide feedback to their students, and communicate with their classes.

About to settle down to this weekly geeky Google+ hangout, chaired by Morten Rand-Hendriksen – always learn something new

English author and poet Edith Nesbit would have been 155 today and she has been honoured with a Google doodle.

She wrote or collaborated on over 60 books of fiction for children but her most famous work was the The Railway Children. 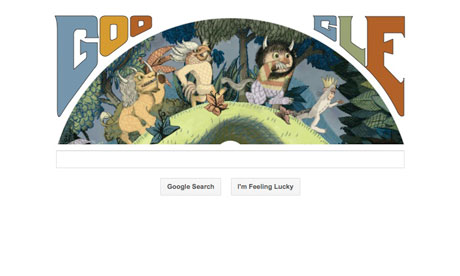 The illustrations of renowned childrens author Maurice Sendak, who would have turned 85 on Monday is the subject of Googles latest doodle.The doodle is an animation of the illustrations contained in some of his best-selling books such as Where the Wild Things Are, which has sold around 17 million copies worldwide, mostly in the US.Mysterious creatures are seen dancing around in a bizarre set of colourful outfits.

A brief video highlighting new features being rolled out to users of Google+ Photos this week: