You are here: Home / Archives for generations 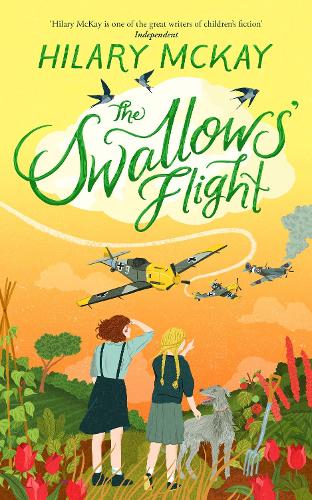 “A beautiful story, touchingly told and utterly without sentimentality. Hilary McKay has a keen ear for sparing dialogue, the banter of families, the awkwardness of saying what needs to be said. You believe completely in these children, their relationship with each other, their role in the family, simply by the way they communicate. What’s more, you care about them. This is a book for all the family to love.” Berlie Doherty
“I never intended to write a sequel. If I had, I wouldn’t have given the characters so many children. I ended up with 26 main characters and a dog! My editor Venetia Gosling drew me a huge family tree, and she told me the story of her granny on a farm in Kent, during the Second World War, the Battle of Britain. She was a very young girl, alone on the farm, and a dogfight was happening, and an airman came out of his plane, and Venetia’s granny ran to rescue him, and he survived. I used that story as the basis of The Swallows’ Flight.” Hilary McKay, Books for Keeps
“McKay refuses to dumb down the history, writing with such clarity and understanding that you can’t fail to be caught up in the cares of her loveable cast.” Alex O’Connell, The Times
“Hilary McKay’s superlative The Skylarks’ War seemed to make the Great War new, winning many hearts and the Costa children’s novel award. This compassionate sequel does the same with the Second World War as it continues the stories of kind-hearted Clarry and those she cares about.” Nicolette Jones, Sunday Times
“Revisit familiar characters from The Skylarks’ War and see how they have grown into themselves, having families and careers of their own in the new Britain after the First World War and before the second commences.” Just Imagine

Four ordinary lives connected by extraordinary circumstances, Hilary McKay’s stunning companion novel to the Costa Award-winning The Skylarks’ War features the next generation of characters as they move from childhood to the threshold of adulthood amid the chaos and conflict of the Second World War.

Erik and Hans admire swallows over the rooftops of Berlin, little thinking that one day they will be flying above England, risking their lives in a war they both detest.

Ruby and Kate, great friends despite their differences, find themselves racing towards a danger that neither of them could possibly have imagined.

Read the Books for Keeps interview with the author.

Warmly recommended, and not just for Eoin Colfer’s humorous description of his 1970s childhood:

I grew up in a dark time, dear reader. A time when there were only two TV channels and an inordinate amount of the programmes on these channels seemed to feature cows being sold or elderly men pounding their knees with spoons. We had heard rumours of the existence of a video game, but that was in America and needed a supercomputer the size of a slurry tank to play it. And if you wanted to enjoy modern music you were forced to drop a metal needle with pinpoint accuracy onto a revolving and fragile plastic disk. Honestly it was easier for Indiana Jones to steal the golden idol than it was for me to listen to Pink Floyd.