You are here: Home / Archives for gaming 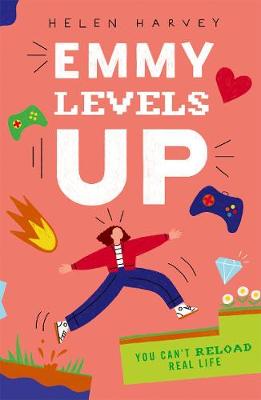 Emmy is brilliant at the computer game, Illusory Isles. Her avatar is a powerful fire elemental with magma claws and flaming breath. When Emmy’s gaming video gets a front-page feature, thousands of devoted fans flock to watch her battle the ultimate online baddie, the Mulch Queen herself.
Life at school is the exact opposite. Emmy is friendless and bullied by Vanessa AKA the Queen of Mean. To Vanessa and her gang, Emmy is a weirdo with bad handwriting, horrible fashion sense and no dad. But if Emmy can take on the Mulch Queen online, perhaps she can also find a way to take on Vanessa too? Emmy decides to level up and solve this challenge alone. But then she discovers that Mulch Queens and Mean Queens are much easier to face when you have a little help from new friends . . .

Debut children’s novel from an advocate of the benefits of video gaming.
Follow Helen Harvey on Instagram: https://www.instagram.com/hellionharvey/

Livingstone is widely hailed as the founding father of the British games industry. He launched Dungeons and Dragons, a role-playing game that thrilled adolescents of the late 1970s and 1980s; co-founded Games Workshop, which became one of the biggest games companies in the world; and wrote or co-wrote 15 gamebooks in the Fighting Fantasy series, which has sold over 17m copies in 31 languages. He still has six friends round to his house regularly to play games, keep a record of the scores and compete for their own annual trophy. “I’m the current champion,” he tells me. “I love board games with like-minded friends, having a laugh, doing deals, reneging on them.”

But on the eve of his 65th birthday, he is talking to me about his plans for a network of free schools which, he thinks, can transform our approach to secondary education. He speaks quietly and rather flatly; there’s nothing flamboyant about him, and he sometimes sounds slightly bored, as if he’s reading out an inventory and would rather be playing games. But there’s no mistaking his conviction. “Children today are totally different from 50 years ago. They run their lives through social media and smart phones. They share their ideas and their creativity. They collaborate naturally.” Yet when they go to secondary school, he argues, they meet a regime of standardisation and conformity, requiring them “to memorise a lot of stuff they won’t ever need because they can google it or whatever”.

via From the maker of Lara Croft: the teenager’s dream of a free school | Peter Wilby | Education | The Guardian.

Research recently published by the National Literacy Trust and educational publisher Pearson shows that among low-income families, technology can be a “more engaging learning tool” for three- to five-year-olds than books. Boys were twice as likely as girls to spend more time with stories on touch screens than printed stories.

Early years are the vital time to get hooked on books. As boys get older, quiet reading takes a back seat to friends, homework, sports and computer games. Children’s author Jeff Norton was himself a “game-obsessed… very reluctant reader” as a youngster. His popular series MetaWars was deliberately conceived to be as immersive and addictive as a video game. Former teacher (and keen gamer)Simon Scarrow’s novels about Roman gladiators Cato and Macro have been wildly successful, and have now inspired a free app game. With the ability to unlock book extracts, it’s a clever way of connecting with reluctant readers.

Tempting boys into fiction isn’t just about building literacy skills for the sake of passing tests: it’s about developing empathy and encouraging escapism. Novels, according to Scarrow, “offer a far greater degree of creative action for a reader and therefore [a] greater sense of immersion”.

via Give boys screen time and they’ll start to read | Books | The Guardian.

Children’s book character The Gruffalo has a new website, which is filled with games based on illustrations by Axel Scheffler.
The new website has been created by Aardman, working with digital consultancy Disctinction, and was commissioned by Macmillan Children’s Books.

The site is being released ahead of the 15th anniversary of the first Gruffalo book, written by Julia Donaldson and illustrated by Scheffler, which is in 2014.

James Luscombe, head of web development for Pan Macmillan, says, ‘The Gruffalo, Julia Donaldson and Axel Scheffler are all simultaneously one brand and three distinct brands, and we needed to represent this clearly for the best user experience.’

New survey suggests the rise of tablet use by children may be having a negative impact on book reading habits:

According to a survey of 2,000 British children and parents conducted by Nielsen Book in June this year, 50% of family households now own at least one tablet, up from 24% a year ago.

Is this a good thing for kids’ reading habits? Are they hoovering up e-books and delighting in digital book-apps on these devices? In a word: no. At least not according to data shared at The Bookseller Children’s Conference by research firm Nielsen Book.

The good news? 32% of children still read books for pleasure on a daily basis, the second most popular activity behind watching TV (36%), and well ahead of social networking (20%), watching videos on YouTube (17%) and playing mobile games and apps (16%).

On a weekly basis, 60% of children are reading books for pleasure, and if you factor in children who are being read to by parents, that percentage climbs to 72%. But…

“But there’s a really disturbing pattern beginning to emerge when you look on a weekly basis,” said Nielsen Book’s Jo Henry, presenting the findings to an audience of publishers.

Only three activities increased in percentage terms between 2012 and 2013: playing “game apps” (the term used by Nielsen Book), visiting YouTube and text messaging. Reading? That was down nearly eight percentage points.

“It’s a snapshot, not a sustainable trend and next year it might go up again. But this is alarming: children are being less engaged with reading,” said Henry, who also pointed to industry figures showing an 8% year-on-year drop in (printed) books bought for children.

“I want to stress that most children are still medium and heavy book readers, but what we’re seeing is a really significant rise in the number of occasional and even non-readers in the children’s market.”

via Children’s reading shrinking due to apps, games and YouTube | Technology | theguardian.com.

The first children’s book based on the Warcraft franchise will go on pre-sale later this year and make its premiere at BlizzCon, Blizzard Entertainment announced at San Diego Comic-Con today.

The debut children’s book, titled Snowfight, is written by senior VP of story and franchise development Chris Metzen and illustrated by Blizzard artist Wei Wang. "I’ve been thinking about it for a while," Metzen said, saying that he’s watched his "rugrats" grow up alongside World of Warcraft, which will turn nine years old this November, and that they’ve been curious about the characters and lore.

via World of Warcraft gets its first official children's book | Polygon.