You are here: Home / Archives for family

Nesbit’s influence can be felt everywhere from the Chronicles of Narnia to Kate Saunders’s Costa Prize-winning Five Children on the Western Front, which takes Cyril, Robert and the rest from the eternal Edwardian summer of the earlier books to the First World War. Meanwhile, Jacqueline Wilson’s modern retelling, Four Children and It, is currently being made into a film with Michael Caine as the Psammead.The link between Wilson and Nesbit is closer than you might think. Wilson’s resolutely contemporary creations, Tracy Beaker and Dolphin in The Illustrated Mum, share the same determination and hopefulness that make Nesbit’s children, despite the knickerbockers and pinafore dresses, still as fresh and engaging still as they must have been a century. Nesbit’s clear eye for the way we interact makes her a startlingly modern writer. 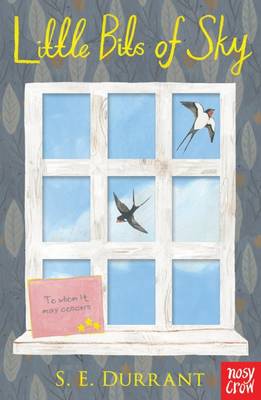 A memorable and moving tale about growing up, making friends and finding a home.

“I’ve put this story together from the diaries I kept when Zac and I were children. I wrote them because I felt we were almost invisible and I wanted to make sure our story was told, and also in the hope that life would get better for the small unloved girl that was me, and my even smaller unloved brother.”

Ted Sarandos, Netflix’s chief content officer, said Sunday the on-demand video provider is “doubling down” on children’s programming, increasing the number of family-friendly original series from the current 15 to 35 in the next year.

Speaking at the Television Critics Association in Pasadena, Calif., Sarandos said Netflix NFLX, -2.82%   has become “a family product that everyone is using in the house.”

“Families have subscribers with kids in the house, and they tend to be much more engaged,” Sarandos said. “We’ve had great success with our original content. Given the complexity of children’s TV on cable these days, creating and managing our own content is preferential.”

One of those kid-friendly programs is “Fuller House,” the revival of the popular 1990s ABC sitcom, that will be released in February.

via Netflix ‘doubling down’ on children’s programming – MarketWatch. 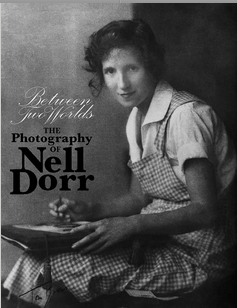 On Sunday, May 3, 2015 from 1 to 3 p.m. the Gunn Museum in Washington, Connecticut will host a free opening reception for their new exhibit, Between Two Worlds: The Photography of Nell Dorr.

This retrospective exhibit commemorates the 50th anniversary of the Horace Mann School’s John Dorr Nature Laboratory in Washington and the 75th anniversary of the Dorr Foundation. Nell Dorr’s photographs and artifacts from the Massillon Museum in Ohio, the Amon Carter Museum of American Art in Texas, and area residents are featured in this show. New touch screen technology has been incorporated into the exhibit allowing visitors to watch friends and descendants share their stories about Nell Dorr and the lasting impact that she made on their lives and our town.

via Between Two Worlds: The Photography of Nell Dorr – News – The Litchfield County Times.

Nicholas Nixon was visiting his wife’s family when, “on a whim,” he said, he asked her and her three sisters if he could take their picture. It was summer 1975, and a black-and-white photograph of four young women — elbows casually attenuated, in summer shirts and pants, standing pale and luminous against a velvety background of trees and lawn — was the result. A year later, at the graduation of one of the sisters, while readying a shot of them, he suggested they line up in the same order. After he saw the image, he asked them if they might do it every year. “They seemed O.K. with it,” he said; thus began a project that has spanned almost his whole career. The series, which has been shown around the world over the past four decades, will be on view at the Museum of Modern Art, coinciding with the museum’s publication of the book “The Brown Sisters: Forty Years” in November. 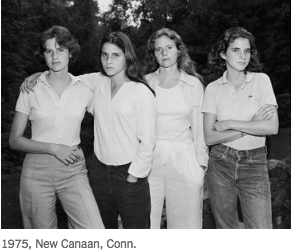 Who are these sisters? We’re never told (though we know their names: from left, Heather, Mimi, Bebe and Laurie; Bebe, of the penetrating gaze, is Nixon’s wife). The human impulse is to look for clues, but soon we dispense with our anthropological scrutiny — Irish? Yankee, quite likely, with their decidedly glamour-neutral attitudes — and our curiosity becomes piqued instead by their undaunted stares. All four sisters almost always look directly at the camera, as if to make contact, even if their gazes are guarded or restrained. 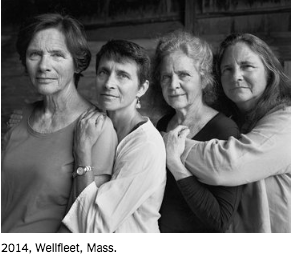 The family of Cold Comfort Farm author Stella Gibbons has revealed the existence of two completed novels that they hope a publisher will be interested in taking on:

A PAIR of unpublished novels by the renowned comic novelist Stella Gibbons have come to light three decades after they were finished.

And the New Journal can now reveal how the writer’s daughter, Laura Richardson, and her family hope they may find a publisher willing to finally put her last two books into print.

The manuscripts have been gathering dust in a drawer for more than two decades and will be a source of great excitement in literary circles, where her works have enjoyed a trendy renaissance.

The New Journal revealed last week how Ms Gibbons is set to have a plaque unveiled on her Vale of Health home where she penned the classic Cold Comfort Farm, a book that has enchanted readers since its first edition in 1933.

Laura, who lives in Kentish Town, contacted the paper last week after reading of the plan by the Heath and Hampstead Society to honour her mum and in an interview recalled how Stella Gibbons finished two novels that she never sent to her publisher prior to her death in 1989.

Ms Richardson said: “The first is called An Alpha and is about a young woman who is from the Far East. She moves to Britain and becomes a successful writer.

“The second is called The Yellow Houses and is a bit of a ghost story. My mother converted to Christianity after meeting my father – she had been brought up an atheist – and they dabbled in spiritualism. This novel deals with that and other issues such as reincarnation. It was about a house where spirits flourished.

“They were finished and I would love to see them published.”

Talent shows such as The X Factor and Strictly Come Dancing are educational because they teach people that perseverance and hard work can get you to the top, one of the nation’s best-known children’s authors has said.
Dame Jacqueline Wilson said that prime-time reality programmes highlight how anyone can succeed regardless of background and praised their ability to bring families together.
The former Children’s Laureate poured scorn on people who turned their noses up at such shows, saying that they represented one of the few areas in television where older and younger entertainers could enjoy equal billing.
Her comments are in stark contrast to a number made recently by school heads who have suggested that pop stars such as Miley Cyrus and the celebrity culture more widely are leading girls astray.
Dame Jacqueline, best known for her Tracy Beaker books, chronicled her appreciation of talent shows in an article for yesterday’s Mail on Sunday.

From the British Library’s What’s On webpage
Key dates:

Summer of Free Family Fun
There’s lots going on in our Summer of Family Fun – and it’s all completely free! Come along and play with props to make images in our pop-up photographic studio,  create unique illuminated Letters in our artist-led workshops, enjoy writing Nonsense verses and turning them into works of art, or let yourself go by singing songs in Britten-themed workshops.

This series of free events, inspired by the Library’s world-famous exhibitions and collections, will bring you and your children together for unforgettable fun this summer.

via Summer of Free Family Fun. Michael Jang, a well-known photographer that has worked with the likes of Jimi Hendrix and Ronald Reagan, is showing a collection of photographs that hits closer to home. In the 1970’s, while still a student in California, Jang began taking photos of his Chinese-American family.

The photographs show the intimacy of family but also the suburban experience of the 1970’s, a quintessential time for ‘Americana’ culture.

For Jang, who was influenced by the street photographer Lee Friedlander, the opportunity to capture his family proved fruitful. ‘Every day was a new visual discovery.’

This collection of photographs will be on display at the Stephen Wirtz Gallery in San Francisco on May 3.

via Stunning photographs of Chinese-American family in the suburban 70's on view for the first time in four decades | Mail Online.