You are here: Home / Archives for fair

A taste of the Bologna Book Fair for those of us stuck in chilly England.

The Bologna Book Fair’s website is posting short video clips of the fair:

The show’s proximity to the London Book Fair (which is taking place this week) didn’t appear to dampen attendance, which was up more than 9%, according to BCBF officials. Several publishers and agents PW spoke to were continuing straight on to London. Next year’s fair is scheduled for April 3–6, which puts it after the London Book Fair (March 14–16) for the first time since 2007, and well before the Easter holiday on April 16.

via Bologna 2016: Wrapping Up a Quietly Busy Fair.

Charlotte Eyre summarises some early deals made at (and prior to) Bologna….

Bloomsbury bought world rights to a YA novel by début author Karen Gregory on the first day of the fair yesterday (Monday 4th April). Gregory’s Countless is about a girl called Hedda who decides to call a truce with her eating disorder, which she calls “Nia”, when she finds out that she is pregnant. Publishing director Rebecca McNally acquired world rights in a two-book deal from Claire Wilson at Rogers, Coleridge & White. Publication of the title is scheduled for May 2017.

Meanwhile Bloomsbury Children’s has sold Letters to the Lost, a Young Adult fiction title by Brigid Kemmerer, in four territories: the Netherlands, Spain, Latin American (Spanish-language) and Serbia. The publisher also expects to close deals with publishers from Brazil, Germany and France at the fair. Bloomsbury bought world rights from Mandy Hubbard at D4EO Literary Agency.

Anne Clark at the Anne Clark Literary Agency sold three books to Oxford University Press ahead of the opening of this year’s fair. World rights were sold in Middle Grade thriller Stunt Double and another, as-yet-untitled book by Tamsin Cooke; and Lucy’s Magical Surprise, an animal story for younger readers written by Anne Booth.

Barrington Stoke will publish a dyslexia-friendly version of John Steinbeck’s classic novel Of Mice and Men after agreeing a sub-licensing deal with Penguin Random House. The accessible version, due for release in September, will be printed on a tinted background, with large-print text and spacing. Barrington Stoke said it “may consider” publishing accessible versions of more classic novels in the future.

More via Rights scooped up on first day of Bologna | The Bookseller.

Children’s book publishers, agents, authors, and artists from around the world descended on Bologna, Italy, this week for the 51st annual Bologna Children’s Book Fair. While official attendance figures aren’t yet available, program director Roberta Chinni told PW that she was "very happy" with attendance and that the publishers she had spoken with were pleased with the number of appointments and overall energy of the fair. For those who couldn’t attend, here’s an overview of the fair in photos.

Click through for the gallery
via Bologna 2014: Photos from the Fair.

Another report from Bogona on the ris of realism and the fall of dystopia:

I’ve been coming [to Bologna] for 12 to 15 years, and I’ve never had as many European publishers asking for middle-grade,” said Steven Chudney of the Chudney Agency. In terms of realistic YA fiction, one of Chudney’s major titles is Everything That Makes You by Moriah McStay, which HarperCollins will publish in 2015; German rights to the project have sold.

“There will be room again in the market for realistic YA, especially with the Fault in Our Stars and If It Stay movies coming out later this year,” said agent Brenda Bowen of Sanford J. Greenburger Associates. She added that she’s “pleased” with the picture book market, too. “We’re selling foreign rights, and people are still looking for them.”

Alexander Slater, foreign rights agent at Trident Media Group, also felt that “contemporary realism” is having a moment, with “international publishers moving away from fantasy, science fiction, and paranormal.” On the middle-grade side, Trident represents R.J. Palacio, and Slater said that the Wonder phenomenon continues to grow (rights have sold in 40 territories). Thus, he said there had been “definite interest” in the author’s follow-up book, 365 Days of Wonder: Mr. Brown’s Book of Precepts, which is due out from Random House in late August.

And David Fickling has been there with his own special agenda:

British publisher David Fickling, whose company went independent last year, was back in Bologna after a three-year absence, with a backpack filled with books. “I’ve got five fantastic novels I’m shopping,” he said. He wants to publish for all age ranges, and one category he’s excited about publishing is nonfiction: “I want to bring the effort that people put into picture books into nonfiction,” he said.

Charlotte Eyre reports from Bologna for The Bookseller – “hot middle-grade is still the dream acquisition” apparently…
oh, and its’ rather cold, but the ice cream is as good as ever:

So far in the fair (day two), no-one has struck a deal to match last year’s record-breaking Half Bad from Penguin, but most people have pointed out that the fair is as busy, if not busier, than last year. As one rights manager said to me, ‘Just look at the queues for the ladies loo.’
Many publishers have stressed the international reach of the fair, doing business with companies from Asia, America and South America. France, Germany and Brazil are still big buyers but some publishers said that countries which suffered a downturn in their publishing businesses, such as Italy and Greece, are now back making deals.
A hot middle-grade title is still the dream acquisition for many and Puffin is selling rights for its humorous middle-grade debut, The Unlikely Adventures of Mabel Jones by Will Mabbitt, about a girl who finds herself on a pirate ship, all over the place. And Bloomsbury is really excited by Anyone But Ivy Pocket by Caleb Krisp, which it had sold rights for in 10 languages before the show even began.
A lot of people are not quite so excited by YA, hinting that the market is quite saturated with teen books, but some YA deals are big enough to get excited about, such as Macmillan’s six-figure E K Johnston acquisition.
The buzz around single books would suggest that the trend for series fiction is declining and as a Random House US publisher has said, even if books nowadays are part of a series, they have to still read as standalone books.
There is little talk of digital from mainstream publishers – it’s not that digital isn’t important, but Bologna doesn’t seem to be the place where they want to explore it – but the presence of app developers and software creators, and the Digital Café, shows that innovation is still happening.

via Bologna: ice-cream and middle-grade | The Bookseller. 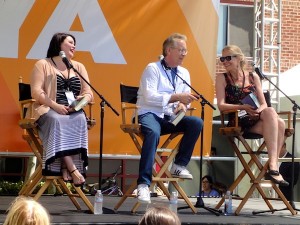 The Los Angeles Times Festival of Books drew thousands of attendees this past weekend, and as usual there was plenty of authors, panels, and activities for book-loving children and teens.

There really ARE lods of photos here. Keep on scrolling!