You are here: Home / Archives for Edinburgh 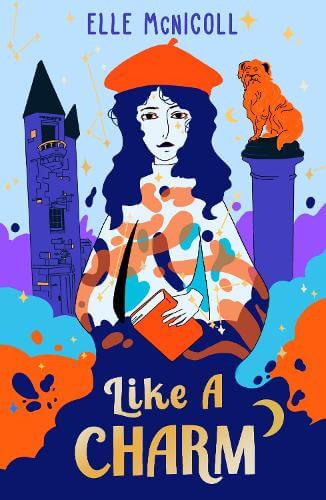 Edinburgh is a city filled with magical creatures. No one can see them… until Ramya Knox. As she is pulled into her family’s world of secrets and spells, Ramya sets out to discover the truth behind the Hidden Folk with only three words of warning from her grandfather: Beware the Sirens.

Plunged into an adventure that will change everything, Ramya is about to learn that there is more to her powers than she ever imagined. 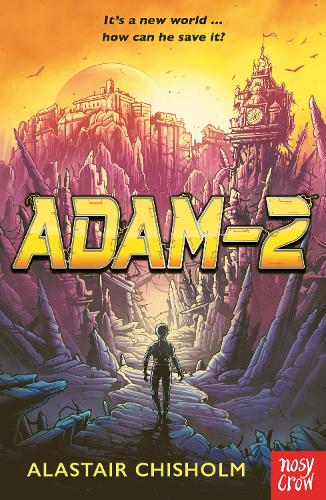 “In Adam-2 Chisholm has given us an allegory which hits hard in the current climate and a thought-provoking solution to the ills of the world.” BfK 5-star review

The robot Adam-2 has been locked in the basement of a lost building for over two hundred years – until one day he is discovered by two children, and emerges into a world ruined by a civil war between humans and advanced intelligence. Hunted by both sides, Adam discovers that he holds the key to the war, and the power to end it – to destroy one side and save the other. But which side is right? Surrounded by enemies who want to use him, and allies who mistrust him, Adam must decide who – and what – he really is. 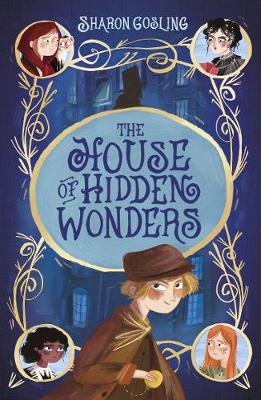 A thrilling historical adventure featuring mystery in the tunnels beneath Victorian Edinburgh.

Zinnie and her sisters live in the murky tunnels beneath Edinburgh’s Old Town. They keep out of the way of the authorities and remain undetected. Until, that is, rumours of a ghost bring unwanted visitors into the caverns they call home. Among them, a young Arthur Conan Doyle, keen to investigate, and MacDuff, the shady owner of Edinburgh’s newest attraction, the House of Wonders.
Caught up in a world of intrigue and adventure, Zinnie seeks answers. But how can she discover what secrets lie in the House of Wonders while also protecting the sisters she holds so dear?

As regular ACHUKA followers will know, we’re always pleased when a new edition of Teen Titles arrives in the post, and Issue #60 went out to subscribers a day or two ago. 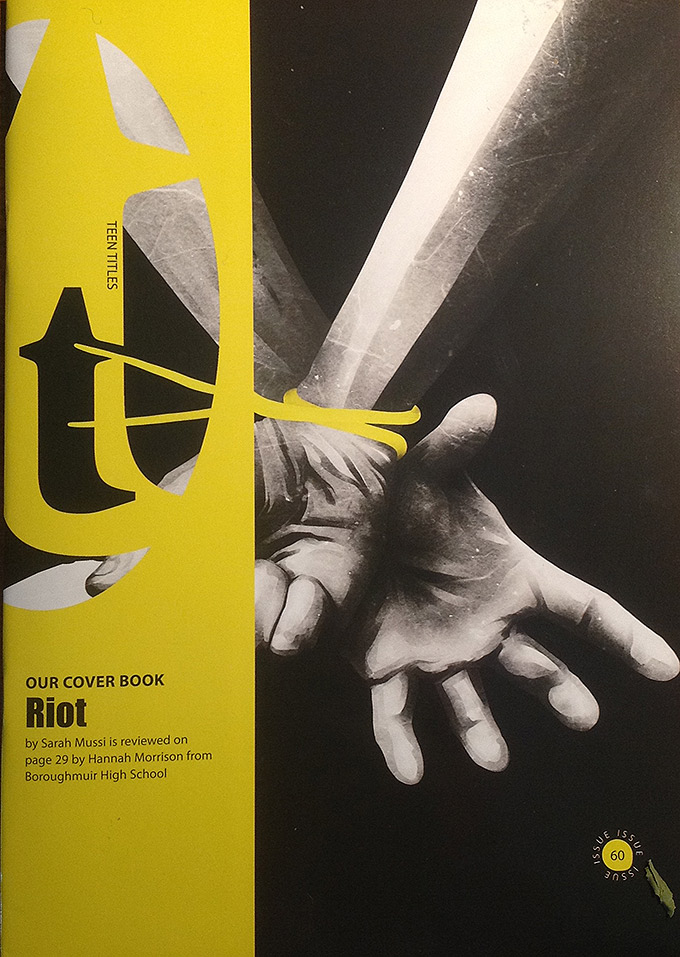 This publication is an absolute must for secondary school libraries. It’s produced by the Information and Learning Resources of Edinburgh Council and subscriptions cost £12 a year for three issues,  with discounts for multiple copies.

In this issue Dan Smit is interviewed about his wartime novel My Broether’s Secret; there are “three best things he said” from a recent Authors Live event appearance by Patrick Ness; a doulbe-page interview feature with Steve Feasey, author of Mutant City; a similar-length interview with Kirkland Ciccone (Conjuring The Infinite);  and some new Author Facrfiles, each with a glossy colour headshot.

To enquire about a subscription phone 0131 3328 or email learning.publication@ea.edin.dch.uk

Vicky Allan, for the Herald, looks back on the children’s and young adult programme of the recently concluded Edinburgh International Book Festival:

The children’s book festival is a testimony to a vibrant sector of the book industry. Earlier this year The Bookseller reported that the pre-school and picture books genre has grown every year since 2001. Janet Smyth, director of the book festival’s children’s programme, says that almost all pre-school events sell out. Smyth believes that is partly "because parents are really quite keen on the whole reading together thing". But also because many of these events feature singing and "make and do". Julia Donaldson has long been reeling in audiences with this kind of show, but almost as big a lure was Kristina Stephenson, author of Sir Charlie Stinky Socks, a writer-illustrator who Smyth describes as "a show-maker who packs them out, and entertains the little ones with singing and dancing".

Sometimes it seems as if the ideal children’s book festival event is some kind of kid-friendly gesamtkunstwerk involving singing, talking, reading, drawing, and possibly glue. James Mayhew, the illustrator in residence, is also a musician who dresses up as Van Gogh. Aidan Moffat, formerly of the band Arab Strap, presented his rhyming tale of The Lavender Blue Dress, while the young audience busied themselves creating a dress design. I can see why words are not enough. My kids get restless after more than a few minutes of just talking. After 10, they’re hunting around inside my handbag for entertainment.

Smyth has also observed that this year more people are moving from different art forms into children’s literature. Since David Walliams became the new Roald Dahl, it seems that many a comedian has turned his or her talent to children’s books. Among those at this year’s Book Festival were Mackenzie Crook, Catherine (Catie) Wilkins and David O’Doherty. The connection works for two reasons. One: they’re often famous, which helps sales. Two: they’re funny. And, as Roald Dahl once said of children’s writing, "It’s got to be funny." 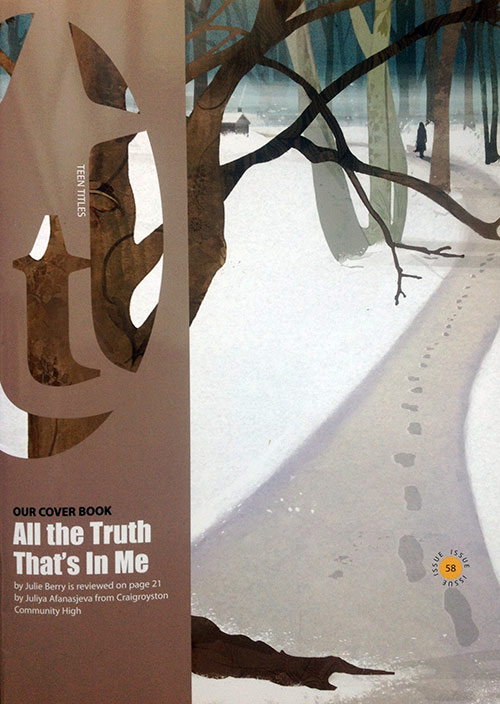 The book jacket design from Julie Berry’s All The Truth That’s In Me makes an eyecatching cover for the latest edition of Teen Titles which was recently mailed out to subscribers.
As well as all the reviews there is are interviews with Holly Bourne, author of Soulmates, with Luisa Plaja, author of Diary of a Mall Girl, and with Matt Carney, writer of the Danny Lansing Adventure series published by Strident.
And seven authors are added to the Author Factifile.
It’s produced in Edinburgh but distributed UK-wide. Every secondary school library in the land should subscribe.

Teen Titles is a hugely popular, glossy, full-colour book review magazine for teenagers, stuffed with reviews written by the teenagers themselves, and published ‘warts and all’ – an honest, unedited, unbiased view of the newest teenage literature, read avidly from cover to cover by teenagers throughout the UK.

For National Poetry Day 2013, the SPL is globetrotting. Join us and two of New Zealand’s finest poets. Celebrated author of poetry, novels and memoir, C.K. Stead has published over 40 books and has as many awards to match. He will be reading from his fifteenth and latest collection, The Yellow Buoy (Arc Publications). Joining him is poet, novelist and tango enthusiast Kapka Kassabova who was born in Bulgaria, began her writing career in New Zealand, and lives in the Scottish Highlands. The name of her last collection? Geography For the Lost (Bloodaxe).

Floris Books, Scotland’s largest children’s publisher, celebrated the 10th anniversary of their Kelpies imprint of Scottish children’s books and launched a ground-breaking new teen list at a private party in Edinburgh on Friday.
The imprint’s authors and illustrators, including award-winning authors Theresa Breslin and Lari Don, gathered to raise a glass to a decade of publishing great Scottish children’s books.

Floris Books acquired the Kelpies list in 2002 from fellow Scottish publisher Canongate but it wasn’t until 2003 that they published their first original Kelpie, The Chaos Clock by Gill Arbuthnott.

The orginal Kelpies list of classic Scottish authors such as George Mackay Brown, Kathleen Fidler and Mollie Hunter have been joined over the last decade by new Scottish writing talent such as Royal Mail Award Winner Lari Don and Amazon bestseller Daniela Sacerdoti.

KelpiesTeen, a new range of quality Scottish fiction for young teens, will be launched early next year with three titles by existing Floris Books authors — Lari Don, author of the First Aid for Fairies series; Roy Gill, author of The Daemon Parallel; and Gill Arbuthnott, author of Dark Spell.

The KelpiesTeen range will be first of its kind specifically for Scottish interest books. Lockwood-Holmes commented:

“Scottish children have grown up with Picture Kelpies and Kelpies, so we’re delighted to be launching KelpiesTeen which will enable those children to keep reading great Scottish authors and stories into their teenage years.”

Submissions are now welcome for the KelpiesTeen list and should include a significant Scottish connection.