You are here: Home / Archives for defat

1984 Hans Christian Andersen winner, Mitsumasa Anno, has died aged 94. He was known especially for wordless pictorial bird’s-eye view “Journey” books, in which a character’s travels embrace a country’s art, literature, culture, and history. His first book, English title Topsy-Turvies – described by Anita Silvey as “an amazing collection of improbable constructions filled with impossible perspectives and angles” – was published in 1968, when he was already in his forties. Before that he had been a primary school teacher. Anno’s Alphabet, published in 1974, received the Boston-Globe Horn Book Award and was specially  commended  for that year’s Kate Greenaway Medal (awarded that year to Pat Hutchins for The Wind Blew). 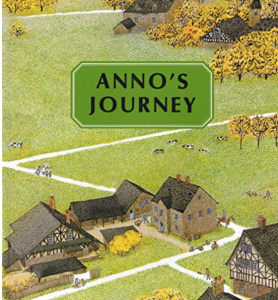 In 1985, Shirley Hughes wrote a profile of him for Books for Keeps, describing the artist as having “about him more than a touch of the genial magician, a flamboyant westernised style combined with the formal politeness of his fellow country-men; he is quick, observant and very, very intelligent.”

Hughes goes on to observe, “He shows a similar brilliant sleight-of-hand with perspective as the artist he is sometimes compared with, M. C. Escher. They both play on the way our eye perceives three-dimensional form on a flat surface. But Anno is the more humanly fanciful and, unlike Escher, works in colour which he uses with stunning fluency. He is not, one senses, particularly drawn to the role of interpreting other people’s texts. Responding very strongly to poetry, he feels (as many writers do) that a good piece of literature needs no further illustration to enhance its meaning. His books explore the converse of this reaction; that a visual medium doesn’t need words to explain the story.”

There is a Mitsumasa Anno Art Museum designed by world-renowned architect, Tadao Andou.