You are here: Home / Archives for David Almond

David Almond, author of Skellig and many other novels, stories and plays, joined us at Word Factory #19 to read his short story The Knife Sharpener. Before the salon started, we asked childrens’ author Lou Kuenzler to interview David for us. We think you’ll love it.

David Almond reads ‘The Knife Sharpener’ from WordFactory on Vimeo.

via The Word Factory » In Interview: David Almond.

Have been a little busy so a little late in linking to the news of this very welcome announcement.

Children’s author David Almond, writer of much-loved children’s novels including Skellig and My Name is Mina, has won the Eleanor Farjeon award for "outstanding contribution to the world of children’s books".

Almond said he was "really moved" to receive an award which he described as coming "from the heart of the children’s book world, a place of great creativity, optimism and endeavour, a world in which people genuinely believe that books and all forms of art can and do change people’s lives". The prize, now in its 47th year, is voted for by members of the Children’s Book Circle, an informal association of children’s book professionals including editors, writers and booksellers.

In the chandelier-hung Aix-en-Provence Room of Bath’s Guildhall there was a good pre-conference buzz as delegates registered for the day. David Almond was chatting with Councillor Neil Butters and a group of Young Curators was on hand in their bright green festival T-shirts. 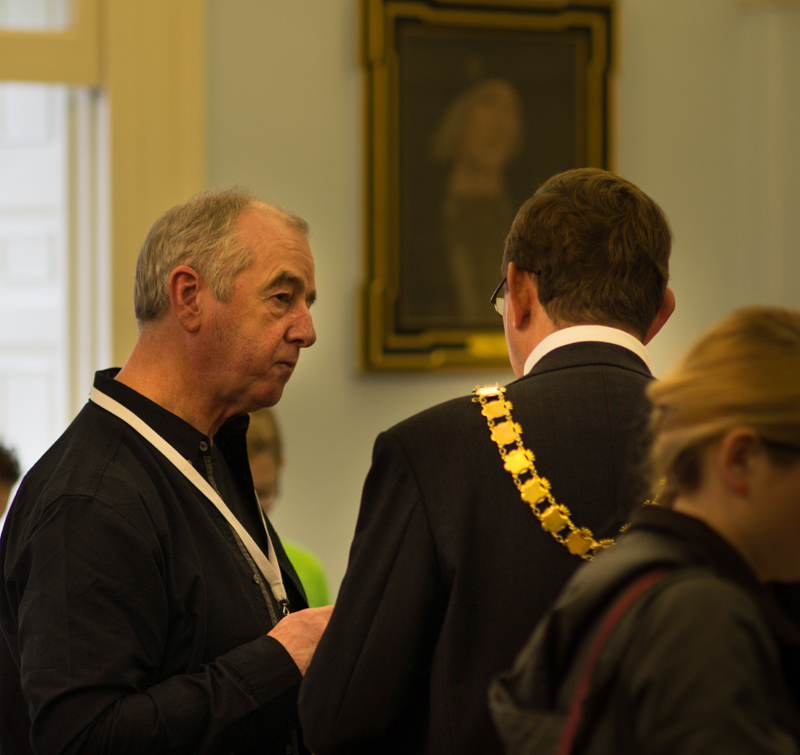 Becky Swain, from Arvon‘s Farringdon office, introduced herself to me, and we were talking about her work for the Foundation when Belinda Kidd, Chief Executive of Bath Festivals, spotting the big camera round my neck, asked if I could take a group shot of Councillor Neil Buttters and the team of student volunteers. 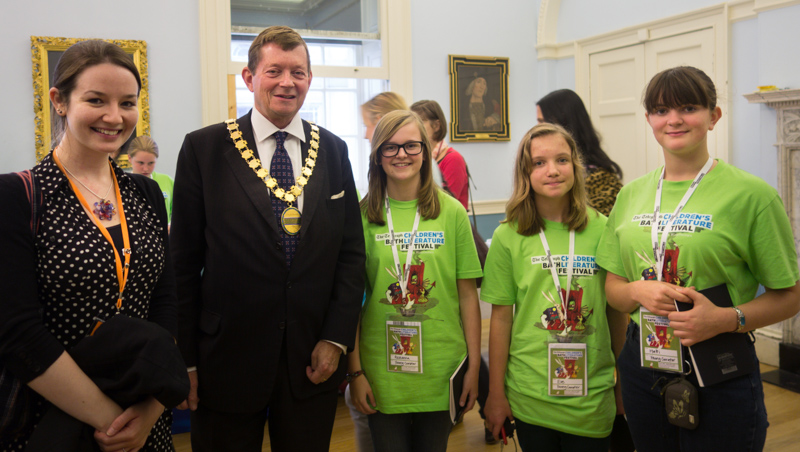 Then it was down to the Brunswick Room (scene of the previous day’s Information Book Award) for the keynote speech by David Almond. 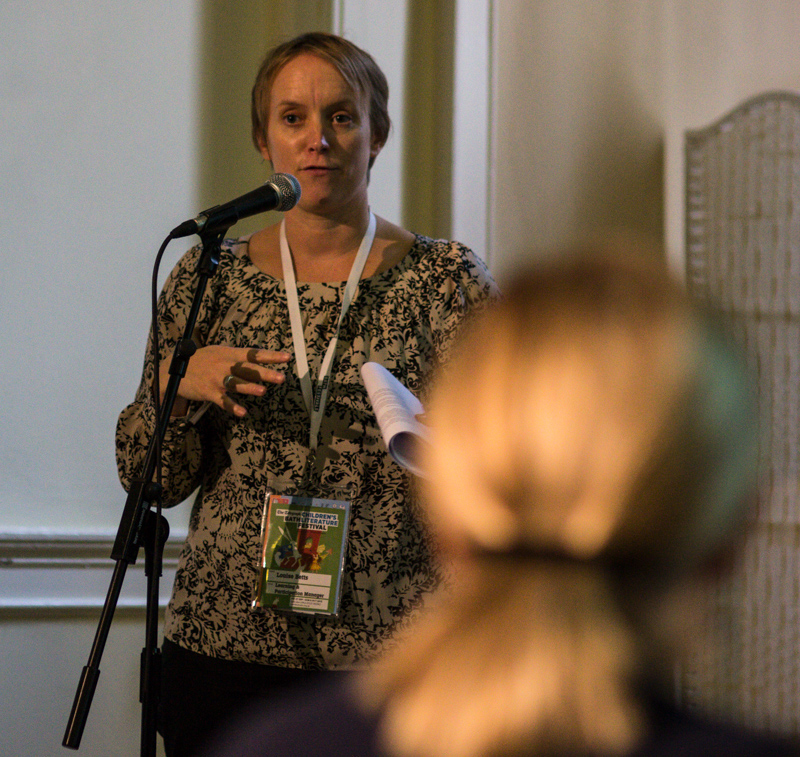 Louise Betts, whose official soubriquet is ‘Learning & Participation Manager’ (who thought that one up?) for Bath Festivals, welcomed everyone and encouraged people to share thoughts about the day on Twitter, Instagram and Flickr. You can filter Twitter for festival-related tweets using the hashtag #bathkidslitconf. 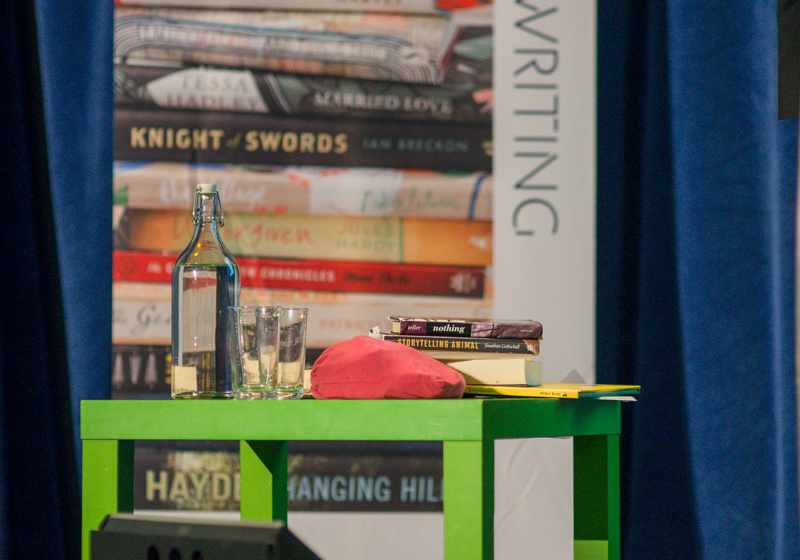 David Almond, dressed mainly in black, brought a small rucksack (also black) on stage, took from it some half a dozen books, which he placed on a low table, and an A4 notebook, which he placed on the metallic lectern. We had spoken briefly the previous evening, at the close of the Information Book Awards, and he had told me he was going home to prepare his speech. 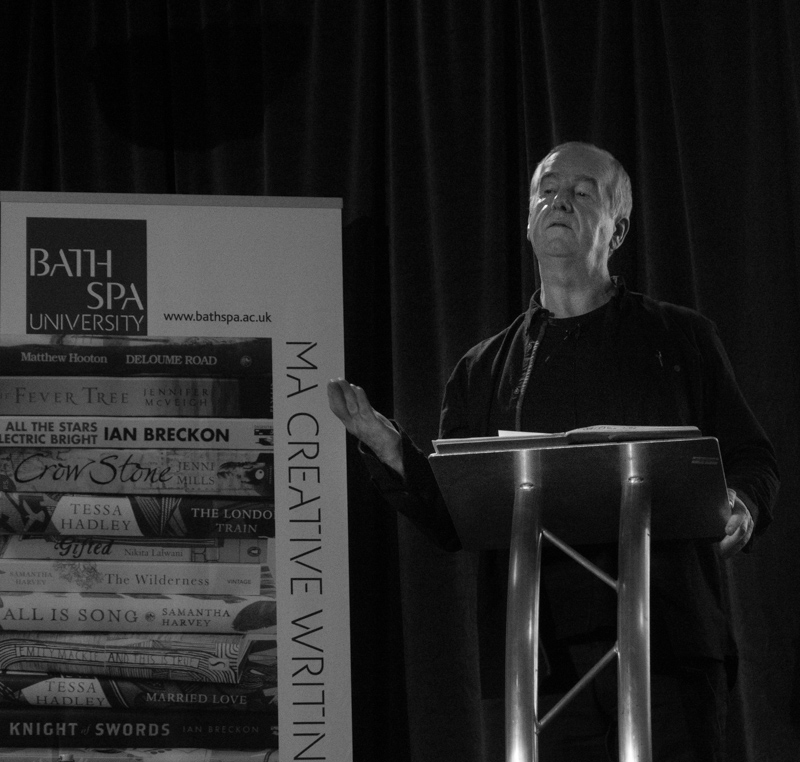 He opened his notebook and there was a flash of handwriting, but whatever notes he had made  or revisited the previous night were used only as prompts and guidance. His theme was creativity and his message that all children are naturally creative. When people ask him, “When did you start writing?” he thinks the question all adults should be asked is “When did you STOP writing?” 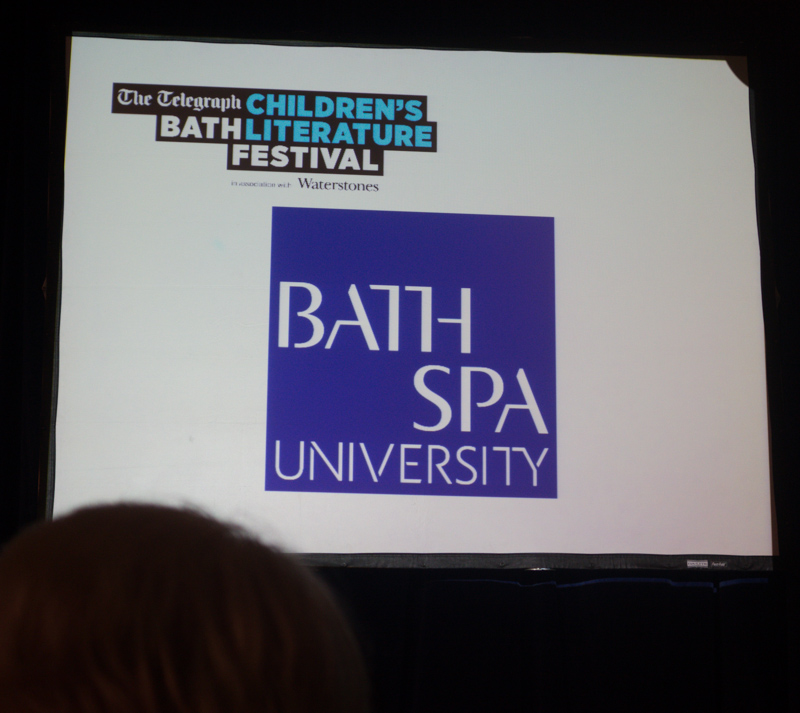 Speaking about Skellig, the debut novel that established him as a uniquely talented fictional voice fifteen years ago (an anniversary edition has just been published)  he said that writing it had been like entering a world – an almost mythic world – that already existed.

He talked about the ‘elemental magic of words’ and the fact that we are ‘wired for stories’.

He cannot abide the negative ‘rubbish’ spouted by newspapers and politicians to denigrate the young people of today. Whenever he goes into schools – and he gave examples of two very different schools, one an independent girls school just outside Bath, the other a challenging school on the outskirts of Newcastle – and asks a group of children who their favourite writers are, hands always go up. Children are reading. Children are writing.

Listening to him speak in that mellifluously entrancing Newcastle accent, I couldn’t help thinking of that different but no less distinctive voice of Seamus Heaney, a voice that is with us no more. So let us enjoy and give thanks for the voice of David Almond, no less poetic, every bit as elemental.

Being Guest Artistic Director of a books festival may be sufficient distraction from his main work as a storyteller, but at some point in the future David Almond must surely and deservedly become our Children’s Laureate.

I stayed on for the pre-lunch break-out session led by Rachel from the Young Poets Network, a web-based programme of writing  ‘challenges’ for those aged 11-25 (but with a special focus on the 13-19 age group). 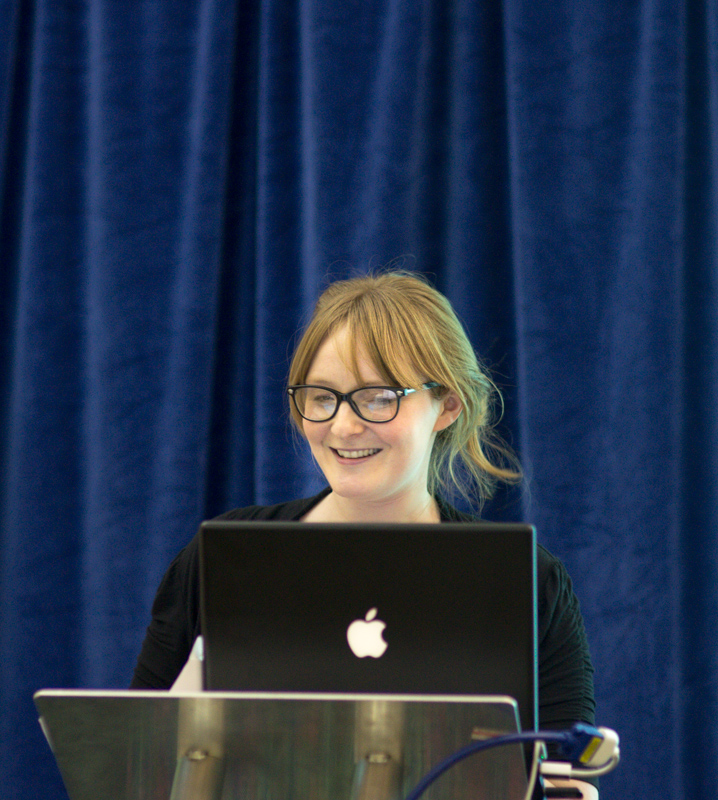 An infectious enthusiast, she talked us though how the challenges are constructed and what the participation levels are like, which are impressive, and largely down, I should imagine to Rachel’s own very active management of the webspace.

As Louise had kindly let me attend the conference with a Press Pass, rather than as an official delegate, I spent the middle part of the day away from the Guildhall.

A good hotel breakfast meant that I could survive on a light lunch of almond croissant & coffee upstairs at Bertinet and a quick meetup with the man behind the 50th Anniversary Edition Mellotronics M3000. The conversation ended up being mainly about how hard it is for creatives (in any field) to make a satisfactory income from their endeavours. It’s always good to have a face-to-face meetup with someone who has been an online friend (in this case via Flickr and the Raspberry Pi Synthesizer blog) for years.

After that is was off to Mr B’s Emporium of Reading Delights. I had been warned that life in the shop was manic, with students back in town and ordering books for their new modules, and that I would need to be unobtrusive. I had replied that I was good at being unobtrusive, and then promptly knocked a pile of books near the till onto the floor with my bag immediately on arrival. I did better at lurking unobtrusively after that – at least I like to think so. I will be presenting a feature about the shop and my visit next week, which will be Number 2 in the series which began with my visit to Newham bookshop.

It’s only now that I look at the detailed breakdown of the day that I see I should have made sure I was back at the Guildhall in time for a plenary session with David Almond, Miranda McKearney and Julia Hall. I’m sorry I missed that. 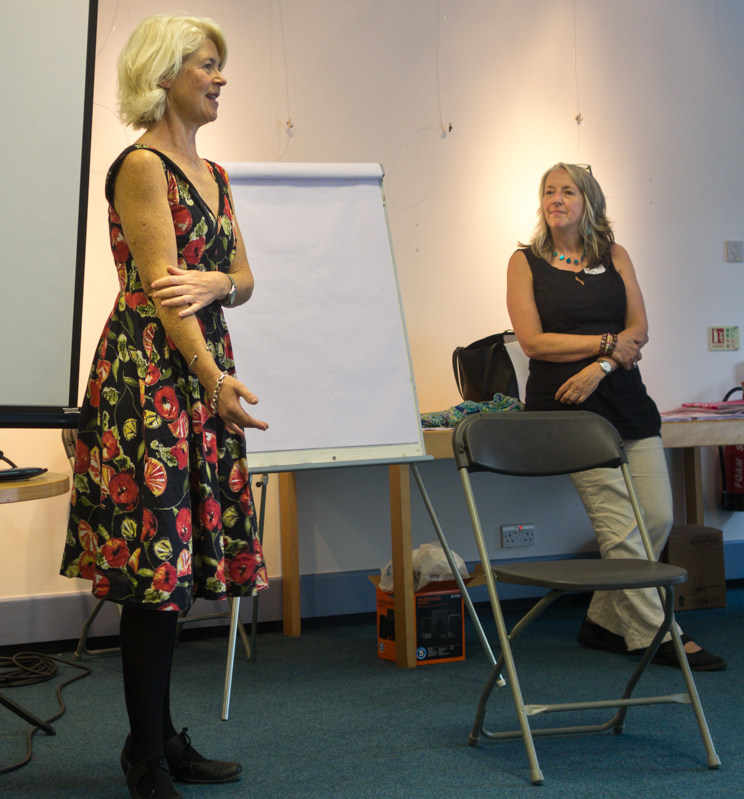 I did get back in time for the final breakout session (held in Bath’s modern central library, which shares an entrance with Waitrose), run by the Bath Festivals Write Team, a poetry-based project that is focused on students who like to keep a low profile and remain invisible. The (at times uncomfortably interactive) session was led by Emma Metcalf, the project co-ordinator, and poet, Mandy Coe.

I showed them my messy notebooks, and we talked about how the apparent perfection of a published book is an illusion, that the book, like all of the best human achievements, like society itself, is the product of an imperfect, dogged, messy, passionate, optimistic process. We talked about the importance of honouring the time you spend on a story or a poem, respecting the language, respecting yourself, not dismissing your work as useless, finding something to like in everything you write, the value of careful editing.

via David Almond: how to let your imagination fly – Telegraph.

The Telegraph Bath Children’s Literature Festival brings together the country’s best writers for children. The 2013 programme has been designed by guest artistic director David Almond, the award-winning author of Skellig.

General booking is now open for the festival, which runs from Friday September 27 to Sunday October 6, and is held at various venues around the city of Bath.

You can book online by visiting bathfestivals.org.uk/childrens-literature, where you can also browse the entire programme. You can book by telephone by calling 01225 463 362 (Monday to Saturday, 9.30am-5.30pm) or visit the box office in person at Bath Box Office, Bath Visitor Information Centre, Abbey Chambers, Abbey Churchyard, Bath BA1 1LY.

Almond/McKean is a double act that’s hard to beat. The third of their graphic novel collaborations, Mouse Bird Snake Wolf is the most beautiful, but perhaps also the most unsettling. (Hats off to Walker, it’s also fabulously produced.) Previous books Slog’s Dad and The Savage, both about the death of a father, are private and raw. Geordie tales, they are not just personal but local too. The writing, in classic David Almond style, is powerfully emotional; the pictures, as always with Dave McKean, brilliantly arresting. They begin with pain and end with consolation. In some ways the new book reverses that. It’s not personal, but universal; not enclosed but spacious. It begins with beauty and wonder and ends with unease.

Millions of children are missing out on the best books in the world because so few are translated into English, according to award-winning children’s author David Almond.

The  Felling-born novelist, whose book Skellig won the Carnegie Medal in 1998 and was made into a film starring Tim Roth, said more needed to be done to bring international best-sellers to this country after figures showed translated fiction accounts for less than 3% of all books sold in the UK.

Almond, who lives in Northumberland, said: “Children need to read the best books by the best writers from all parts of the world. Of course they do.

“But the plain fact is that there is very little translated children’s fiction published in the UK, and our children are missing out.”

He said the launch of a new publishing imprint by Pushkin books which will concentrate solely on international children’s fiction was “a bold new venture”.

via Northumberland author says children are missing out on world of books – Chronicle Live.