You are here: Home / Archives for chapter 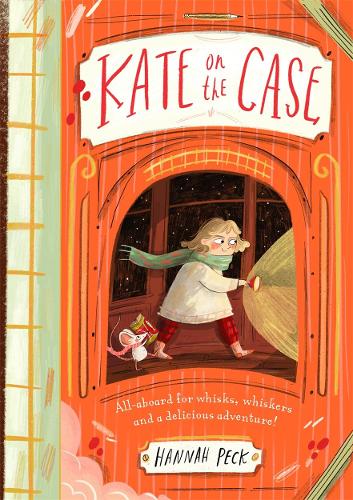 First in a witty two-colour self-authored chapter-book series about a bold young detective and a colourful cast of suspects, in a setting worthy of Agatha Christie.
Hannah Peck was a recent guest on ACHUKA’s weekend Q&A Meet An Illustrator...

Young reporter-in-training Kate and her mouse-accomplice Rupert are on board a train, to visit Kate’s mum in the Arctic. But as soon as the train departs, mysterious things start happening. A packet of ginger nuts goes missing . . . A collection of gymnastics trophies are stolen . . . And some ancient scrolls disappear . . . Fellow passenger Madame Maude seems the most likely culprit, until a surprising – and delicious – twist turns the whole investigation on its head. 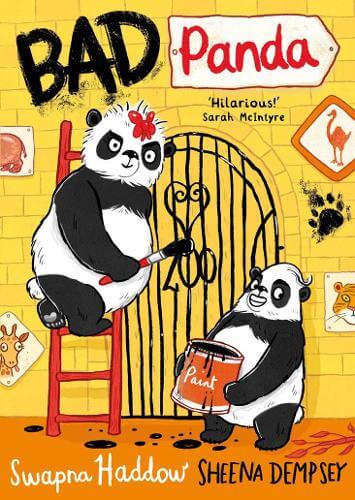 An absolute joy of an illustrated chapter book, which promises to be the ‘first in a series’. ACHUKA can’t wait for more!

Are you sick of being utterly adorable? Tired of being cuddled and hugged? Fed up of having your head confused for your bottom because you just so happen to be SOOOOPER-DOOOOOPER fluffy?

Lin: If you answered yes to any of those questions, then you’re in the right book.

Everyone thinks that Lin is the cutest panda in the world. So much so that they ship her off to the local zoo, away from her beloved brother, to be ogled at by the masses. But Lin HATES being cute, and now she will do everything in her power to prove that she’s the baddest, meanest, most un-cute animal in the zoo. 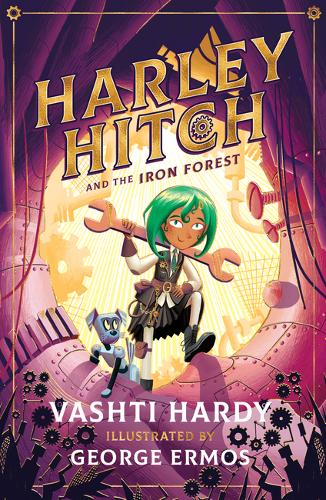 “a joyful mash-up of robots, conservationism and school story” GUARDIAN

First in a new series…
Join Harley, her robot dog Sprocket and best friend Cosmo for problem-solving adventures and mysteries in Inventia, a world where science rules and technology grows in the forest; and where exploding science projects, giant slugs and runaway robots are all part of a normal school day. The Iron Forest near Harley’s home is unlike any other – plants and trees grow cogs and hinges and other mechanical parts – and all of Inventia depends on it. So when a strange fungus is discovered, there’s a race to find a solution. Without essential parts for inventions, the town is quickly falling apart… But just who or what is behind the mysterious infestation? Harley decides it’s up to her to save the day – with chaotic results! 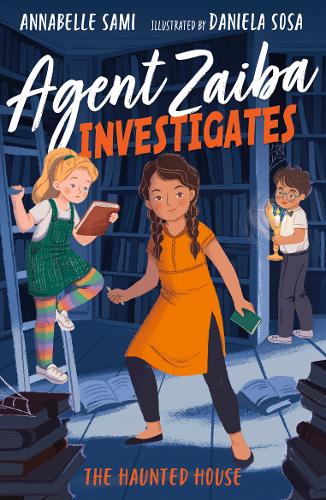 Determined to be the world’s greatest detective, Zaiba is always on the lookout for a crime to solve!
When a new family moves to the village, Zaiba is intrigued to hear about the strange happenings in their home. Things go missing, objects are smashed and unfriendly messages are painted on the walls. There have always been rumours that the house is haunted, but is a ghost really causing all this trouble? Zaiba and her team are convinced that the culprit is very much alive – and won’t stop until they get what they want… 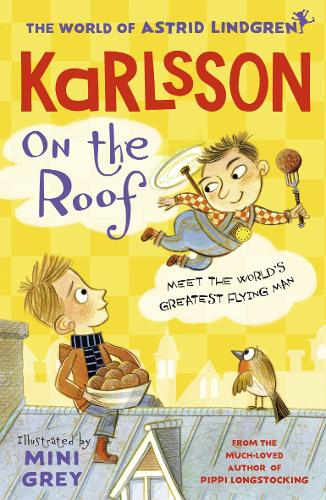 Imagine Smidge’s delight when, one day, a little man with a propeller on his back appears hovering at the window! It’s Karlsson and he lives in a house on the roof. Soon Smidge and Karlsson are sharing all sorts of adventures, from tackling thieves and playing tricks to looping the loop and running across the rooftops. Fun and chaos burst from these charming, classic stories. 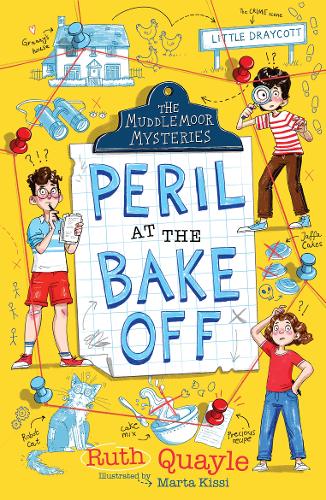 It is the summer holiday and Joe Robinson and his cousins are staying with their granny in Muddlemoor village. The problem is . . . Muddlemoor is a hotspot for crime. When Granny’s precious cake recipe goes missing days before the Great Village Bake Off, Joe, Tom and Pip are FLABBERGASTED. They KNOW that one of the neighbours has stolen it but the question is, WHO? 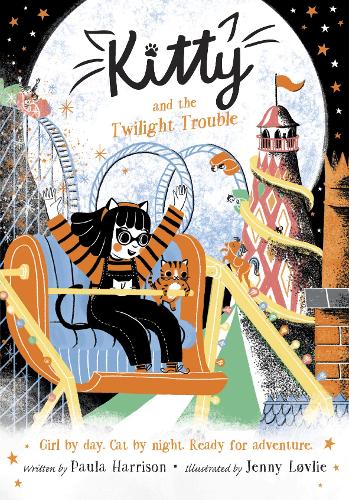 A magical adventure by the light of the moon. Kitty is excited about visiting the funfair with her cat crew. But Pixie has made a new friend and doesn’t want to play with Kitty anymore. She wants to play superheroes with Hazel instead. The problem is, Pixie and Hazel aren’t acting like superheroes, they are acting like supervillains! Before long they both find themselves in trouble at the top of the Big Wheel, and only a true hero like Kitty can save the day . . .

Find out more about Jenny Lovlie: Meet An Illustrator 7 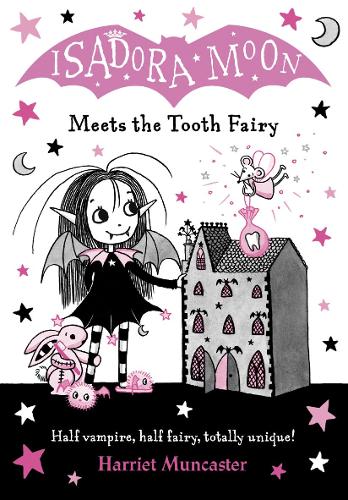 Isadora has a wobbly tooth and her mum and dad are more excited about it than she is! Her vampire dad can’t wait to take her to the vampire dentist and have her special little fang framed. Her mum wants Isadora to leave the tooth under her pillow for the tooth fairy. Isadora isn’t sure what to do until one night, she meets a very special, magical mouse called Mignonette. With Mignonette’s help, Isadora will make her own new tradition.

from Hot Key Books, a free interactive online writing project for KS2 children, for the first time supported by Booktrust. This new Adventure is with award-winning author Jim Eldridge. The second half of his new book THE WRESTLING TROLLS has disappeared and he needs help to rewrite it in just 8 weeks!

Running through to 16 December 2013, Jim will post a new chapter of the book on www.thestoryadventure.com each week and ask children what THEY think should happen next. Not only will they have the chance to influence the story and watch their creativity come alive, but Adventurers whose ideas are chosen by Jim will be credited in the final published book.

Children and schools can sign up as a whole class / library group or join individually.

Alongside the interactive parts of the story there is also a schedule of activities reviewed by primary school teachers that the children can get involved in which fit into the Reading and Writing Curriculum (EN1, EN2 and EN3) including non-fiction, drawing, science, maths and journalistic tasks that will support and further their learning.

Using a secure site hosted on a Ning community platform, www.thestoryadventure.com already has over 400 subscribers following an earlier ‘Story Adventure’  in which 2,000 children helped author Fleur Hitchcock to write the sequel to Sunday Times Children’s Book of the Week SHRUNK! The sequel SHRUNK! MAHEM AND METEORITES will be published in January 2014.

Jim Eldridge says: ‘I’ve been earning my living as a writer for over 40 years, but it all began for me in childhood: reading, and making up little stories of my own. I am absolutely delighted to be doing the next Story Adventure because – who knows – with children helping to create and write the next WRESTLING TROLLS book, some of them may go on to develop ideas of their own and see it in book or story form. The writers of the future are here, now, and they’re doing The Story Adventure. How great is that!’

Hot Key Books Editorial Director Sara O’Connor says: “I’m thrilled to be part of building a community of young readers who think the creation of books is exciting – we already have kids drawing dragons and forests. Jim is the perfect author to carry on Fleur’s creative energy and Booktrust is the perfect partner to support it.”

Alison Keeley, Head of Schools at Booktrust says: “Booktrust is delighted to support a scheme that not only engages children in writing, but gives them a tangible reward in the form of a credit in a published book. Children are natural storytellers and hopefully this will highlight for them the enjoyment in writing. Hot Key Books have shown themselves to be creative innovators and we look forward to working with them.”

Jim Eldridge www.jimeldridge.com has over 250 TV, and 250 BBC Radio 4 scripts to his name. He has had 79 books published which have sold over 3 million copies. His television works include THE GHOST HUNTER, JULIA JEKYLL AND HARRIET HYDE and the Sci-Fi series POWERS amongst many others. His radio work includes the long running BBC Radio 4 series KING STREET JUNIOR and the comedy classic PARSLEY SIDINGS. Jim is particularly concerned with the rising rate of illiteracy, particularly amongst boys.

Hot Key Books, part of Bonnier Publishing, only launched its list last year but their books have already been widely critically reviewed and their third book, MAGGOT MOON by Sally Gardner, won the 2012 Costa Children’s Book Award and 2013 Carnegie Medal.

From The Independent’s Children’s Books Blog, a Q&A with Sophie Smiley, author of a series of chapter books illustrated by Michael Foreman:

Sophie Smiley is the author of a heart-warming series of chapter books about a football-mad family. Packed with charming illustrations by the award-winning Michael Foreman, the books follow the adventures of big sister Charlie (short for Charlton) and her brother Bobby, who has Down’s syndrome. Books in the series include Bobby, Charlton and the Mountain, Man of the Match and Team Trouble.

Sophie recently took part in a cultural exchange between British and Turkish writers before speaking at the London Book Fair, where Turkey was this year’s Market Focus. When she’s not busy working on her novels, Sophie teaches English, Film Studies and Creative Writing. She lives in Cambridge.