You are here: Home / Archives for Brighton Festival 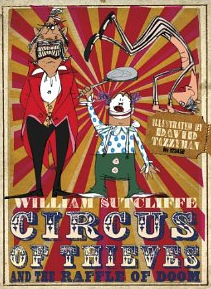 It was announced last week that Circus Of Thieves And The Raffle Of Doom [by William Sutcliffe] has been chosen for this year’s Young City Reads as part of Brighton Festival.

The idea is that one book by one author is chosen for children across the city to creatively engage with, at home and at school, and the project launches officially on March 5 (World Book Day) at Jubilee library.

Circus Of Thieves And The Raffle Of Doom is the first book that William has written for younger children (eight years and up), and the first of a series, the second of which is soon to be published.

The central character in the offbeat adventure is a girl called Hannah, whose life is dull until Armitage Shank’s Impossible Circus comes to town.

William has written five novels for adults, including the international bestseller Are You Experienced?, while his first novel for young adults, The Wall, published in 2013, was shortlisted for the Guardian Fiction Prize.

“I think the eight to 12 age group are the least well-served when it comes to finding something to read, and hopefully this will fill that gap.”

William began writing Circus of Thieves and the Raffle of Doom shortly after the birth of his third child, so didn’t have huge amounts of time to dedicate to it. The first draft was written without too much scrutiny, but then the re-write was more rigorous, he says.

“I have no idea where the story comes from, I think it had been knocking around for a while; sometimes you have an intangible sense of how you want the story to feel.

“The story and characters revealed themselves to me as I wrote.

William explains that he approaches writing projects differently depending on what they are. Because Circus Of Thieves And The Raffle Of Doom is a humorous children’s book he was able to take a more freeform approach, rather than outlining a structure and sticking to it strictly.

“I have spent most of my adult life writing, and in order to keep the process alive for yourself as a writer you can do different things,” says William.

“I do enjoy taking a different approach each time.”

The book is definitely on the border between the real and the surreal, and the characters are brought to life with illustrations by David Tazzyman.

William and David will be in Brighton for a special Young City Reads event on May 20.

William now lives in Edinburgh, with his wife, novelist Maggie O’Farrell, and their three children aged 10, 5 and 2.

via Author's new children's book to be read across the county (From The Argus).