You are here: Home / Archives for bookshop

The etching below is by contemporary artist Peta Bridle and posted on the Spitalfields Life blog on the very day when I shall be visiting the Newham Bookshop in the first of a new series featuring independent bookstores. Newham Bookshop, Barking Rd – “It is a real proper independent bookshop and they are celebrating being open for thirty-five years this year”

James Daunt talks about staff departures and defends the process.

At the end of the piece, in a comment, one of the outgoing store managers, who chose not to participate in the assessment process says this:

As one of the 66 who chose to leave, yes, there were plenty of highly experienced mangers whose departure was a massive shock for Waterstones, but after such a long service, the pay offs were too good to say no to. I left with no malice or hard feeling and had an incredible 15 years there, and am now grateful for the financial opportunity to seek pastures new. James is right, there are a lot of poor managers out there, and the process was indeed as fair as could be. In the short term there will be chaos as too many good people chose to leave, but in the long term it was absolutely the right thing to do. Too many people in and outside the business forget that it is not business as usual – Alexander Mamut bought a bankrupt company and if it is to survive, it has to change, radically.

I’ve just picked up on the news that The Lion & Unicorn children’s bookshop is to close in August! 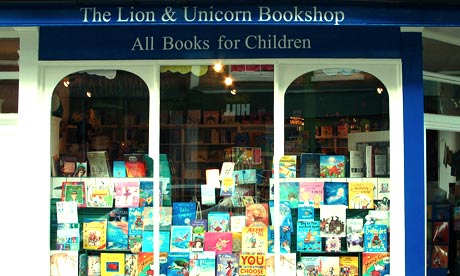 Richmond’s much-loved independent bookshop the Lion & Unicorn, which boasted Roald Dahl as guest of honour at its opening more than 30 years ago, has become the latest victim of rent increases on Britain’s high streets, announcing that it will be shutting up shop in August.

Founded in 1977, the store is one of the only booksellers in the UK devoted solely to children’s books, with its stock ranging from picture books for young children to the latest in teen fiction. The first children’s bookshop ever to win Independent Bookseller of the Year, it has played host to events over the years from authors including Shirley Hughes, Jacqueline Wilson, Philip Pullman and David McKee – plus, at its 1977 opening, Roald Dahl, who had recently published Danny the Champion of the World.

But owner Jenny Morris has now announced that the shop will cease trading, saying that "in recent years our rent has increased to the point where it is now unsustainable. With another rent review due to take place, the decision has been made to terminate our current lease as from August 2013."

via Children's bookshop the Lion & Unicorn is latest independent to close | Books | guardian.co.uk.

Former Dillon’s branch in Leicester to be closed by Waterstones

One of the two Waterstones shops in Leicester is to close with nine people under the threat of redundancy.
The Waterstones in Market Street, Leicester, will cease trading on 1st June, the company’s spokesman Jon Howells has confirmed.
Since Waterstones’ new management came in 2011, several stores have closed in towns or cities where there have been two Waterstones in close proximity to one another.

via Leicester branch of Waterstones to close | The Bookseller.