You are here: Home / Archives for books

What is the future for bookshops? And indeed for books? This is a commonly asked question – and a particularly relevant one for me, since I own a bookshop and I write books. I ask it again this week because I have just read that Stephen King, an ebook pioneer 10 years ago, has released his new novel in physical format only, because he wants to get people back into bookstores rather than online.

via Tom Hodgkinson: ‘The sensible option would be to operate from a warehouse in Swindon’ – Commentators – Voices – The Independent.

when it comes to bookshops versus Amazon, bookshops are in an impossible position. Our staff are knowledgeable, charming and brilliant. The shop is beautiful, and we sell proper cakes and coffee. What happens? People lounge around and chat and browse for a couple of hours, spend £2.50, then buy books online they have researched in our shop.

Why? Because they are so much cheaper. Why are they cheaper? Because in 1997, in a fit of free-market liberalism, we did away with the Net Book Agreement, which had prohibited booksellers from discounting. It was a pleasingly guild-like system, one that is still used today by lawyers, doctors and drugs companies – those professional groups that still look after their own.

One problem in all this is that publishers no longer seem to like books. They think of themselves as groovy Californian libertarian tech-heads. I winced when I read that the chairman of Penguin said that books could change in the future and be filled “with cool stuff”. I think “cool stuff” as a phrase should be banned if you are the head of a venerable English publishing company. [my emphasis]

Publishing CEOs have two main tasks: reducing costs and maximising revenues. Hence, they impoverish their staff and writers. And to do the latter, they lick the bottoms of Amazon, WH Smith and Tesco while ignoring independents. Here is a very depressing quote from the head of Bloomsbury: “Fewer books are being sold through high-street shops as ebook sales are continuing to grow. However, there will be a place for the physical book for many more years albeit mainly sold online.”

For our part, we have tried to inject life into the literary scene by running a non-stop programme of events and courses. These are pretty well attended but the combined sales of books and events barely cover our basic costs. So we feel that we are slaving away, enriching other people. On the upside, our online sales are increasing. That leads us to conclude that the sensible option would be to operate from a warehouse on a Swindon industrial estate rather than a groovy boutique in west London. But where’s the romance in that?

More from man-of-the-moment, Matt Haig, in his final BookTrust blog post, in which he runs though some different ways in which books could be made more popular. I’ve only quoted his final exhortation, so follow the link to get the full post…

– Remember that books aren’t going anywhere. E-books won’t replace books, they will become them (electronic paper is on its way). Your Kindle will look old-fashioned in ten years but a book won’t. Stop worrying. Words and stories and narrative and novels are here to stay. Books are maps. They will remain the best way we have of exploring our imaginations and finding thoughts and emotions buried like treasure inside us. Never, for one moment, dismiss or mock or belittle or doubt the world-shaking human power of a book.

via How to make books more popular | Booktrust.

Have you read any good books in translation recently?
We’re always looking out for titles to recommend on our In Translation picks page…

The Detour by Gerbrand Bakker

Winner of the Independent Foreign Fiction Prize. “A wonderful novel. Wise and generous to a fault of all our human failings and frailties” (Lloyd Jones, author of Mister Pip).

Beginning with this weekend’s Book Expo America in New York at the Jacob Javits Convention Center, THE PENGUIN BOOK TRUCK AND PUSHCART will be making their way to book-related events, festivals, and more, stocked with books from all Penguin Group imprints. Offering readers choices on the go from a wide selection of titles by authors ranging from Patricia Cornwell to John Green, Elizabeth Gilbert to Khaled Hosseini, Nate Silver to Sylvia Day, as well as Penguin Classics. Be on the lookout for the Penguin Book Truck at locations near you!

Inspired by the design of the classic New York City hot dog cart, the Penguin Book Pushcart will be transported by the Penguin Book Truck to various locations including bookstores, parks, beaches, sidewalks in shopping districts, summer theaters, and green markets.

A.T.Williams, A Very British Killing: The Death of Baha Mousa (Jonathan Cape) won the Orwell Book Prize. This chilling, gripping book unearths damning evidence of what happened to Baha Mousa. With a controlled ferocity A.T. Williams details the shameful treatment of Mousa and other Iraqis in Basra in 2003.

There were seven books on the Orwell Prize Book shortlist this year from 210 entries:

The Orwell Prize for Journalism

There were six journalists on the Orwell Prize for Journalism shortlist this year, from a record number of 155 journalism entries:

Zoobean launched [yesterday] to make it easier for parents to find books that are the most relevant for their children.

Zoobean is a curated catalog of children’s books. Every book on the site is recommended by parents and categorized using “common sense” tags. Parents can search for books that explore specific themes, like bullying, the death of a pet, or magic as well as browse by age group, character background, or genre.

Zoobean was founded by a husband-and-wife duo who both built a carer in education. Felix Brandon Lloyd was named a Washington, D.C., Teacher of the Year for 2000-2001. He went on to build and sell a platform called Skill-Life that taught children about financial literary through online games. Jordan Lloyd Bookey is a former teacher who also directed a DC-based nonprofit supporting literacy efforts in low-income neighborhoods and is the outgoing head of Google’s K-12 Education Outreach. 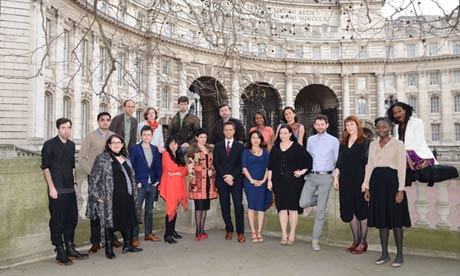 Granta has released its 2013 list of the 20 most promising young British novelists under 40, and for the first time there is a majority of women. It is also an extremely international list: the writers’ backgrounds include China, Nigeria, Ghana, the US, Bangladesh and Pakistan.

Naomi Alderman (born 1974), author of books including The Liars’ Gospel and designer of computer games.

Ned Beauman (1985), who was longlisted for the Man Booker prize for The Teleportation Accident.

Adam Foulds (1974) won the Costa poetry prize for his poem about the Mau Mau uprising in Kenya. His novels include The Quickening Maze, which was shortlisted for the Man Booker.

Xiaolu Guo (1973) was shortlisted for the Orange prize for A Concise Chinese-English Dictionary for Lovers.

Sarah Hall (1974) has won and been shortlisted for many awards for her novels, which include How To Paint a Dead Man.

Steven Hall (1975) has published one novel, The Raw Shark Texts, which won the Somerset Maugham award.

Joanna Kavenna (1973), whose books include Come to the Edge, won the Orange prize for new writing.

Benjamin Markovits (1973) turned from professional basketball playing to writing, including a trilogy on the life of Lord Byron.

Nadifa Mohamed (1981) was born in Somalia and won the Betty Trask award for her debut, Black Mamba Boy.

Helen Oyeyemi (1984) is the author of three novels including White is for Witching.

Ross Raisin (1979) is the author of God’s Own Country, shortlisted for the Guardian first book award, and Waterline.

Sunjeev Sahota (1981) is working on his second novel, The Year of the Runaways.

Taiye Selasi (1979) has just published her debut, Ghana Must Go.

Kamila Shamsie (1973) has written five novels; the most recent, Burnt Shadows, was shortlisted for the Orange prize.

David Szalay (1974) is the author of three novels: London and the South-east, The Innocent and Spring.

Evie Wyld (1980) publishes her second novel, All the Birds, Singing, in June.

as reported by John Harris in The Guardian (worth reading in full):

[Tim Waterstone] is also about to return to bookselling as non-executive chairman of a new venture called Read Petite. This will be launched to the trade at next week’s London Book Fair, and to the public in the autumn. An online outlet for short-form ebooks (fiction and non-fiction), its users will pay a monthly subscription – “a few pounds” – and have unlimited access to texts of around 9,000 words or under.

But this is no literary Spotify, offering hundreds of thousands of items with little quality control: Waterstone is insistent the service will be “curated” to ensure a high standard. Authors will have appeared in traditional print, and have been brought to Read Petite by a publisher. “The individual short story, or whatever it is, may not have been published, but the author will be an established, published writer,” he says, drumming his fingers on the table to emphasis those last three words. “The whole point is to avoid a slush-pile of material. What we’ll guarantee is quality writing.”

Read Petite’s name was inspired by Reet Petite, Jackie Wilson’s 1957 rhythm and blues classic. One of its key players, former Bookseller editor Neill Denny, has come along to further explain what it is all about. The pair are particularly excited about the chance to serialise new fiction à la Charles Dickens, reintroducing readers to the long-forgotten art of the cliffhanger. They enthuse about how e-readers seem to have increased people’s appetite for short-form writing. In the US, the New York Times has reported on a resurgence of the short story, benefiting new and established writers. We talk about such short-story masters as Somerset Maugham, Stephen King and Annie Proulx, and why the publishing industry has never quite managed to market the form.

“A lot of the best short fiction has never been properly exposed, because publishers don’t find it commercially comfortable,” says Waterstone. His bookselling business did have success with Graham Greene’s short stories, but such successes were rare. “Even with a collection, how do you package it? It’s difficult in print: traditionally, money was used up on production and distribution, and not enough was left for promotion. In the digital world, production costs are virtually nil, and distribution costs don’t exist, so you’re left with a much cleaner sheet.”