You are here: Home / Archives for adult 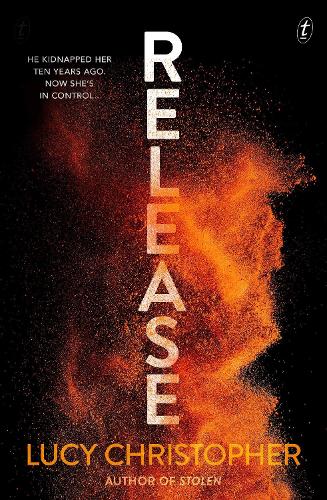 This book is published for adults (by Australian indie publisher, Text) but is a sequel to the author’s YA novel Stolen and, as such, can be recommended for readers of that earlier book, and indeed to any YA readers who routinely mix the reading of adult and YA fiction.

Ten years ago (as told in the book Stolen) sixteen-year-old Gemma Toombs was kidnapped from Bangkok Airport by an infatuated drifter, Tyler MacFarlane, who took her to a secret den in the Australian desert. Now her name is Kate Stone and it’s her turn to confront Ty and try to find answers to the questions that have obsessed her since her ordeal. What is the legacy of this coercive relationship? Who holds the cards now? In the confusion of past and present, will Kate remain trapped in a deranged dance of desire and revenge? Or will she regain control and find release?

Both a courtroom drama and a road trip in the searing heat of the West Australian desert, Release is the story of two people confronting each other, each intent on destruction and survival. Michael Rosen welcomed the new books, saying: ‘We all love parodies and there is an extra frisson if it’s children’s stuff because there is something naughty about it.’

However, he cautioned: ‘It is a bit tricky because it blurs the lines between children’s lit and adult lit and people get nervous that children will get their hands on them.’

Bestselling author Joanna Trollope said she feared the series is simply ‘cashing in on the commercial success of the Ladybird books.

‘The Ladybird books are subtly clever and witty because they use the original illustrations. This sounds to me a bit laboured, a bit pretentious and a bit facetious.’

Finally, a sexy way to learn your ABCs!

A Bedford-Stuyvesant writer has penned a sneakily subversive children’s book that teaches kids the alphabet with dirty double-entendres. But the author of “P is for Pussy” says that the double-meanings are totally lost on the innocent — or at least, they should be.

“If your children know all these sex and drug references, you have a bigger problem,” said Elissa Blount-Moorhead, who will celebrate the launch of her picture book at Dumbo’s Powerhouse Arena on Feb. 29.

The book pairs potentially dirty words with innocent illustrations, such as “A is for ass” — accompanied by an image of a donkey — and “C is for cock,” depicting a guy holding a rooster.

She dreamt up the idea while trying to keep her youngsters — and herself — entertained during a long road trip, and started spouting off a naughty but kid-friendly alternative alphabet to mix up the ho-hum “A is for apple.”

The former Pratt professor and mother of two, who splits her time between Brooklyn and Baltimore, decided the current kids’ book market could use more low-key adult humor to keep parents laughing while putting the little ones to bed.

AL Kennedy has revealed that she likes to read a children’s book before starting work on her novels:

“Reading children’s stories is a very pure, direct incarnation of story so it’s very inspiring. I will read a children’s story before I start a novel just to remember that’s what it’s about.”

via AL Kennedy: I get my inspiration from children’s books | Herald Scotland.

I can’t believe I missed this opinion piece by Jonathan Myer (of City University) in the middle of last week, in the wake of the Kent University controversy. The whole piece is more muddled than this extract suggests and I have the distinct impression that Myerson is not widely read in in contemporary YA fiction, especially that which is aimed at the 12-17 audience rather than the 11-13 age range to which he refers.

When I was a “young adult”, YA fiction didn’t exist and I filled my hours with Robert Louis Stevenson or Isaac Asimov. These novels held and excited us because they created scenarios where good and evil were clearly defined and rarely muddied.

I am so glad that first-rate children’s literature was there for my own children. I would not have wanted them – at 11, 12 or 13 – to confront the complexity and banality of evil. It’s quite right that they wanted to read about worlds where evil was uniformly evil and good people were constantly good. In contrast, adulthood means learning that SS officers or drone pilots do go home and kiss their wives, without a thought of belonging to the “dark side”. Equally, while you come to know how to interpret Portnoy’s self-loathing or Humbert Humbert’s witty detachment, children wouldn’t enjoy these characters or their dilemmas. The best young adult novels do bridge that sticky chasm between the undoubting days of childhood and the hedged decades of adulthood.

But there’s no avoiding the real question. Are adult novels larger than children’s novels largely because they seek to confront all these issues? Of course they are

via Children’s fiction is not great literature | Jonathan Myerson | Comment is free | theguardian.com.

from the Kill Your Darlings blog

When I talk to adults about children…the adults often make the mistake of assuming that because children are physically smaller, that everything that goes on in their inner worlds is conventionally smaller. And of course, those who remember being 7 or 9 or 12, remember that our feelings and our hopes and dreams and thoughts are as huge at that age as they are at any stage later in life.’

via The adult vs children’s lit debate: An interview with Morris Gleitzman | Kill Your Darlings.

The Guardian’s book doctor, Julia Eccleshare, has a go at answering the question “Why do teens like dystopian fiction so much?”

Typically, the destruction wipes out “good” adult rulers; children step into the breach. Its not a new fictional phenomenon. Earlier examples include Robert Swindells Brother in Land, a classic title of the 1980s reflecting then current concerns about the possibility of a nuclear bomb being dropped, in which a group of children have to manage on their own after the adults have been destroyed and Marcus Sedgwicks Floodland, published at the turn of the millennium, in which, having seen her parents sail away to safety, a young girl has to navigate Eel Island and its inhabitants if she is to survive when the east of England is subsumed by flood water. In both, and in the many dystopian novels of today, an apparently bleak world is re-imagined and lit up by children who understand clearly what is worth saving as they step from childhood to adulthood. Frequently, family is let go while friendship or trust in others becomes the future foundation. Navigating that space is what all adolescents need to do which is why they like this kind of fiction so much.

via Book Doctor: Why do teens like dystopian fiction so much? | Childrens books | guardian.co.uk.

British author Sophie McKenzie’s latest novel Close My Eyes is a significant departure from the fiction her younger fans have come to know, but perfect to keep you awake all night. In her exclusive interview with TheReadingRoom.com, McKenzie reveals why the change.
Her previous books for children and young adults, include Girl, Missing and Sister, Missing. She has won numerous awards, including being twice long listed for the prestigious Carnegie Medal.
Close My Eyes is a psychological thriller for adults, perfect for readers who love a spine chilling read.

via Bestselling Children’s Author Sophie McKenzie Talks to TheReadingRoom.com About her New Novel for Adults.