You are here: Home / Archives for acquisitions

HarperCollins has announced that it will publish two new books by Veronica Roth, bestselling YA author of the Divergent series and the Carve the Mark duology…

First up… will be a collection of short stories, titled The End and Other Beginnings: Stories from the Future, which take place in future worlds that feature advanced technology.

The End and Other Beginnings: Stories from the Future is slated for publication in fall 2019; Roth’s untitled YA novel is anticipated in 2021.

HarperCollins Children’s Books has announced the publication The World Worst Children 2, a new collection from David Walliams. With illustrations  by Tony Ross, it will publish in hardback on 25th May 2017.

David’s release of his first volume, The World’s Worst Children,  held the industry No.1 slot for three weeks, and the children’s-chart No.1 slot for ten weeks. Success continued throughout 2016 with the book staying 29 weeks in the Children’s Top Ten and exceeding sales of over 500,000 in the UK alone.

David Walliams says, “I wrote the first collection of short stories with the reluctant reader in mind. I wanted to create a book that would be very friendly for children whatever their reading ability, full of surreal humour and colourful illustrations from the great Tony Ross. This new book has all new characters and stories and I am thrilled to be unleashing these horrible children on the world.”

Sally Nicholls has joined the Andersen Press list with a suffragette-based YA novel Things a Bright Girl Can Do, set for release in hardback in September 2017. This is the first in a two-book deal signed by Charlie Sheppard, Publishing Director at Andersen Press, negotiated with Jodie Hodges at United Agents. Andersen Press hold world rights.

According to the publisheer, Things a Bright Girl Can Do follows three courageous young women as they join the fight for the vote, through rallies and marches, in polite drawing rooms and freezing prison cells and the poverty-stricken slums of the East End.

Evelyn is seventeen, and though she is rich and clever, she may never be allowed to follow her older brother to university. Enraged that she is expected to marry her childhood sweetheart rather than be educated, she joins the Suffragettes, and vows to pay the ultimate price for women’s freedom.

May is fifteen, and already sworn to the cause, though she and her fellow Suffragists refuse violence. When she meets Nell, a girl who’s grown up in hardship, she sees a kindred spirit. Together and in love, the two girls start to dream of a world where all kinds of women have their place.

Released just before the centenary of the 1918 Representation of the People Act, which finally allowed women to vote, Things a Bright Girl Can Do comes as our own political landscape is in turmoil, and the protests of those under-represented and marginalised are headline news.

Charlie Sheppard, Publishing Director at Andersen, describes the history behind the book, and signing Sally to the fiction list:

“I have been looking for a book with suffragettes at its heart since 2013, when the Jockey Club did not give Emily Wilding Davison a minute’s of silence to mark the centenary of the fateful day at Epsom Derby when she threw herself under the King’s Horse.

I wanted to publish a book about suffragettes that would reach young people. We commissioned Sally Nicholls, whose writing I have admired for a very long time, to write one for us and the result is stunning and its publication will be a celebration of and testament to the young women of the past who sacrificed so much for us. What they did must never be forgotten or taken for granted.”

Author, Sally Nicholls added, “It’s been a privilege to work on this book, to learn about early feminists and to compare their experiences to the battles still being fought by women today. With all that’s happened in the last year, it feels like such an important story for young readers to hear. Their fight must never be forgotten.”

Things a Bright Girl Can Do will be released September 2017, hardback £12.99
http://www.andersenpress.co.uk/

Hodder Children’s Books, an imprint of the Hachette, has announced the acquisition of Bake Me a Story, a baking book for families, from Great British Bake Off 2015 winner Nadiya Hussain.

The 160pp book will be a fully-illustrated hardback gift book with step-by-step recipes and a mix of original and traditional children’s stories. Publication is scheduled for September 2016. 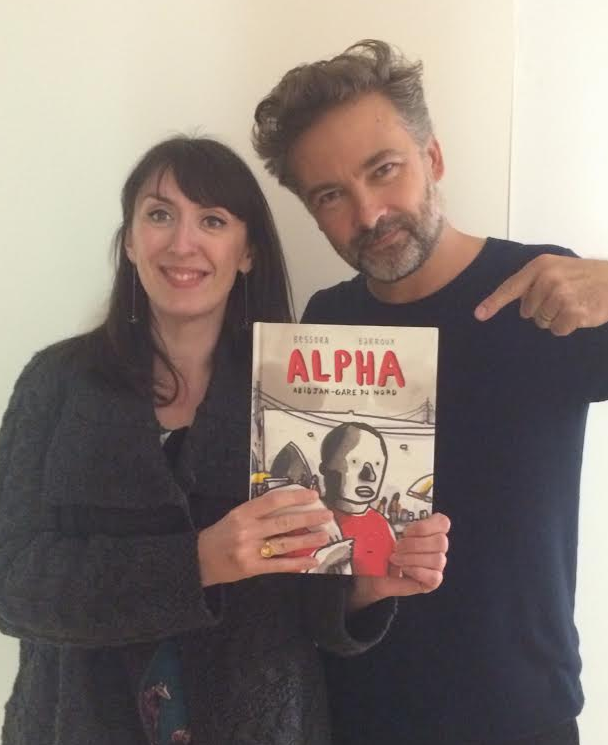 Barroux and Mairi Kidd, MD of Barrington Stoke, with the original French edition of ‘Alpha’

from the publisher’s Press Release

Barrington Stoke is delighted to have acquired English language rights in ‘Alpha’, a graphic novel created by ‘Line of Fire’ illustrator Barroux, in collaboration with prize-winning novelist Bessora. ‘Alpha’ follows its eponymous hero on a long and dangerous journey from Africa to Europe as he seeks to be reunited with his family.

Barrington Stoke will partner with Amnesty International UK on ‘Alpha’ and an associated education programme. Nicky Parker, Publisher of Amnesty International UK says, ‘It’s with huge sensitivity that Barroux shows the horrors of life as a refugee, his drawings providing a moving insight into this kind of journey. Alpha is emblematic of the refugee crisis today – he is one of millions on the move, some fleeing war and others in desperate hope of a better life for their families. He, like so many, is willing to face a journey full of dangers rather than stay in a place without a future. Alpha shows the human condition at a time of extreme stress and Amnesty International UK is proud to partner on it.’

”Alpha’ counters the dehumanising discourse around refugees that shows no signs of letting up,’ says Barrington Stoke MD Mairi Kidd. ‘With pared-back text and powerful imagery, it has serious impact and is a perfect example of the power of graphic novels to speak to a wide readership of adults and teenagers. We are delighted to publish this book and believe it could not be more timely.’

To increase the story’s resonance, Barroux created the art in materials that Alpha might be able to access – felt markers and water – and drew in a bound book as though in a visual diary. This gives the work an stunning immediacy and power.

‘Alpha’ will publish in summer 2016 in simultaneous hardcover and enhanced paperback format, with English translation by Sarah Ardizzone, in a new imprint. An exhibition of Barroux’s original artwork and a series of related events is planned for the Edinburgh festival 2016.

Buzz around the book has begun early with translator Sarah Ardizzone running a series of ‘Amazing Translation Machine’ events at the South Kensington Children’s Festival on Thursday 19 and Friday 20 November, during which members of the public are invited to create their own translations of ‘Alpha’. Barroux will also be at the Festival on Saturday 21 November.

Sneak peaks from the rough proofs: 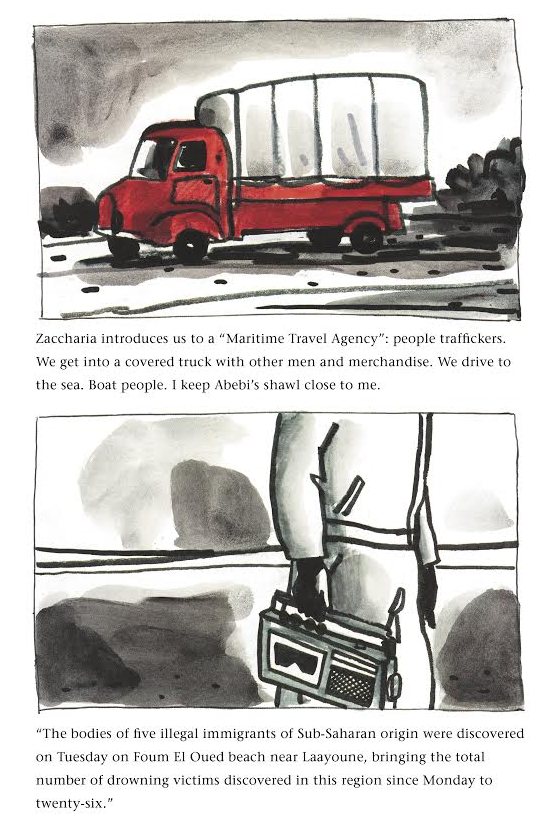 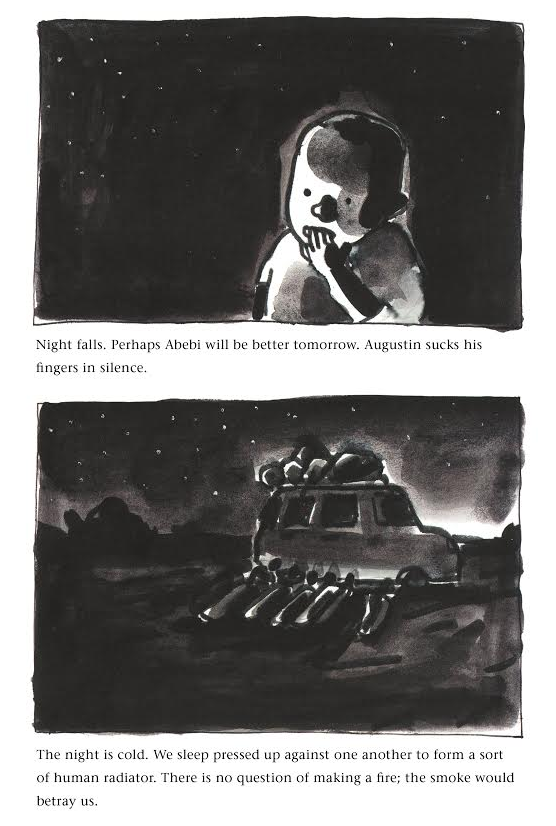 Usborne has acquired two middle-grade novels by Lara Williamson and will publish the first, The Boy Who Was Ace, in autumn 2016.

Usborne also published Williamson’s first two books: A Boy Called Hope and The Boy Who Sailed the Ocean in an Armchair, which is currently Waterstones’ Children’s Book of the Month.

via Usborne acquires two novels from Williamson | The Bookseller.

Andersen Press have announced the acquisition of a new picture book from Dan Ungureanu, just awarded the Student Runner-Up prize at the V&A Illustration Awards.

Nara and the Island, the book based on his award-winning artwork, will be published in Spring 2016.

All of the winning art works are on display at the V&A Museum until 2nd August 2015.
Dan is a recent graduate of Cambridge School of Art’s MA in Children’s Book Illustration, and has already been Highly Commended in the prestigious Macmillan Prize for Children’s Picture Book Illustration 2014.

Libby Hamilton, Editorial Director for Picture Books at Andersen Press, who acquired world rights to Dan Ungureanu’s author-illustrator debut says: “I fell in love with the same piece that has won Dan his V&A award, and when I discovered his lyrical storytelling, I was hooked. We are very excited to be fostering such an exceptional new talent in the world of picture books.”

Hodder Children’s Books is delighted to announce the acquisition of two children’s books by number one bestselling author for adults, Sheila O’Flanagan. With her adult books published by Headline Publishing Group it feels perfect that her children’s books should also be published within the Hachette UK group. Acquired jointly by Anne McNeil, Publishing Director and Jon Appleton, Editorial Director, the first book, The Runner, will be published in hardback in Spring 2016 and will be the first brand new acquisition to the Hodder Silver list.
Anne McNeil and Jon Appleton have acquired UK & Commonwealth Rights (inc Ireland, ex Canada) from Carole Blake of The Blake Friedmann Literary Agency for this two book deal for readers aged 10+. The books will be edited by Jon Appleton.