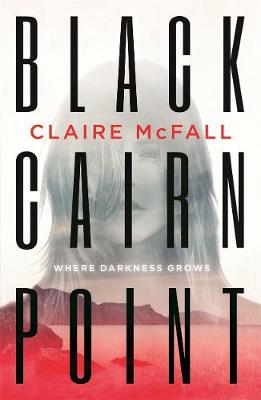 The author will receive £3,000 and the two runners-upwill £500 each. The new prize was set up to celebrate the most popular teen books by Scottish authors, and is run by Scottish Book Trust with support from Creative Scotland.

Black Cairn Point, set in Dumfries and Galloway and published by Hot Key Books, is described as “a chilling and atmospheric thriller which explores what happens when an ancient malevolent spirit is reawakened”.

Claire received news of her Scottish Teenage Book Prize win from vlogger Claire Forrester aka The Book Fox at The Edinburgh Book Shop in Bruntsfield and the announcement video is available on the Scottish Book Trust’s website. [see link at the bottom of this post]

“I’m over the moon that Black Cairn Point has been voted the winner of the first Scottish Teenage Book Prize,” Claire said. “It’s a brilliant award that encourages young people around Scotland to read books about and from their country and their culture. But it also encourages them to get involved by taking part in the competitions for readers that run alongside. Silver Skin and The Last Soldier are both terrific books, so to know that readers chose my novel is an enormous compliment. This is why I write.”

Claire is a writer and English teacher who lives in Clovenfords in the Scottish Borders. Her first book, Ferryman, was a love story which retold the ancient Greek myth of Charon, the ferryman of Hades who transported souls to the underworld. The novel won the Older Readers Category of the Scottish Children’s Book Awards 2013; was long-listed for the UKLA (UK Literary Association) Book Awards and long-listed for the Branford Boase Award; and nominated for the Carnegie Medal. The sequel to the Ferryman is due to be released in September.

Aspiring young film makers were also asked to get involved with The Scottish Teenage Book Prize 2017 by creating their own book trailer for one of the shortlisted titles or entering a graphic novel to create a comic strip adaption of a scene from one of the books. Scottish Book Trust provides extensive learning resources for teachers and librarians on how to create book trailers and how to make the most of using comics in the classroom.

St Joseph’s Academy in Kilmarnock is the winner of the Book Trailer Competition. Their trailer will be featured on Scottish Book Trust website and they will receive a £250 Waterstones voucher to help stock their school library.