You are here: Home / YA / Right Where I Left You by Julian Winters 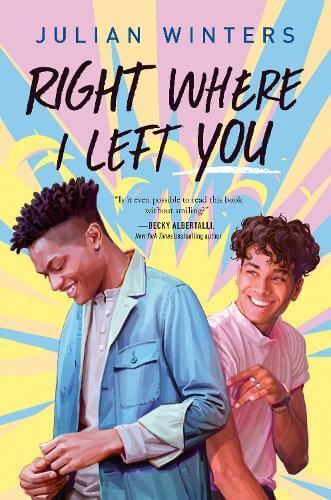 “Some books are downright fun, and “Right Where I Left You” is one. The story is filled with all the gushy stuff that makes for a great romance, even as it delicately reflects the anxiety that can accompany the idea of going to college and leaving old friends. But there’s another layer beneath that — Winters sends a quiet but important message that queer Black and brown kids deserve to live happily ever after too.” New York Times
“An enthusiastically queer story of friendship, family, and romance and the ways they empower one another.” KIRKUS

School’s out, senior year is over, and Isaac Martin is ready to kick off summer. His last before heading off to college in the fall where he won’t have his best friend, Diego. Where—despite his social anxiety—he’ll be left to make friends on his own. Knowing his time with Diego is limited, Isaac enacts a foolproof plan: snatch up a pair of badges for the epic comic convention, Legends Con, and attend his first ever Teen Pride. Just him and Diego. The way it should be. But when an unexpected run-in with Davi–Isaac’s old crush–distracts him the day tickets go on sale, suddenly he’s two badges short of a perfect summer. Even worse, now he’s left making it up to Diego by hanging with him and his gamer buddies. Decidedly NOT part of the original plan. It’s not all bad, though. Some of Diego’s friends turn out to be pretty cool, and when things with Davi start heating up, Isaac is almost able to forget about his Legends Con blunder. Almost. Because then Diego finds out what really happened that day with Davi, and their friendship lands on thin ice. Isaac assumes he’s upset about missing the convention, but could Diego have other reasons for avoiding Isaac?