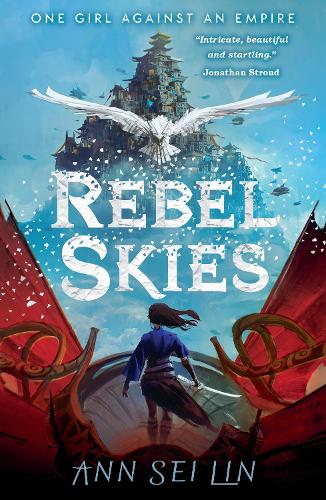 Kurara has never known any other life than being a servant on board the Midori, but when her party trick of making paper come to life turns out to be a power treasured across the empire, she joins a skyship and its motley crew to become a Crafter. Taught by the gruff but wise Himura, Kurara learns to hunt shikigami – wild paper spirits who are sought after by the Princess. But are these creatures just powerful slaves, or are they beings with their own souls? And can a teenage girl be the one to help them find their voice – and change the course of an empire?

The author told The Bookseller, at the time the publication deal for trilogy was announced: ““What fascinates me most about paper is the idea of possibility. Paper can fold into any shape. It can be a canvas for any painting, or the pages of any story. Like many young people, Kurara is a character who must carve her own place in a world full of terror and possibility. I couldn’t ask for a better home for this novel than with Walker Books and I’m beyond thrilled to be working with Gráinne [Clear] to bring Rebel Skies to the world.”

Interesting fact about Ann Sei Lin: “My dad is blind but he loves books and listens to them via screen reader. Growing up, the sound of electronic voices was a constant background presence. Instead of doing my homework, I would often listen to whatever story my dad’s computer was reading to him at the time. Some people say that they can’t get used to how unnatural screen readers sound, but listening to one is now an important step in my editing.”