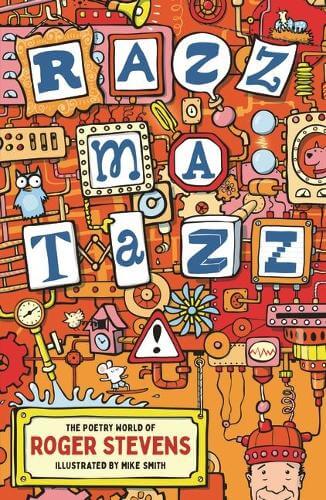 It’s good to kick off a new year of Book of the Day selections with this 100+ page collected poems by Roger Stevens from Otter-Barry Books. The book collects poems from Stevens’ four solo collections previously published by Macmillan and some others included in anthologies, with the addition of one new poem.

With themes including Family, School, Pets, the Wild, Being a Poet and Personal Favourites, this is a self-selected collection of Stevens’ best work. I particularly enjoyed the poet’s italicised annotations at the foot of some of the poems. As he says in the collection’s witty introduction, “Just like I do when I’m performing, I often tell you something about the poem; maybe how I came to write it, or how you could perform it.”

Children will also be amused by Mike Smith‘s illustrations. A short four-line poem about a ‘distant cousin’ is accompanied by a drawing of a child on a doorstep peering through binoculars with a thought-bubble, “We used to be so close!”

Roger was recently asked a host of questions by fellow poets on PoetryZone.