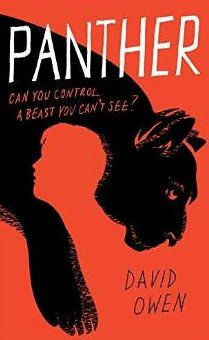 This is an extraordinarily powerful and emotionally raw debut novel. Very highly recommended.
It’s a story about how the main character, Derrick, feels his own mental stability unhinging under the cumulative impact of his sister’s suicidal depression.
Even at the start of the book all is not well. He is dangerously overweight (18 stone) and scavenging in bins to feed his hunger for comfort food.
As the book develops, things get progressively worse.
Owen is brilliant at conveying Derrick’s sense of betrayal when his best friend makes out with the girl (a longtime family acquaintance) he had always hoped would be his alone.
The panther of the title refers to a large black cat, stalked by Derrick in the allotments near to his house. This hunting ground becomes the arena for confrontations as powerfully charged as scenes in the work of Robert Cormier, Kevin Brooks and David Almond. (I don’t make such comparisons lightly.)
The sister, Charlotte, is central to the work but never centre stage. The novel is intense, but not overbearingly claustrophobic. Derrick’s perverse sense of humour provides a certain levity even in the darkest moments. And make no mistake, the book _is_ very dark.
The only thing preventing me from giving it 5 stars is its opening paragraph, which very nearly made me put the book aside (such is the number of books that bid for my attention). “The cookie broke apart in his mouth like smashed concrete.” Not only does this not work as a stand-alone simile, but it becomes irrational in the following sentence. “It was so stale that his saliva turned it into glue and his teeth stuck together.” What kind of saliva does the boy have, for goodness sake, that it is capable of turning concrete into glue?
There are occasional instances where words jammed against my ear (the repetition of the word ‘cut’ three times in six lines across the bottom of p132 and the top of p133) but otherwise this is a very well-written, well-structured novel, and I hope it gets the reception and recognition it deserves.