I had walked from Elephant & Castle underground station, and stopped off at a street-corner pub for a quick Guinness before the Nosy Crow Christmas party. Who should I come upon while searching the back streets for the Lant Street venue but the vividly unmistakable creative duo behind Oliver & The Seawigs, consisting of the ever suave Philip Reeeve and a majestically blue-wigged Sarah McIntyre – neither of whom, it has to be said, recognised me from my darkly-lit Twitter avatar. 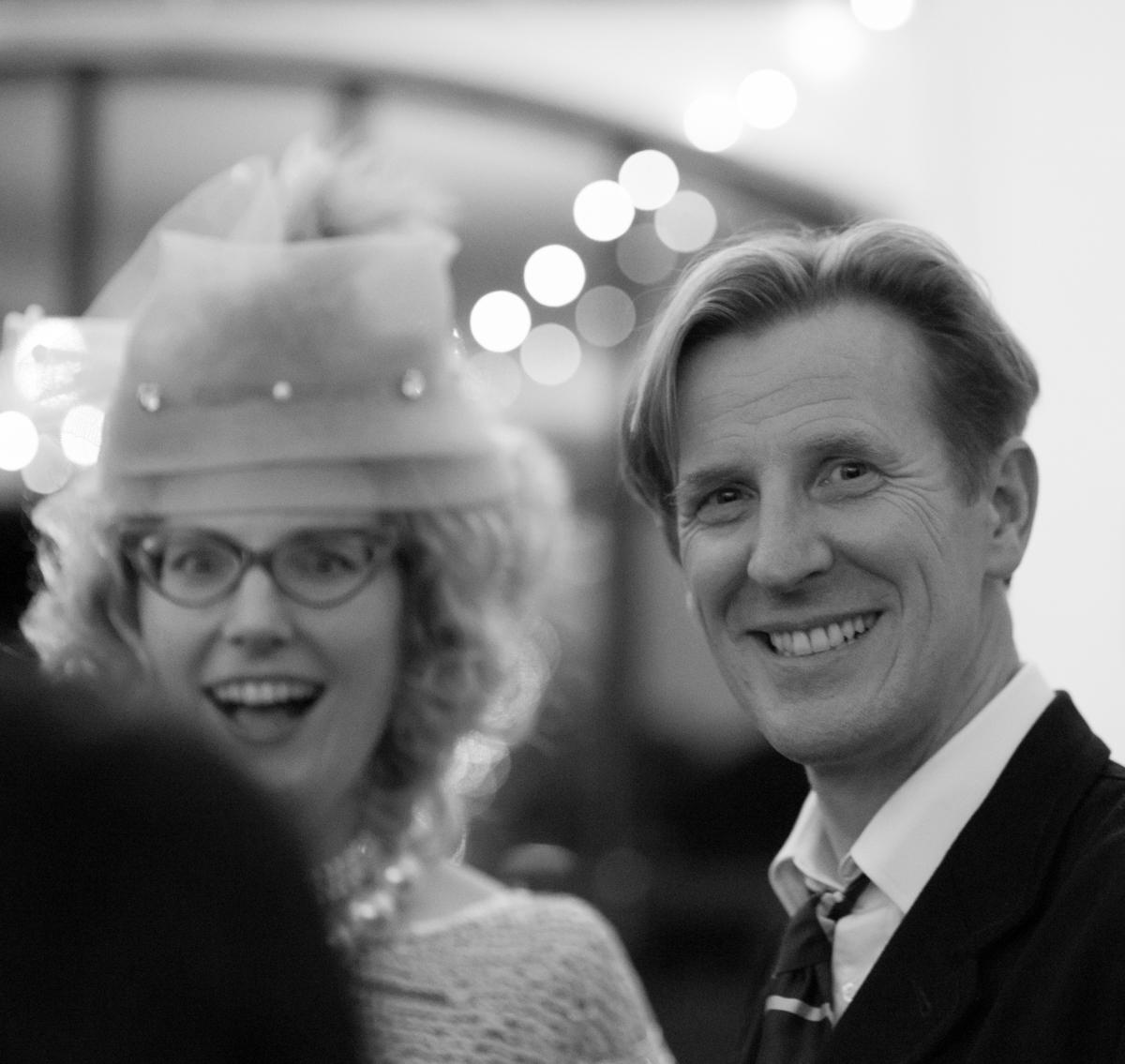 The Nosy Crow offices are, it turns out, not referred to as the ‘crowsnest’ for nothing. Several flights of zigzagging open black iron fire-escape steps have to be climbed before you arrive at the surprisingly spacious headquarters of this unique publishing enterprise. 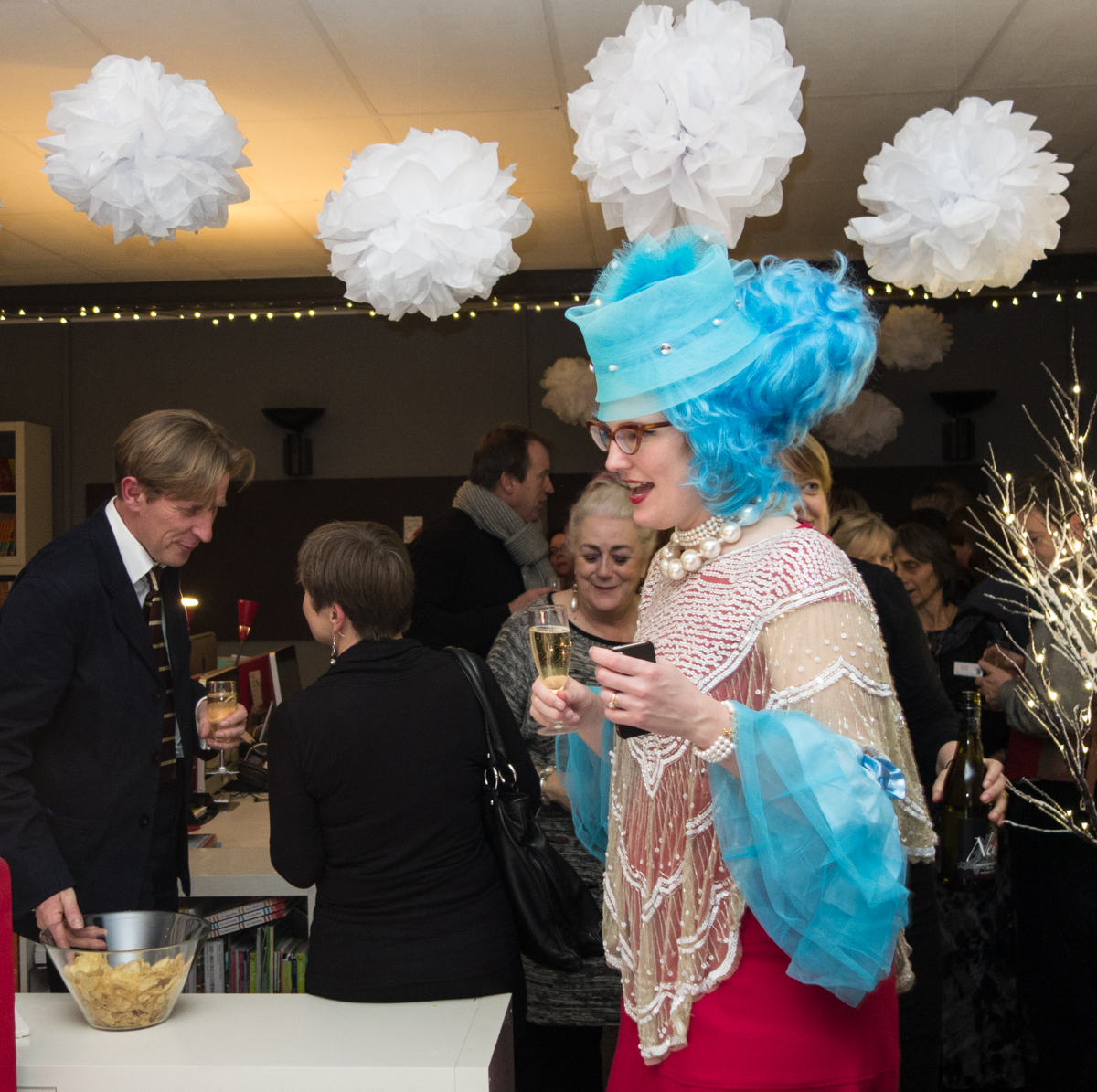 I have known and admired Kate Wilson since her days at Macmillan Children’s Books in the 1990s, where she led a really powerful team of editors and authors, with special support for children’s poetry. She moved to Scholastic in 2004. Although Nosy Crow, the publishing company she formed in 2010, has a wikipedia entry, Kate herself does not, which surprises me, because she has to be one of the most significant figures in contemporary children’s publishing, worldwide. 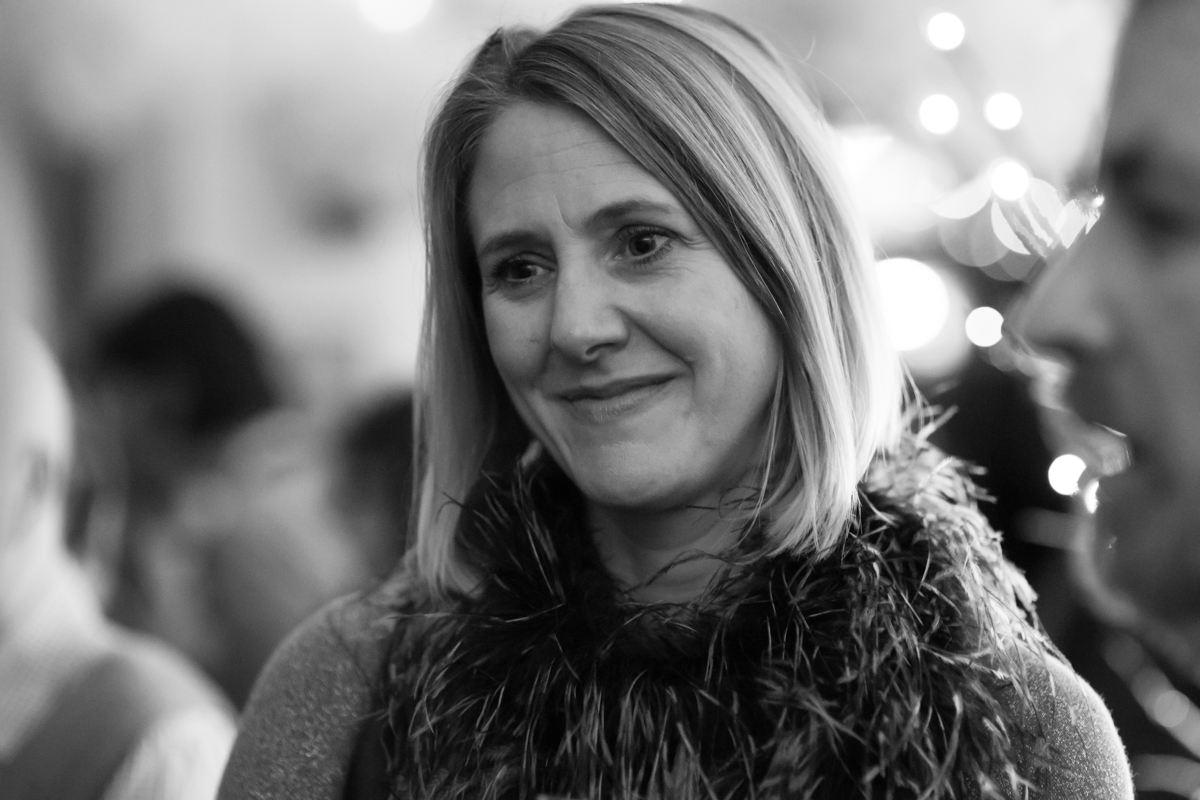 Nosy Crow itself is a unique venture because from the outset it has endeavoured to be a publisher of both traditional print books and digital apps. 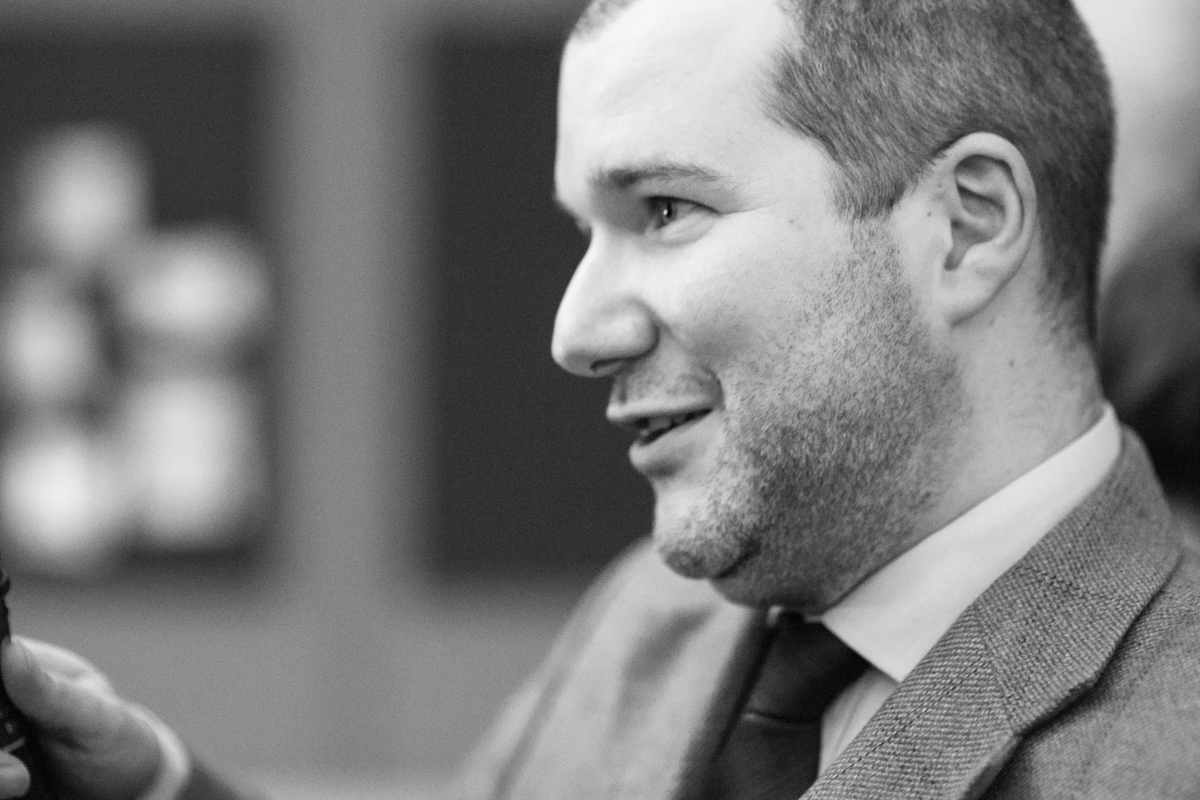 I suppose it’s because I remembered the images of Nosy Crow’s first office posted to the Nosy Crow blog and the fact that the company is very young still (in its third year) that I was expecting a somewhat more cramped and modest space than the expansive area that opens up at the top of the steps. In her speech Kate told us that Nosy Crow has now published 109 books and (I think she said) 11 apps. 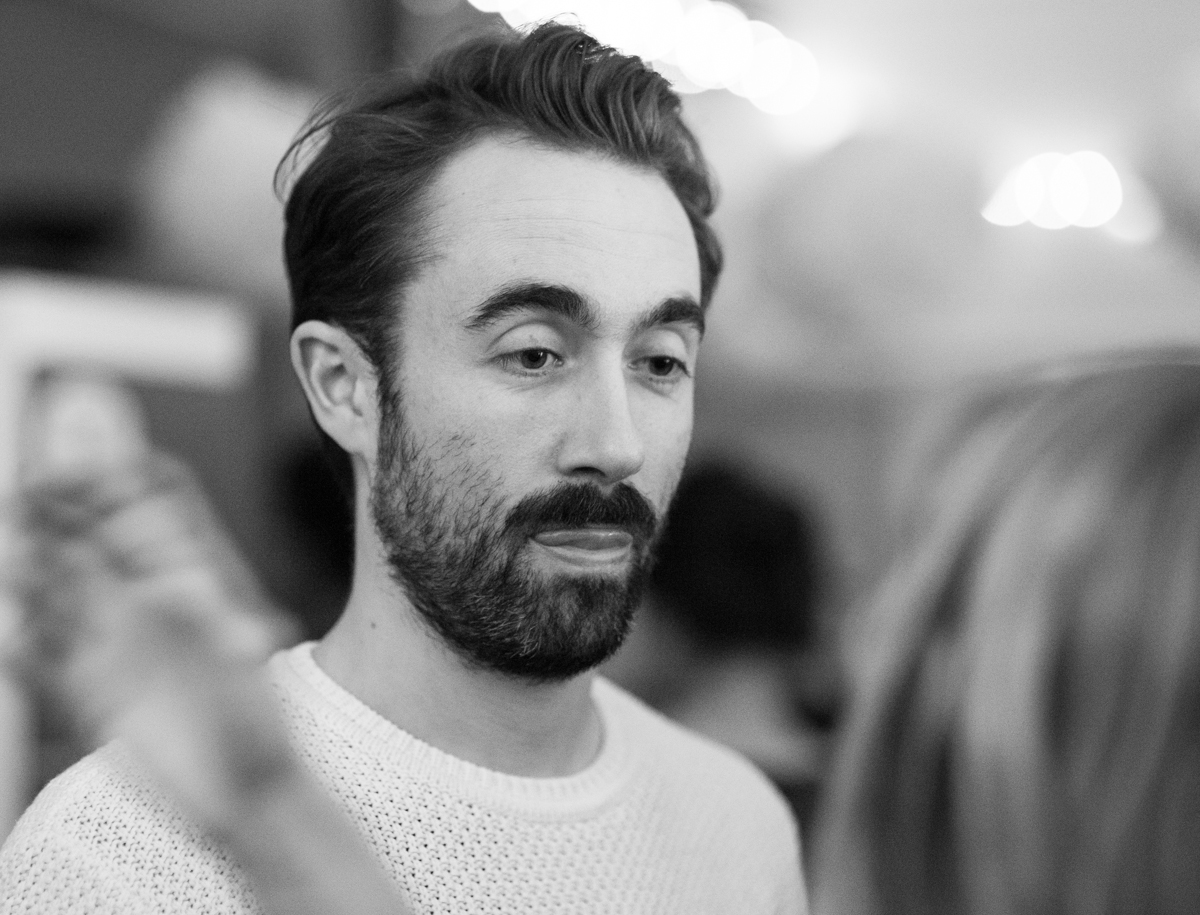 A big entrance had plenty of room for signing in desk and cloakroom area where Dom Kingston (who I’m sure I hadn’t seen since his days at HarperCollins) and Joanne Owen (with whom I later shared fond memories of various dinner party launch events, no longer so common) were doing the greeting.

And then into the crowd. The ‘office’ had been given a wintry feel with decorated branches and paper snow puffs. 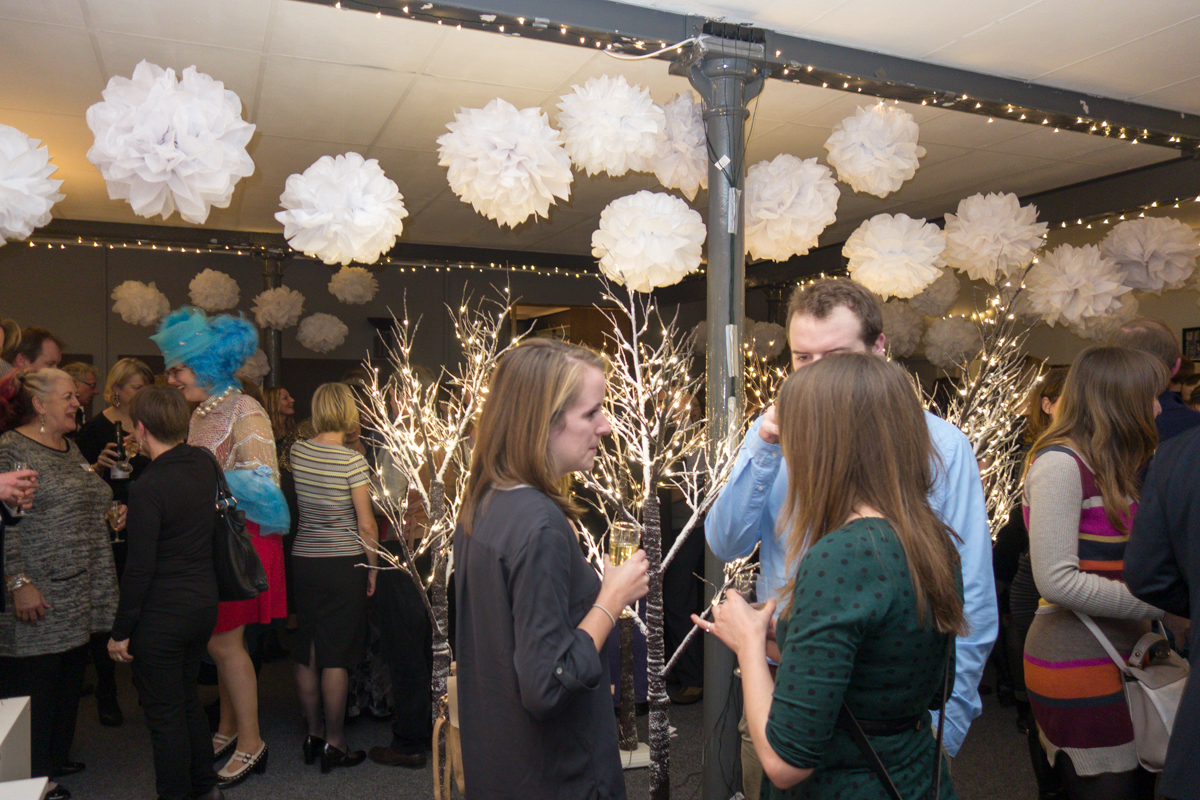 I made a conscious choice to leave my big-gun camera in its bag for most of the evening, and just had the little RX100 round my neck, giving more time to mixing and mingling than I often do at such events. My first conversation was a fascinating one with two members of the Nielsen BookScan team. They told me that I could give them a receipt for a book purchased in any bookshop and they would be able to locate the data on their system. I was amazed that the sales tracking is so comprehensive but they assured me that nearly all bookshops feed sales data direct form their tills* into BookScan. We went on to talk about the chart fixing that used to be endemic in the record industry and it was explained to me why fixing the book charts is very much easier to detect and, aside form one known case in America, almost certainly doesn’t happen.
*I gather small independent bookshops tend not have tills sophisticated enough to do this and that their sales data is submitted somewat differently. 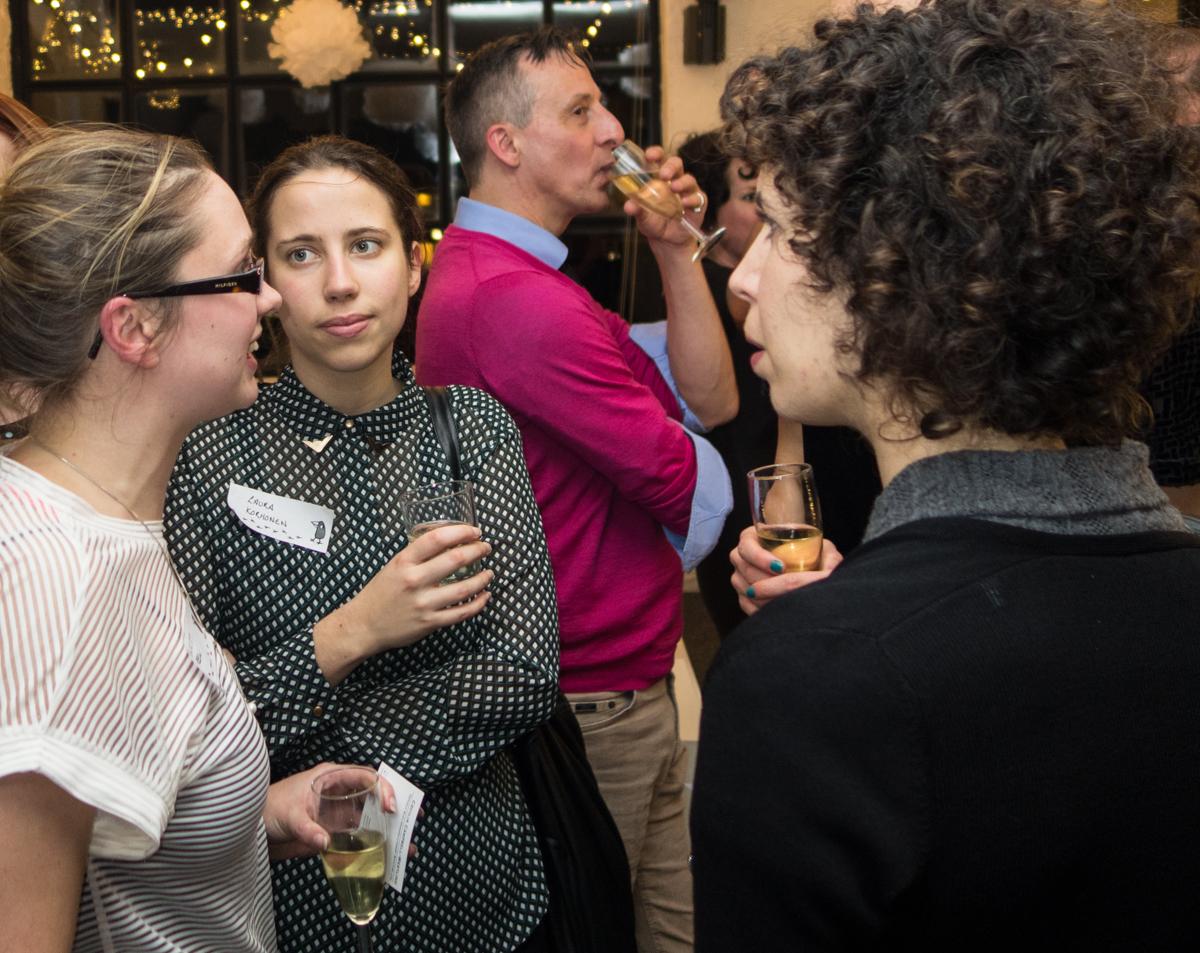 It’s always lovely to see Laurence Anholt and his graciously, glamorous wife Catherine, and it’s good to note that they are now on the roster of Nosy Crow authors/illustrators. They described how they had moved house twice since my visit to Lyme several summers ago.  [Gosh, I’ve just  checked the datestamp on that link, and it was eight years ago!] 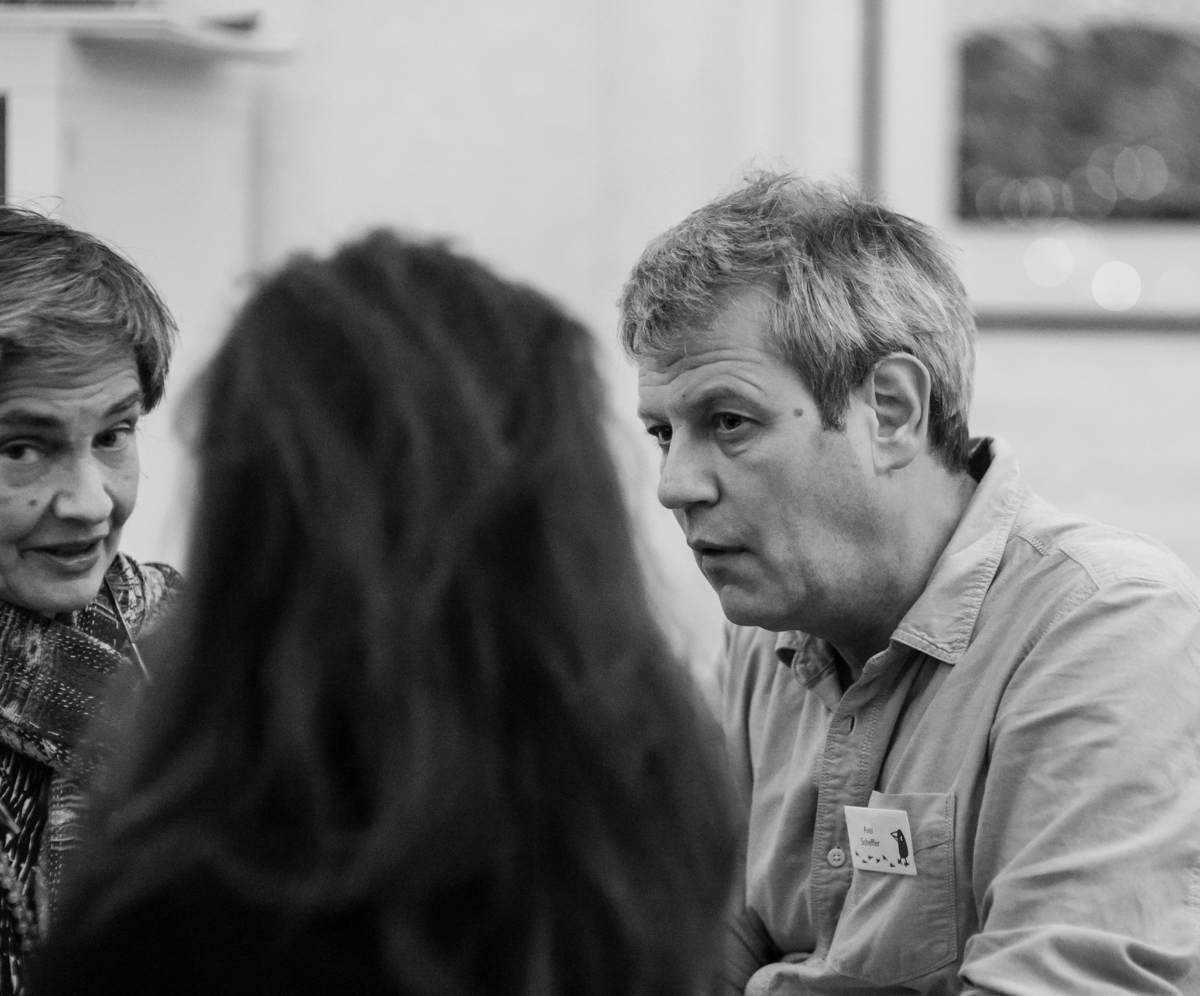 Chris Brown described to me how he is standing down as reviews editor for the SLA (School Libraries Association) and handing over to Joy Court, which prompted us to share experiences of  having large quantities of books constantly arriving and consequently having a constant need to move books OUT of the house by one means or another. Chris is intending to give more time to enhancing the profile of the School Information Book Award, presented each year at the Bath Children’s Festival.  ACHUKA thinks this is really good news, as non-fiction books deserve their fair sure of the spotlight. 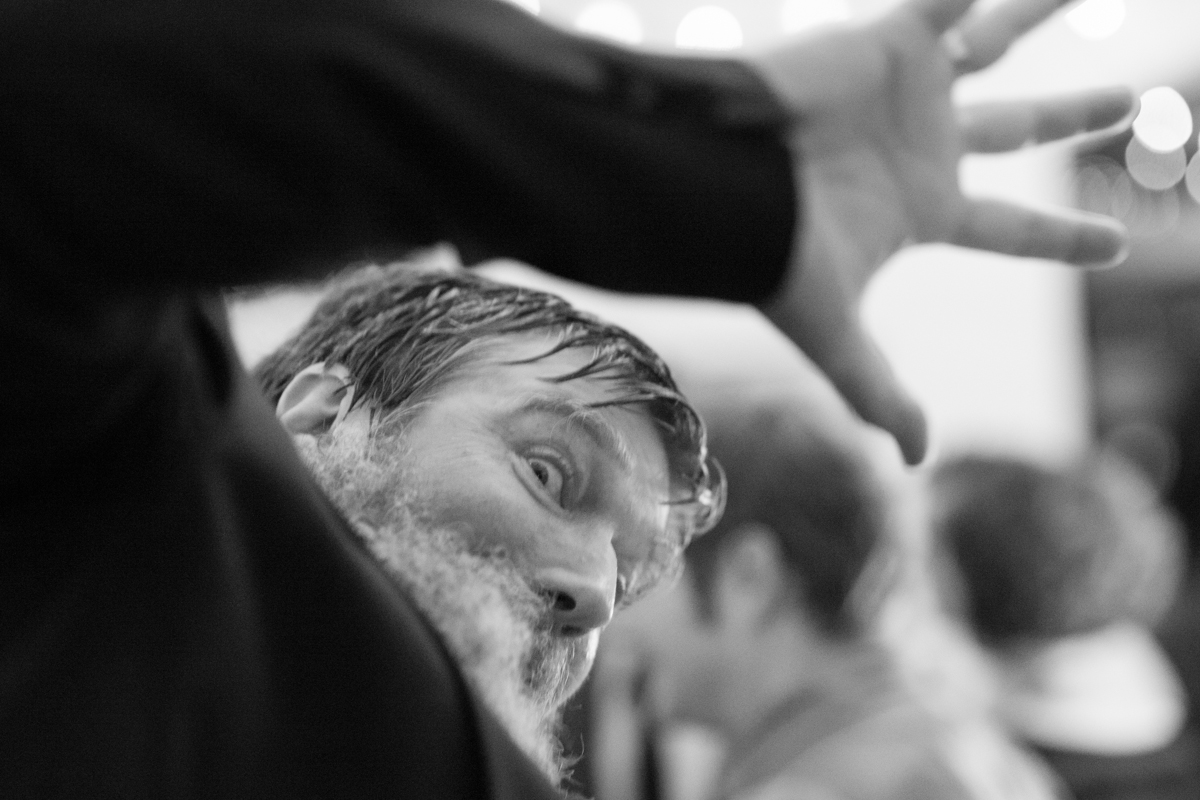 Sarah McIntyre took a selfie of herself with my head next to hers just before I bumped into Catherine Stokes who I used to communicate with lots when she was at OUP. I forget whether this was before or after my conversation with a collar-loosened Philip Ardagh who, apart form saying lots of things for my ears only (and any eaves-droppers’), asked me a lot of searching questions about ACHUKAbooks’ publishing programme, and in particular whether I felt, as a publisher, compromised as a reviewer. I said I didn’t. In fact, it hadn’t occurred to me that I would/should/might. But possibly he felt other publishers might feel I was compromised, although I would have thought  the ACHUKAbooks publishing profile is at present so low as to be not worth factoring in. I intend to do a blog post shortly about the first 24 months of the ACHUKAbooks digital publishing experience shortly, so no more about that now. 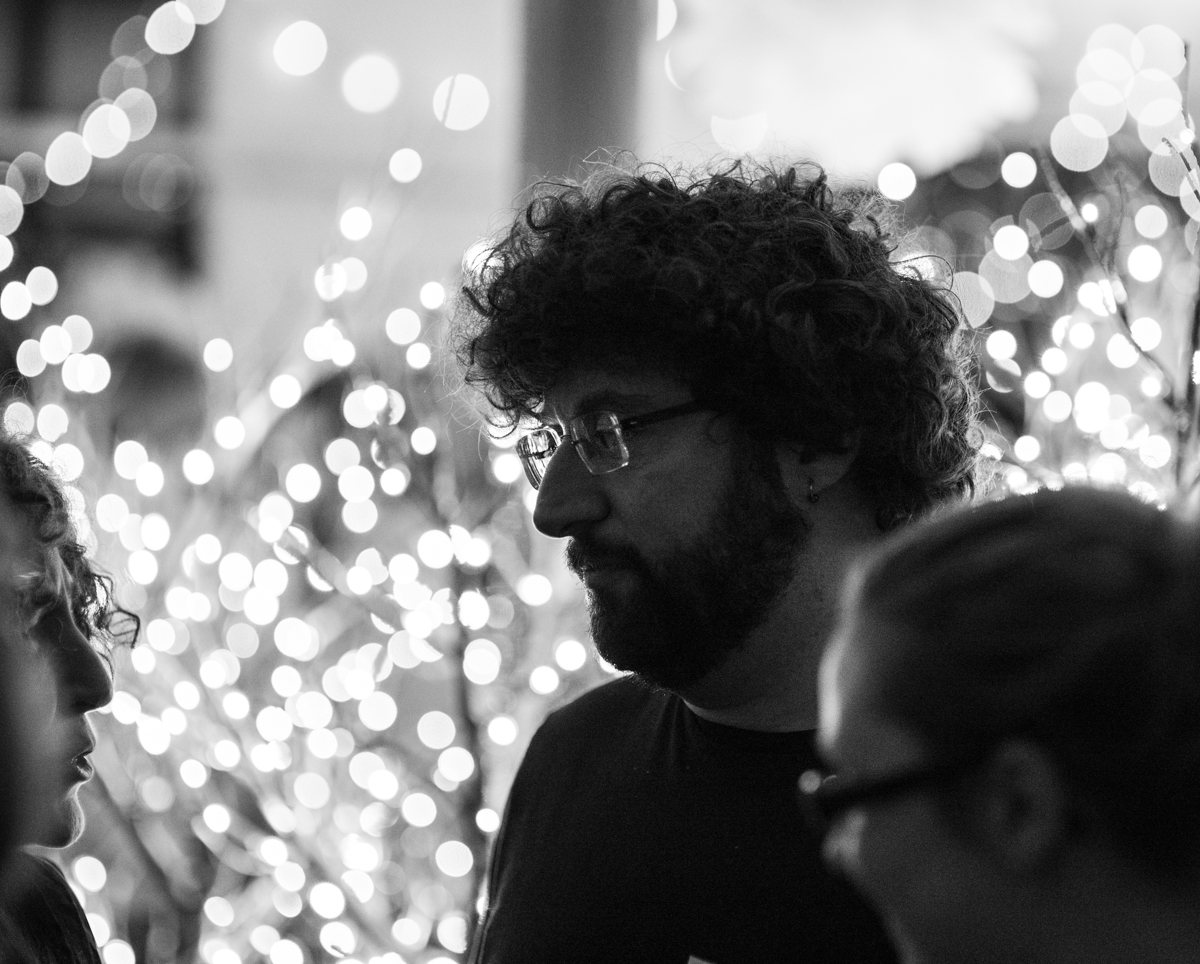 And then I did get my big camera out, took a few photos, chatted with the event photographer about bounce-flashing, and hence (probably) missed opportunities to speak with people that I hadn’t even noticed were there, and some I had noticed but just didn’t rub shoulders with, so to speak. John McClay, for one example, was always busily occupied. I haven’t spoken with him for ages, and really must when we’re both at a similar occasion. I’m sure I see the back of Philippa Milnes-Smith’s head in one of the photos (if I’m not mistaken) but don’t remember seeing her at any point during the evening. Several other people – Lucy Coats for example –  tweeted that they had been there too. I guess this a sign of a great event. 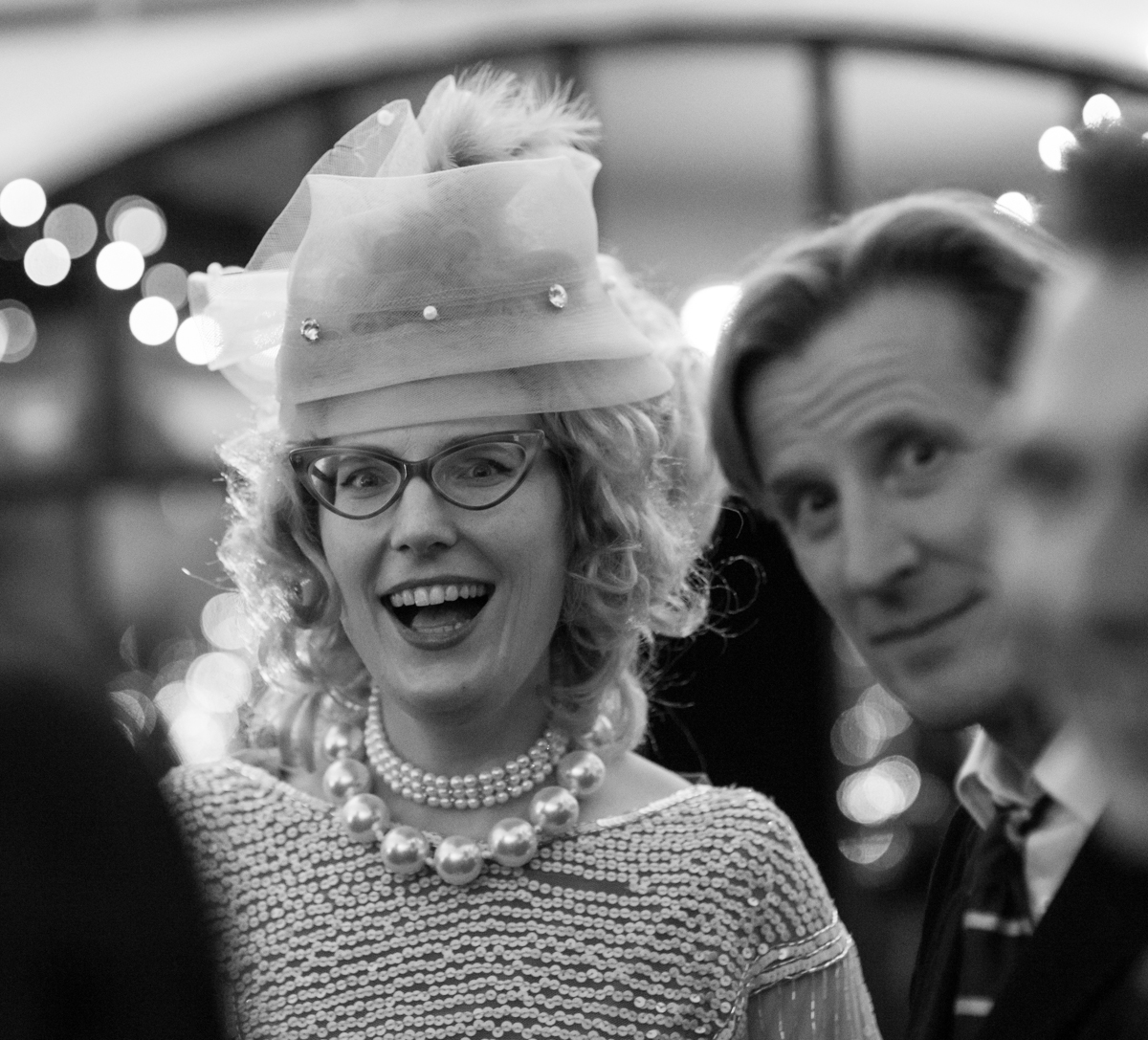 So Happy Christmas, Nosy Crow and may you flourish in 2014.