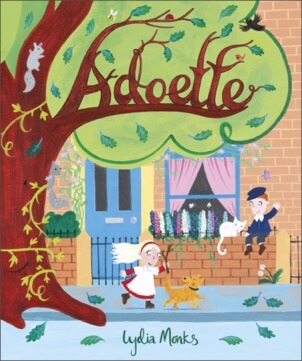 Andersen Press have just announced acquisition of Adoette, a new picture book written and illustrated by Lydia Monks, her first book on the Andersen list. Adoette will be published in hardback in September 2022.

The book was inspired by Lydia’s participation in the fight to stop 10,000 trees being unnecessarily chopped down in her hometown of Sheffield. The campaign attracted support from many big names such as Jarvis Cocker, and Chris Packham. They were successful, and thousands of trees were saved from the cull and have inspired similar campaigns around the country.

In the book Adoette lived to be 100 years old. Just imagine all the things she saw! She lived on the same street all her life, but one day, people decided it would be best if she would go… Lydia Monks beautifully tells the tale of the life of one tree, from a young sapling to a mighty oak, becoming the beating heart of the community she lived in, right up until the day they cut her down.

But there’s hope, when one little girl takes one of her acorns to plant in the community garden.

Sue Buswell, Andersen Press’ Editorial Director for picture books acquired world rights for the book from Lydia’s agent Hilary Delamere from The Agency in a one-book deal – another book has since been signed due for publication in 2025.

On the book Lydia has said, “In 2014, Sheffield council started cutting down thousands of healthy, mature street trees. One of the trees on the list to be felled was outside my daughter’s school. It was a big old ash tree, that had probably stood there for 150 years, long before the school was built. The school children played around it after school, and it seemed like a friendly presence on the street. I wondered about what the tree had witnessed over the years, and that inspired the book. ‘Adoette’ is a Native American name which means ‘large tree’. Lots of people, including myself, joined campaign groups to save the Sheffield trees, and happily the old ash tree is still standing today.”

Sue Buswell adds, “I have been passionate about the nurture and planting of native trees for as long as I can remember and now, more than ever, as the importance of trees to our well being and environment is more widely understood, I am so proud that Lydia chose Andersen Press as publisher for this stunning, timely and compelling story.”