You are here: Home / BookOfTheDay / Miroslav Sasek by Martin Salisbury 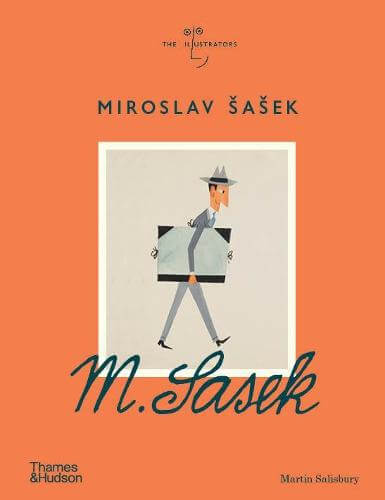 “For a large number of humans on earth, their first cultural encounter with the feeling of many cities or countries, came from the pens and brushes of Miroslav Šašek. Paintings and drawings that were part realism, part gestural, but entirely convincing and always charming” Oliver Jeffers

A must-have title for anyone with an interest in the history of picture book illustration.

Czech artist Miroslav Sasek (1916-1980) was remarkable for his unique and pioneering approach to non-fiction picture books, illustrating daily life as if seen from a child’s perspective. His bestselling This Is… series eventually totalled eighteen books. A witty collection of travel guides for children, the books employ an avant-garde synthesis of word and image that captures the  idiosyncrasies of life and culture in cities and countries around the world.

Martin Salisbury analyses how Sasek became one of the twentieth century’s most beloved and significant contributors to the world of picture books. The artist’s charming travelogues continue to appeal to adults and children alike, even in a digital age exploding with travel imagery. In this beautifully designed book, illustrated with sketches and original artwork, and featuring examples spanning from Greece to Hong Kong, Rome to San Francisco, Ireland to Israel and more, Sasek’s best-known works come alive alongside lesser-known aspects of his practice, such as painting and puppet-making.

Martin Salisbury has one of the very best Instagram feeds. If you are not following him, you should be: