You are here: Home / Blog / Meet An Illustrator 17 – Sarah McIntyre 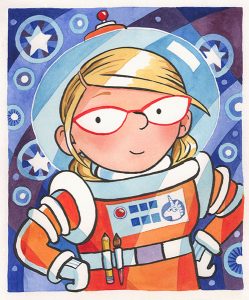 I first got the idea for a weekly Meet An Illustrator feature when reading a Twitter post from our 17th guest about her favourite pens and where to buy them—so it’s an enormous pleasure to welcome Sarah McIntyre. 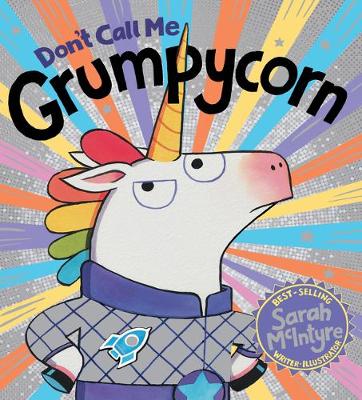 one of Sarah’s solo books

Sarah is known both for her solo illustrated books and for her collaborations with Philip Reeve. She is also a highly colourful character on the UK children’s books scene and, in pre-pandemic days, would always turn up at book events in elaborate costumes, usually involving dramatic home millinery—we all look forward to a return of those days. 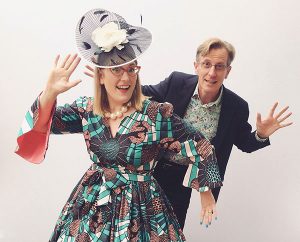 Just about to be published in paperback (on 10 May):
Kevin and the Biscuit Bandit
(Book 3 in the Roly-Poly Flying Pony series by Philip Reeve and Sarah McIntyre, OUP) 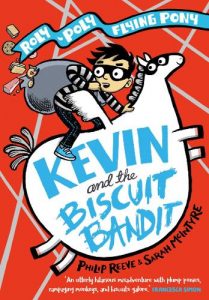 and there’s not long to wait for Book 4 in the series:
Kevin vs the Unicorns (Book 4 in the Roly-Poly Flying Pony series by Philip Reeve and Sarah McIntyre, OUP), is coming in September: 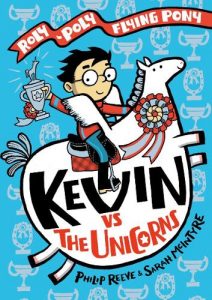 McIntyre and Reeve are currently embarked on a virtual 14-week summer tour of bookshops, as announced in The Bookseller at the end of April.  The tour will showcase a different bookshop every week , featuring bookseller interviews on their blogs and via social media. It will run until 2nd September—culminating in publication of the fourth Roly-Poly Flying Pony book, Kevin vs The Unicorns [see above], which is dedicated to “all the hard-working booksellers who have soldiered on through the pandemic”. 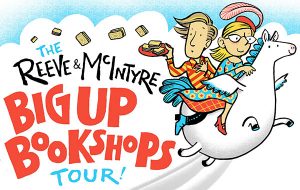 It’s possible that I only remember these because my mother kept them in a scrapbook, but I drew a series of potato people with matchstick arms and legs and thought them very fine.

My parents always kept a good stock of drawing material in our house, and were creative themselves: my mother was a teacher and would make little pictures out of food on our plates, like the face of a lion out of hotdog rounds and macaroni & cheese. My dad was a Boeing engineer and would build little things, like a propeller for the garden that made it look like a little wooden man was turning the crank.

I take huge inspiration from working on books with Philip Reeve—he thinks very differently from me, and he makes me challenge a lot of my assumptions, in a good way. We have a good laugh when we put stories together and, because we’re so different, something emerges that’s different from what we’d do on our own. He’s also a great second pair of eyes when I’m working on my own picture books.

Another artist who hugely inspires me is Jonathan Edwards (aka Jontofski on social media). He’s based in north Wales and I love the way he keeps pushing his technique and exploring new ways of creating interesting lines, and breaking up a picture into planes of colour and light. When I was studying in Moscow, I was very taken with the work of an artist who did something a little bit like that, named Arkstarkh Lentulov, and Jonathan sort of picks up where Lentulov left off. His work gives me a lot of pleasure and inspires me to push myself harder.

We always had great art teachers in school – Charlie Brown in primary school and JoAnn Grambush in secondary school. I also took weekly painting classes from a Bulgarian art teacher named Ilona Ritler when I was a kid. She was rather eccentric—she’d pull bits of dead crow out of a cabinet to explain wing structure. I did my BA in Russian literature at university in the USA, but I also did what’s called a ‘minor’ in History of Art—the equivalent to half a degree—and learning about historical art was incredibly important to me. I was 30 years old when I decided to do my MA in Illustration, at Camberwell Art College, under Janet Woolley.

I love Pentel brush pens; I’ve gone through a surprising number of them in lockdown.

I often buy pens online at Cult Pens but I love going into Cornelissen & Sons by the British Museum for things like dip pen nibs, and I often pick up bits and bobs at the London Graphic Centre. John Purcell in Brixton supplies my big sheets of watercolour and cartridge paper.

Mostly Photoshop, although I only know how to use a tiny percentage of what it can do.

I think my first paid commission was at uni: another student asked me to paint some illustrations for her story… I think it had a medical bent to it, I can’t even quite remember.

I’m working with David Fickling designer Alison Gadsby on a cover for Lissa Evans‘ next novel and doing illustration roughs for an anthology with a new publisher (but I don’t think I’m allowed yet to say what it is yet).  During lockdown, my husband Stuart and I also set up an online shop to sell cards and prints (and occasionally original art when I get the time), so we keep that ticking over with weekly trips to the post office. (sarahmcintyre.bigcartel.com)

Coffee or tea? Tea in the morning, coffee late morning, tea the rest of the day.

There are four cats and a dog in my studio house which I borrow for cuddles, but I don’t actually own any of them.

Grape or grain? I like a wee glass of wine, or an Islay whisky, or a negroni cocktail.

Sunrise or sunset? I like the idea of sunrise, but I’m much less of a disaster at sunset.

What do you listen to when you are working? I build up playlists and listen them to death, then look around hoping that someone will help me find some new music. Darryl Cunningham, Woodrow Phoenix and Jamie Smart have all been helpful in musical crisis. Sometimes I listen to audio books and podcasts but only when I’m painting final work—they involve too much concentration when I’m trying to write or work out pencil roughs.