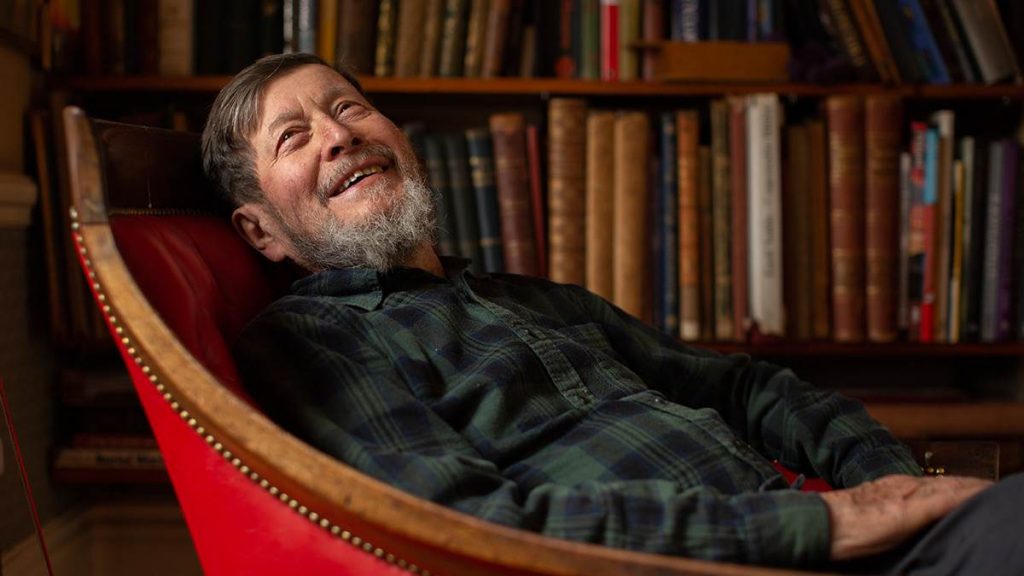 This wonderful portrait of Jan Pienkowski (by David Bebber) is taken from the Booktrust website.

Jan Pienkowski has today been presented with the Booktrust Lifetime Achievement Award. The presentation took place in the Barbican’s Garden Room with many luminaries of the children’s books world present.

Now aged 82, Pienkowski has Alzheimer’s and finds it difficult to speak in public. David Walser therefore spoke on his behalf, giving a moving account of Jan’s early life and harrowing escape from Poland, and revealed that Jan cannot stand to hear screaming or any very loud noise to this day.

Walser also spoke with humour about his partner’s Alzheimer’s. “Since being told about it, he has forgotten it many times so when I, or any friends in the know, remind him, it always comes as a lovely surprise. He has been able to enjoy the news many times over.” Penkowski sat beaming graciously on a chair set out for him at the side of the stage. After being presented with the award plaque, I noticed him taking a cloth from his pocket and giving it a shine.

Before the presentation those involved with the judging (Nicolette Jones, Smriti Prasadam-Halls, SF Said) paid glowing tributes to Pienkowski’s work.

from the Booktrust site:

The BookTrust Lifetime Achievement Award celebrates the body of work of an author or illustrator who has made an outstanding contribution to children’s literature. The award has been running since 2015 to recognise an author or illustrator’s lifetime of work. Previous winners include Shirley Hughes, Judith Kerr, Raymond Briggs, Helen Oxenbury and the late John Burningham, who were awarded the first ever double prize in 2018.

Jan Pieńkowski, aged 82, was born in Poland in 1936 and spent his early years there and in Bavaria, Vienna and Italy before arriving in England at 10 years old.

Jan is renowned for being one of the greatest innovators in book illustration, particularly for his signature silhouette cut-out illustrations and his pioneering pop-ups. His books tread the perfectly fine line between being slightly frightening but also humorous and fun. Jan says: ‘It’s ok to have scary books, as long as you’re tucked up in bed, because it’s a safe distance.’