You are here: Home / Blog / Hide And Secrets by Sophie McKenzie 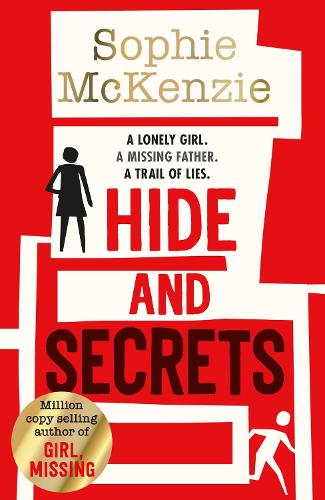 “McKenzie has written a thriller that moves at an electrifying pace. Although the reader is on Cat’s side as the story unfolds, the reader’s perception of who is a criminal and who is a victim will change. The bedrock of the narrative which does not fail to touch the reader is the relationship between Cat and her sister. Readers should be warned. Be prepared. There is a plot twist designed to keep them gasping at the end of every chapter, a twist that had this reviewer in its grip at every turn.”
BfK 5-star review

A lonely girl, a missing father and a trail of lies . . . From the million-copy bestselling author Girl Missing, comes a blockbuster teen thriller that will have you looking for answers round every corner.

Fourteen-year-old Cat is lonely – reeling from the loss of her father, she’s disconnected from friends and fighting with her mum. But when a new boy, Tyler, arrives for the summer, Cat finds herself opening up to the handsome stranger. A shocking revelation about her dad turns Cat’s world on its head. She and Tyler uncover a series of secrets that take them on a perilous journey. With fresh lies exposed and threats from a dangerous gang revealed, will Cat risk everything to keep herself and her family safe?

An explosive, edge-of-your-seat new drama from the original queen of teen thrillers,