You are here: Home / Archives for Education / Computing

A new interactive educational initiative called “Every Child Can Code” is announced today for teaching children to code computers. The scheme will cater for children from age 7 or even younger. Sir Clive Sinclair’s team at Retro Computers Ltd, which recently launched the ZX Vega games console, plans to encourage and enable children to code their own games programs. The children can then exchange their games with each other via email, and the company will put the best games submitted to it on the web site www.EveryChildCanCode.org for everyone to enjoy.

“Sir Clive’s Spectrum computer spawned an entire generation of young computer coders during the 1980, making the UK the world leader in this field. We aim to create the same level of enthusiasm for coding amongst today’s youngsters. Nowadays computer code lies at the heart of so many products and services that coding is a vital skill which should be learnt by everyone at school.”

A key component in the Every Child Can Code scheme is a unique child-friendly software “coding teacher”, which monitors a child as they code their programs, it warns the child when they have made a coding error, and it assists the child in understanding what they have done wrong in their coding and how to put things right.

The new coding learning scheme will be free of charge and is being launched today for the start of the new school year. The scheme is for all children, not just those who own or have access to a ZX Vega.

In parallel with the Every Child Can Code scheme Retro Computers Ltd have also announced today the inauguration of the National Schools Coding Championships. There will be one division for primary and prep schools, and another division for secondary and independent schools and sixth-form colleges.  Every school in the UK can take part. The prizewinning entries will be added to future versions of the ZX Vega’s collection of 1,000 games.

Both initiatives aim to encourage schoolchildren to learn and enjoy coding, which is a vital skill for today’s and tomorrow’s world. Sir Clive Sinclair said:

“Many children already find coding to be fun and rewarding. With the National Schools Coding Championships we are adding the excitement of competition to the reasons why more children will take up coding with enthusiasm. Our aim with these championships, as with the entire Every Child Can Code scheme, is to encourage the growth of a new generation of coders in the UK, so our country can once again become a world leader in this field.”

This weekend’s Observer Tech Monthly featured “The Best of British Startups” as represented outside of London in places like Brighton, Edinburgh, Bristol & Bath and Belfast (these four given double-page spreads); also Newcastle and Manchester (both full-page spreads); with other cities summarised on a final page listing.

It struck me how few of these companies are focused on children’s entertainment or education, an exception being Brighton-based Lighthouse Learning, co-directed by Danielle Barnetche and Alex McGregor. 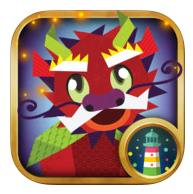 This company’s tagline is “Where learning is delightful” and they have so far created two well-received apps – Dragon Shapes: Geometry Challenge and Shape Arts: Geometry Creations. 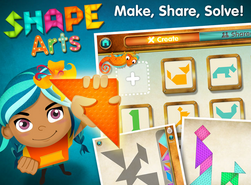 The Inkle Studios website, created by game developers Josef Humfrey and Jon Ingold,  looks amazing – and why hadn’t I heard about Inklewriter before – what a  useful resource, for educators as well as writers of interactive fiction.

Paula Cocozza’s feature about iPads and young children in today’s g2 section of The Guardian is headlined differently in the print edition of the paper. Underneath a fullpage photo of a boy and a girl leaning over a tablet screen and playing a game, the headline reads “Children of the revolution“. The sub-heading (reproduced below) is a good indication of the balanced, level-headed nature of the whole piece.

In the middle of the feature comes a welcome debunking of the story that surfaced last-year about a four-year-old who was reported to have needed treatment for iPad addiction. Cocozza manages to get the doctor involved with this case to concede that the ‘treatment’ “comprised a single informal phone call… in which he gave advice.” He is also quoted as saying that “addiciton” is not an appropriate word to use in relation to such young children.

The whole piece is definitely worth a read.

Tablet ownership has more than doubled in the past few years – and as many parents are finding, children are highly proficient at using them. But are these devices harmful to their development? Or do they encourage ‘technological intelligence’?

via Are iPads and tablets bad for young children? | Society | The Guardian.

This article doesn’t seem to say very much beyond what we know already – teachers do not feel sufficiently skilled to teach the new computing curriculum.
“The poll of secondary school teachers showed that 74 per cent of ICT teachers do not believe they have the right skills needed to deliver the new computing curriculum which is set to roll out in September next year. They also fear they do not have the time to learn the necessary skills.”
What is being done

Teachers lacking the confidence to teach pupils computer programming skills need to change the way they approach their subject, a pioneering educator has said.

via Educators call for reform in how programming is taught in schools – News – Gadgets & Tech – The Independent.

Huge response in the comments section to this piece…

What price progress? The answer for parents who send their children to state schools for what they thought would be a free education is that it can be very high indeed. More and more parents are being asked to buy tablet computers for their children to use in class, at a cost of several hundred pounds. And the move is drawing grumbles from families on tight budgets and fuelling fears of a “digital divide” in education.

via Schools ask parents to stump up £200 for iPads | Education | The Observer.

1. Saving work to the Documents apps and using share to iTunes to make a copy from Digital Roadtrip on Vimeo.

Printing student’s work in Progress from iPads to a folder on your laptop.

If your students are not writing into a virtual space from their iPads, for example a blog, wiki or shared app like Evernote, you will struggle to monitor their progress. So here is an awesomely nifty way of capturing evidence of “work in progress”.

The joy of this is that all the files neatly arrive in one folder on computer. If the learners label the files as you have them named in your mark book, you will have an instant overview of who has handed work in.