You are here: Home / Illustrated / Because of You, John Lewis by Andrea Davis Pinkney ill. Keith Henry Brown 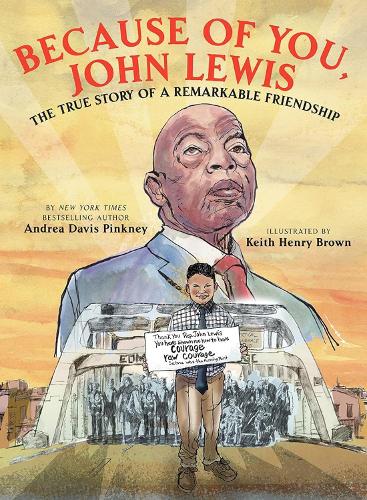 “An inspiring story of friendship and activism. Based on the true story of ten-year-old Tybre Faw and his friendship with Congressman John Lewis, this is a powerful story about dreaming big and standing on the shoulders of those who came before us. With stunning artwork by Keith Henry Brown to accompany the poetic narrative, this is a book which readers will treasure.” The Scotsman
“Brown’s watercolor-and–quill pen illustrations are striking and larger than life, adding great depth and meaning to the verse. Backmatter includes a statement further describing the relationship between Lewis and Tybre, a timeline of Lewis’ life, captioned photographs, and the poem “Invictus” by William Ernest Henley, which Tybre delivered at Lewis’ funeral service. This eloquent tribute is a must-read.” KIRKUS

An inspiring story of a friendship between Congressman John Lewis and ten-year-old activist Tybre Faw by New York Times bestselling author Andrea Davis Pinkney! Ten-year-old Tybre Faw is obsessed with history and the civil rights movement, and he devours every book he can find on the subject. When he learns of Congressman John Lewis’s harrowing and heroic march across the Edmund Pettus Bridge in the fight for the right to vote, Tybre is determined to meet him. Tybre’s two grandmothers take him on the seven-hour drive to Selma. And as the two meet and become fast friends, Tybre joins Lewis for the annual walk across the Edmund Pettus Bridge! When John Lewis is laid to rest, Tybre is invited to read Lewis’s favourite poem, “Invictus,” at the funeral service. Pinkney weaves this story of a boy with a dream with the story of a true-life hero (who himself was inspired by Martin Luther King when he was a boy). Who will be next to rise up and turn the page on history?