You are here: Home / YA / All Our Hidden Gifts by Caroline O’Donoghue 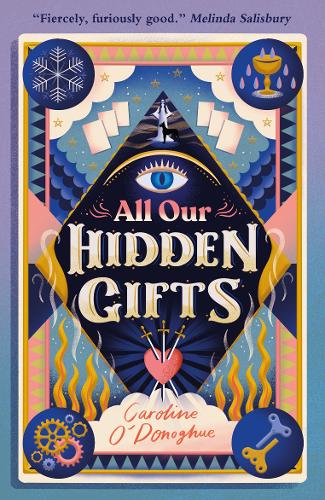 “O’Donoghue’s intriguing story takes in myth, history, tensions between Catholic and Protestant, and race in Ireland. Helping the repentant Maeve search for the missing girl is Lily’s nail-polish wearing brother Roe, formerly Rory, who is the essence of fluidity in a novel that’s all about the power of liminal spaces.” The Financial Times
“Detailed, interesting characters carry this contemporary story of competing energy and curses. Woven delicately throughout are chillingly eerie depictions of the Housekeeper, a figure who shows up on an extra card in the deck, echoing the White Lady legend from Irish folklore. Even more disturbing is an organization of young people led by a homophobic but charismatic figurehead intent on provoking backlash against Ireland’s recent civil rights victories.” KIRKUS
“Ghostly menace, queer liberation, and sweet nonbinary romance all find room in this modern Irish contemporary.” Publishers Weekly

Maeve Chambers doesn’t have much going for her. Not only does she feel like the sole idiot in a family of geniuses, she managed to drive away her best friend Lily a year ago. But when she finds a pack of dusty old tarot cards at school, and begins to give scarily accurate readings to the girls in her class, she realizes she’s found her gift at last. Things are looking up – until she discovers a strange card in the deck that definitely shouldn’t be there. And two days after she convinces her ex-best friend to have a reading, Lily disappears.

Can Maeve, her new friend Fiona and Lily’s brother Roe find her? And will Maeve’s new gift be enough to bring Lily back, before she’s gone for good?