You are here: Home / Blog / ACHUKAreview: All These Beautiful Strangers by Elizabeth Klehfoth 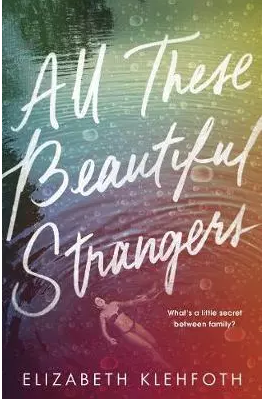 This is an exceptionally good pageturner of a novel.

It opens with an immaculately written Prologue, a single page of beautifully cadenced scene-setting prose which immediately sets up high expectations.

The opening chapters are set in a college called Knollwood Prep and I was briefly concerned that the book was going to be a conventional teen drama about a secret student club.

But it opens up in the fourth chapter to bring in a compelling back story involving the main character’s family.

Charlotte Calloway’s father, Alistair, had attended Knollwood a generation earlier and been a member of the the same society that Charlie herself joins.

From this point on the novel is variously told from the points of view of Alistair, Charlie’s mother Grace, and of Charlie herself.

As the thriller builds momentum, and the mystery surrounding both Grace’s disappearance several years previously and the true explanation behind the apparent suicide of a student who was at Knollwood with Charlie’s father, the reader is increasingly drawn into a web of intrigue and betrayal involving the older generation.

Klehfoth doesn’t pull any punches when writing these scenes, which is what makes the book so admirable. This is very much a Young Adult novel, rather than a work of teen fiction.

Some of the contemporary escapades involving Charlie and her fellow students can have a bit of a Riverdale vibe about them, even occasionally of boarding school antics as seen in The House of Anubis. Klehfoth’s writing never falters, always hitting the appropriate note.

She is particularly good at describing the foibles of the rich and privileged set who make up the membership of the secret society and from which Charlie herself comes. So good I wondered if the author herself comes from a similar background.

I had the opportunity to ask her this question during a lightning interview at an event in London recently. Apparently not. Her Indiana upbringing was far more humble, though when she attended college in Orange County, she was surrounded by students from a smart set whose parents would, quite literally, be able to buy them houses.

I also learnt that All These Beautiful Strangers is her first attempt at full-length fiction, which makes the way she manages to structure and interweave her mixed point of view narrative so extraordinary.

The book is already optioned and I can imagine it making a really good Netflix drama. But it’s as a thoroughly good read that I am recommending it here and giving it the full five out of five, because this is as good a YA thriller as you are likely to come by this year.