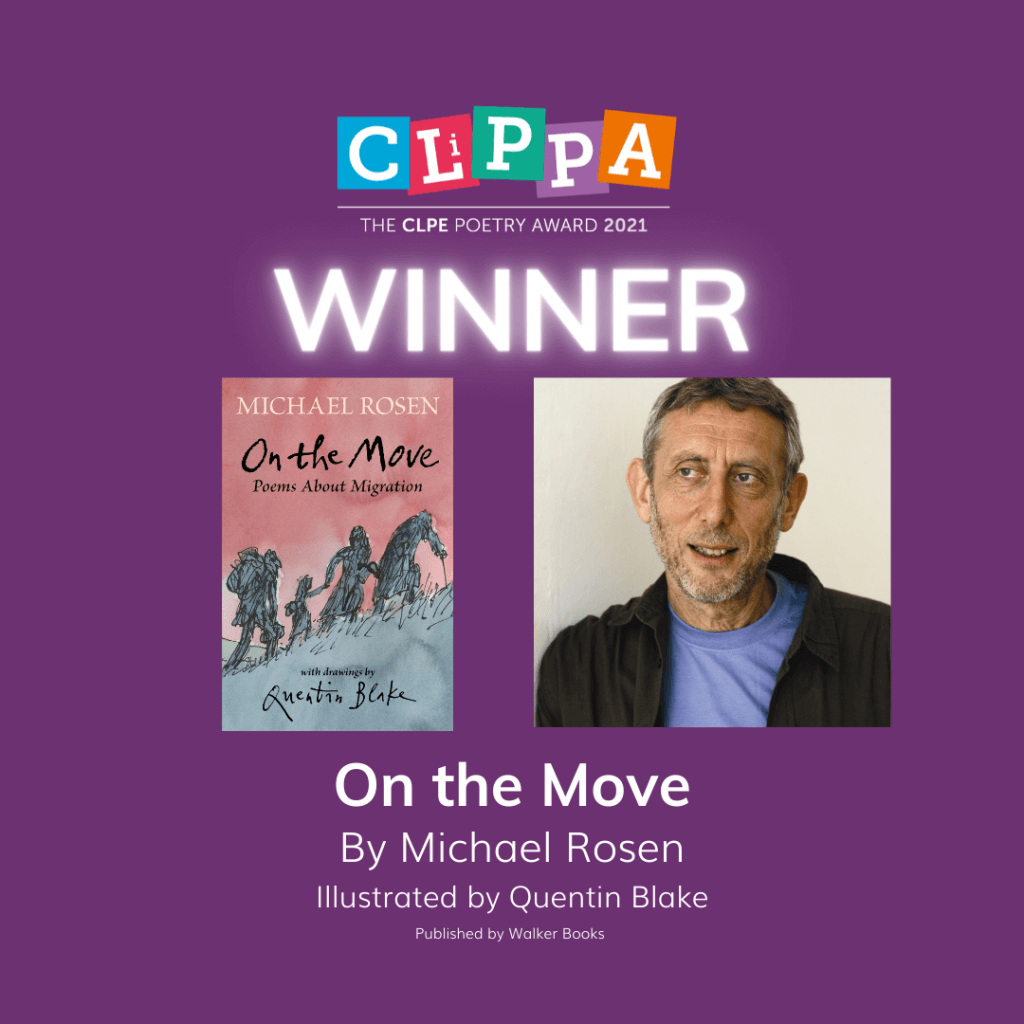 Michael Rosen is the winner of the UK’s leading award for published poetry for children, CLiPPA (Centre for Literacy in Primary Education Poetry Award). He received the award, announced at lunchtime today, for his collection On the Move, Poems About Migration, (an ACHUKA Book of the Day on 8 Oct 2020), published by Walker Books and illustrated by Quentin Blake.

On the Move explores Michael Rosen’s own past, as the son of a Polish-Jewish family growing up in London, and includes poems about his “missing” relatives, who lost their lives in the Holocaust. After these very personal poems, the book’s last section, called On the Move Again, connects his experiences with migration around the world to explain that we are all, always, on the move.

Allie Esiri, chair of the judges, anthologist of the bestselling A Poem for Every Day of the Year series, says, “The very best poems are rockets which can propel us to worlds — real and imagined — that are different from our own, and maps which can guide us to better understand the emotional, social, or political terrain around us. The shortlist for this year’s CLiPPA was extremely strong, showcasing outstanding poetry, but the judges were unanimous in choosing On the Move as the winner for theway in which it situates us, with striking immediacy, within Michael Rosen’s own personal recollections of migration, and invites us to consider the plight of others forced to be on the move today. In a period in which migration is continuously reshaping our ideas of belonging, heritage and identity, this book serves as a timely — and timeless —reminder of our kinship with our fellow humans of all backgrounds for readers of all ages.”

Fellow judge, Julie Blake, co-founder and Director of Poetry By Heart said, “These elegantly understated poems speak of the universal experience of migration that is to be found in every family’s history. Quentin Blake’s illustrations shimmer and haunt as much as the words, image and text connected and disconnected in a way that perfectly evokes the connections and disconnections of migration. This is a book to bring adults and children together to ask, “What’s my history, where have I come from?”

Michael Rosen has won the CLiPPA once before—in 2016, for A Great Big Cuddle, also published by Walker Books and illustrated by Chris Riddell—when the award was shared with Sarah Crossan for One (Bloomsbury). This year’s win comes after a life-changing eighteen months for Rosen, who fell ill with Covid-19 in March 2020, spending two months in a medically induced coma. He was just beginning his recovery when On the Move was published last October. His experiences are described for children in a forthcoming picture book, Sticky McStickstick (Walker Books) in which he describes having to learn to walk again.

His win was revealed today, Monday 11October, in a live Poetry Show, part of The Times and The Sunday Times Cheltenham Literature Festival and introduced by Allie Esiri and CLiPPA judge, poet Zaro Weil, winner of the 2020 CLiPPA.

Louise Johns-Shepherd, Chief Executive at CLPE said, “Poetry for children is booming. It was another record year for submissions and the 2021 shortlist is outstanding. Here are five books that in their different ways show children just what poetry can do, bringing both joy and understanding. The direct involvement of children is central to the CLiPPA and it is inspiring to see more and more schools participating in our Shadowing Scheme. We were extremely moved that Michael took part in the announcement of the shortlist at the Poetry By Heart ceremony at The Globe, performing in front of a live audience for the first time since falling ill and that he is here today to perform live at The Times and The Sunday Times Cheltenham Literature Festival. Michael has done so much to inspire children with a love of words and poetry and On the Move is a collection that will be read and shared for many, many years to come.”

Michael Rosen receives a trophy and a cheque for £1000. As part of the prize he will also be recorded for the prestigious National Poetry Archive.

The CLiPPA is delivered in partnership with the Authors’ Licensing and Collecting Society (ALCS) and
supported by Arts Council England.